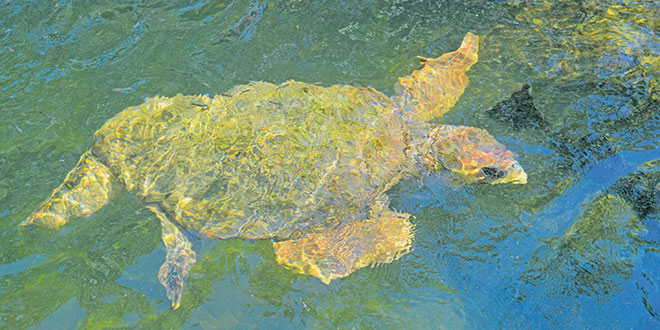 A sea turtle makes its way across a reef this past summer. Photo by Bob McConville

A short while ago I wrote an article about the decline of the coral reef system in the Florida Keys. Included were some pictures that actually showed a section of a reef and how dramatic the change occurred over a 20-year period. It was not good. The brightly colored corals of yesterday are now gray and brown.

Unfortunately, this is not just a local problem. The vitality of coral reefs and their sensitive ecosystems worldwide are in trouble. Stable levels of sunlight, the proper amount of salt content (salinity), warmth and cleanliness all combined and allowed corals to evolve. These waters need to remain undisturbed and pristine for survival to continue here. A balance must be maintained among all of the plants and animals. If this perfect combination is disturbed the polyps on the corals are affected, and may be eaten by predators, subjected to diseases, or simply become too stressed and die.

One extremely healthy reef about 100 miles off the coast of Australia was noticed in the 1970s. Recent dives to that same structure show little signs of life. The fish are gone because there is no nutrition for them from plants. The bigger fish that eat the little ones have moved, or perished for lack of food, as well. Every living thing pays a price when the balance changes.

In mid-August I had the opportunity to visit a reef near Islamorada in the Keys, a structure that I’ve explored on several occasions. An improvement from several years ago. To me, and maybe it was just the day that I was there, the variety of fish seemed less. However some entertainment beneath the waves was evident. A barracuda ambled up to some coral, stopped and bared its teeth. Some small fish, called gobies, immediately appeared and began to clean the predator’s teeth. It seems that the coral is a cleaning station, where the gobies seek shelter but emerge to clean bacteria from the barracuda. A short while later, watching a different barracuda, the predator made a lightning-fast left turn toward a school of fish and, in a matter of a second or two, caught and completely ate one of those fish!

While in the Keys I had the opportunity to speak with some environmentalists who shared that coral was being planted and raised in the bayside waters, then replanted at some reef locations.

I asked if this was a positive step and the 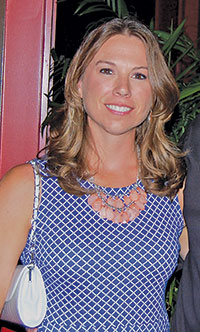 answer was that it would, at least, neutralize the loss of existing coral…hopefully.

On a brighter note, other positive steps are being taken, some right here in our backyard. Just last year, after considerable study and under watchful eyes, the beginnings of an artificial reef took place just offshore in our county.

In January 2015, the first artificial structure was deployed in the Gulf waters. By October, 36 reefs weighing 500 tons each were in place. This is one of the largest programs ever undertaken in the Western Hemisphere and it is right here in our own backyard. It will prove to be an important addition to the region.

For years old boats and other items were intentionally sunk in our waters to provide potential homes for our fish. Since most of these structures were made of wood or metal, the lifespan was limited to just a few decades. The new program has more bite, more longevity, since the reefs are made of limestone and concrete.

As South Florida grew, so did the demand for fishing. By providing a habitat for our area fish, there is a reason for them to remain in the area, a new balance is being established and the hope that overfishing will not be an issue here.

In the works for nearly three years prior to conception, a key core of professionals assured that everything would be perfect. One of those people is Katie Laakkonen, an Environmental Specialist for Collier County. In addition to planning Katie actually dove the potential locations to determine proper soil content and that the base would be suitable for a new reef. She was an integral member of an elite team.

I am pleased that Katie will be joining me at the Marco Island Historical Society’s Rose History Auditorium on September 21st at 7 PM to talk about this project, its environmental value and its economic impact on South Florida. Please join us for this special event. It is sure to be enlightening.

Join Bob McConville on September 21st at 7 PM at the Marco Island Historical Society auditorium as he welcomes special guest Katie Laakkonen, an environmental scientist with Collier County. Katie was instrumental in the research regarding the artificial reef project established here last year, and will have an informative presentation regarding the structures and what they mean to our ecosystem.