Florida Panthers: Their Right of Passage 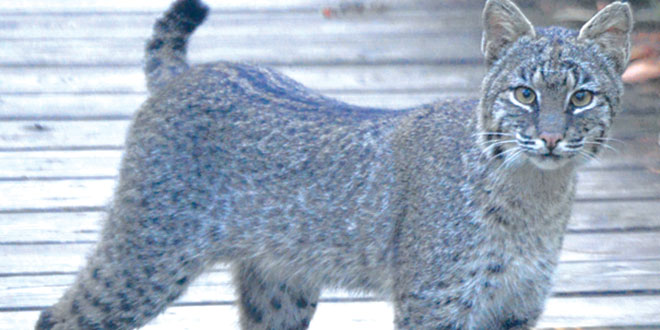 Seen in the Big Cypress Swamp, this young bobcat could be mistaken for a young panther since both can be dark in color and have darker spots. This bobcat has a very short tail while the panther does not. PHOTO BY BOB MCCONVILLE

As I watched the morning news over the Thanksgiving holiday, I learned that yet another Florida panther died on Collier Boulevard from injuries sustained by a motor vehicle. It was the 20th such death this year. The broadcast continued by stating that there are now less than 160 panthers remaining in southern Florida. Other sources place that number at less than 100. In a time when we were giving thanks for family, friends and the good things that surround us, my heart was deeply saddened.

Panther, mountain lion, puma and cougar are all names for the same species of wild cats known as Puma Concolor, and the range of these mammals included almost all of North America as well as South America in earlier times. Here in the U.S., they roamed freely and were a necessary link in the food chain. They played a role as one of the apex predators in the eastern United States until modern man arrived. During the 1800s and early 1900s, they were hunted to near extinction as their habitat disappeared and they posed a threat to livestock. They now occupy about 5 percent of their historic range.

What is now known as the Florida panther used to range all along the gulf coast and as far west as Arkansas. Today, this is the only subspecies left of Puma Concolor in eastern United States. They can be found in Everglades National Park and Big Cypress Preserve.

They are indeed, very beautiful. Their beige fur and white-to-gray chest and stomach make them easy to recognize. Black markings adorn the tip of the tail, the ears and around the nose. Males are usually bigger than females. An adult male can measure 6 feet long, and can weigh in the 150 pound range while female are smaller.

The adult female will produce 2-6 young about every two years. The young are usually born in a densely vegetated area to provide cover from other predators. They are very dark at birth with even darker spots to help keep them well hidden. Kittens are known to stay with their mothers for 12-18 months. Mom is a great teacher, and the young learn all of their hunting skills and techniques during this time. Sexual maturity takes place around two years of age, and life expectancy in the wild is 10-12 years.

Very young panthers are often confused with young bobcats because of the similar colorings at that age. The panther has a full tail while the bobcat’s is much shorter.

The southern Florida habitat diversity is ideal for panthers. They can be found in cypress swamps, mangrove swamps, marshes, upland forests and 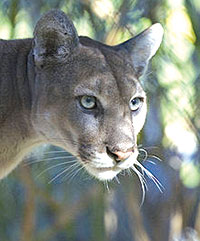 The primary source of food for the panther used to be white-tailed deer, wild hogs, many smaller mammals, and they will also stalk birds. I’ll say again, this used to be their primary food source. Due to the development of industry, farms and cattle ranches south of Lake Okeechobee, their food source has changed. The natural flow of water across the land from the lake has been modified. Wildlife that used to be plentiful is now hard to find. Diets are changing.

I met with a ranch owner in Immokalee a few weeks ago who told me that 13 percent of his young calves are lost each year to panthers. Adult females are teaching their young to hunt not deer but calves. I am sad for the losses experienced by ranchers, but sad with a caveat.

It was mankind that changed the living conditions of Puma Concolor nationwide. It was mankind that decided to settle south of Lake Okeechobee, to adjust the landscape and take away what nature had developed over a 5,000-year period. It is not the panther’s fault that its lifestyle and food supply, have been interrupted for the sake of human expansion.

It is the panthers’ right of passage to have its habitat retained, even redeveloped. We are the intruders, not them.

As sad as I am for the 13 percent loss of calves, it may be the necessary catalyst to begin anew — the stepping stone needed to prompt additional action to rebuild our panthers’ home before it is gone. Canals were dug and lands were cleared to provide grazing fields for livestock. The landscape was changed forever, and the panther was forced to adjust. Maybe a few calves is a fair price to pay.

East Naples is expanding, and more than 5,000 new homes are going to be built in the not so distant future. More land will be cleared, and again, the panther will need to adjust. When these new residents see a panther in their backyard they shouldn’t say “I’m afraid.” They should, instead, say “I’m sorry.”

My heart was saddened by the recent death of one more panther. Too soon it may be one too many.

Bob is the owner of Stepping Stone Ecotours and a naturalist on board The Dolphin Explorer. Here is a proud member of Leadership Marco 2014 and Bob loves his wife very much!