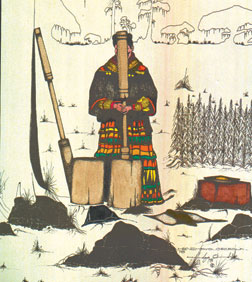 I’ll start by telling you that it has been my great honor to chair the Gallery Committee at the Marco Island Center for the Arts these past two years. I work with exceptionally creative men and women dedicated to bringing interesting, enlightening, and energizing exhibits and events to ‘’The Center.‘’

In March, 2011, during a brain-storming session, Ken Stroud, President of our Board of Directors, suggested to the committee an exhibit of work by Seminole artists. Sure, I think, this is a wonderful idea. I’m a Florida gal, I know people who know people, etc. Absolutely!

I first called J. Robert, musical icon, gentle rascal, and the perfect liaison to artistic organizers for the Seminole Tribe. He put me in touch with Helene Buster over in Hollywood. After I explained the proposal, she kindly put me in touch with Bobby Frank, who had some serious questions, some of those answers being: no, we don’t want to determine the styles, the motifs, or the mediums; yes, we are as interested in traditional imagery as we are in modern Tribal voices; yes, committee delegates are willing to drive to Big Cypress to meet with you and a group of artists.

In April, Frank put me in contact with Holly Tiger Bowers who invited me to come to Big Cypress in May to jury an art show at the Seminole Spring Festival. It seemed a proper offer, and honor – not just to visit, but to participate in their art event, and meet with artists – I accepted.

Accompanied by Island artists and fellow committee members, Betty Newman and Sandy Moore Howe, we made the journey to Big Cypress, saw amazing art, and met amazing artists. After the art festival we held a meeting under the big chickee. It was agreed Tribal members would travel to Marco in June to view the venue and further discuss details at a luncheon hosted by the Marco Island Hilton.

The details, at times, have seemed endless. When titles for 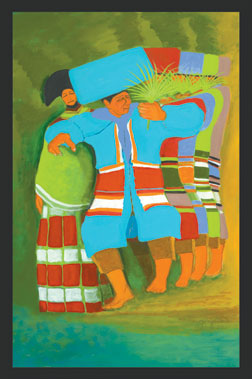 the exhibit were presented, Mr. Frank was adamant about not limiting it to Seminoles. “We have Miccosukee artists, and we have artists with Creek heritage, and others that claim no formal tribal affiliation, but they live and work here in the Everglades.” He also wanted to keep the door open for future shows encompassing more Native American artists, from Florida and beyond. By August, Florida Native Americans: Artists of the Everglades was formalized.

Beyond this, was the no small matter of assembling a group of artists, most of whom have never exhibited outside of Tribal venues, were not devoted to the demands of cell phones and emails, and who did not possess the sense of urgency so prevalent in these do-it-yesterday times. They had experience attracting people into their world, but according to the several artists we spoke with, had never been invited to exhibit outside the Tribe.

Deadlines for submissions were set, moved, moved again, and once again. A real finish-line nail-biter. Although frustrated at times, both Bobby Frank and I were determined to make this most important exhibit a reality, and The Center was also willing to make whatever accommodations necessary toward such ends. And now, a full year later, a very good idea has become a hard-won reality.

Over the years The Center has hosted several exhibits about, or inspired by, Florida’s Native Americans, but never an exhibit by our native neighbors. This exhibit, which includes, painting, photography, jewelry, carving, and mixed-media, will be on display throughout the month of March; a reception for the art and artists will be held Tuesday, March13, 5:30-7PM, it’s free and open to the public. Be our guest – I insist.

Tara O’Neill, a lifelong artist, has been an area resident since 1967. She holds Bachelors’ Degrees in Fine Arts and English from the University of South Florida, and currently has a studio-gallery at the Artist Colony at the Esplanade on Marco Island. Contact her through www.taraogallery.com