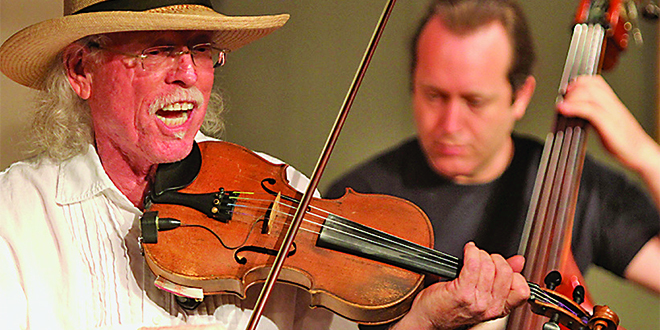 The show is part of the Marco Players’ Lunchbox Series that includes a box lunch and question and answer session following the performance. JRobert had the audience eating out of his hands long before the lunch arrived. Marco Players’ Board of Directors President Beverly Dahlstrom knows she has a hit on her hands. “We’re very happy to have JRobert partnering with us,” Dahlstrom said.

JRobert is a fourth generation Floridian who has entertained audiences on Marco Island since catching on at the Marriott in 1986. During the Florida Fiddler Show he calls upon the people skills he honed at the Marriott and at countless gigs at the Snook Inn and the Little Bar over the years. He knows how to entertain tourists and locals alike. But don’t think entertaining a Marco crowd is old hat to him. He admitted to being nervous just before going onstage with his fiddler show.

“I’m extremely nervous,” Houghtaling said just before stepping onto the stage Saturday. “I’m not nervous about my playing. I’m nervous about what I’m going to say.”

The nervousness may have shown during the early minutes of the show as Houghtaling’s clever remarks were met with scattered chuckles and his musical interludes started to warm up the audience. About a quarter of the way through his performance, though, Houghtaling was in a zone and the audience was totally engaged—and they stayed that way until he finished with his trademark Florida Fiddler song.

Judging by the crowd’s reaction, they would have loved it.

“Being the son of a son of a Florida farmer, I have many, many stories,” he said. “I remember Immokalee when it was a trading post. Immokalee is the Seminole name for ‘My Home.’ The big hunters would come in with stories from Lake Okeechobee. The big alligators.”

Houghtaling then played a beautiful song he wrote about Immokalee, “Son of the Everglades.”

“Is it anybody’s birthday out there?” Houghtaling asks. No one reacts. “Rats. Oh well, it happens to be mine,” Houghtaling said, sending the already worked-up audience into a frenzy. “I’m 67 today and don’t feel a day over 66.” The audience erupts in laughter and applause and the Florida Fiddler is feeding off of their energy. 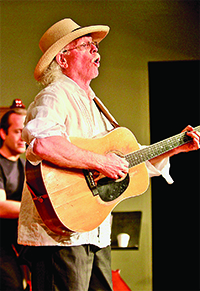 Hopalong Cassidy?” A lady in the back shouts, “How about the Cisco Kid?” And the party continues. “Boy I’ve got these guys rollin’,” Houghtaling says.

Houghtaling intersperses original songs with classic songs from the past 100 years, using his fiddle, a 1967 Martin guitar, a steel guitar and a mandolin. Even a little yodeling. And the crowd is lapping it all up.

“I’ve seen a lot of folks come in, migrate in from someplace, we all come from somewhere,” JRobert says. “Looking for a little bright light. Well, you get that sand in your shoes…”

Then it’s time for an original.

“But no self-respecting cracker son of a Florida farmer would go without having his own tune up his sleeve,” JRobert said before launching into an original. “I’m a cracker, by crackey…I was born in a barn and raised in the woods, down US 41…it’s the Florida sand I love best…I’m an old conch shell that’s startin’ to smell…. I love sunshine, a warm gulf breeze, yeah, and mangrove trees…I’m a cracker,
by crackey.”

At the end of his set Houghtaling said, “Well, we better wrap things up.” The crowd moaned. He reassured them. “There’ll be more shows,” he promised. Then asked, “How many of you folks flew down from way up north?” After a majority of the crowd raised their hand, he joked around about air travel before introducing his second-to-last song.

“You know they used to use trains,” he said. “And they ran on time. And they were safe. They were the most amazing transportation invented—and they still are. Well, probably the most famous train down in this neck of the woods was the Orange Blossom Special. The train was so famous, they had a song about it. It took a fiddler to write the Orange Blossom Special, Ervin T. Rouse. It started in Washington, D.C. and stopped in Naples, Florida. It ran from the 1920s to the 1960s.”

But just as he thought he was finished, Houghtaling’s son Martin, who ably accompanies his father on an upright bass, reminded him about the real finale.

“This is one I forgot,” Houghtaling said, “The Fiddler’s Lullaby.

As the happy crowd files out to pick up their lunch, a lady is overheard saying, “He certainly can fiddle around, can’t he?”

One happy patron was Lee Porter, a Ft. Myers native, born in 1948. Porter’s father owned the original hardware store in Ft. Myers. “My father bought it in 1946, the former owner started it in 1887. I grew up in that hardware store. The Seminole Indians would come in and trade with my dad. Chief Osceola, the family, the kids and everyone. Nails, shotgun shells, tools. Marco wasn’t here then. We used to fish down here as kids. There’s so much of what (JRobert’s) doing that I remember all my life. The history. It’s really interesting. I love it.”

On this Saturday afternoon, he certainly was not the only one.