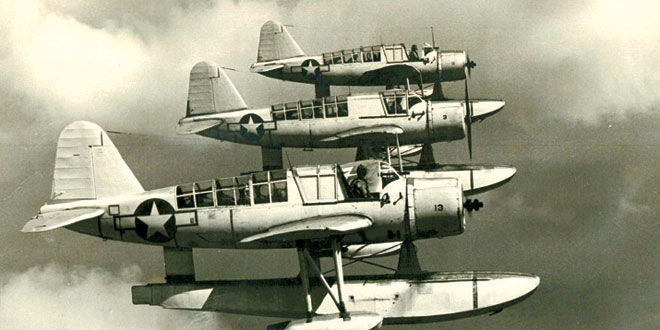 As we reflect on a peaceful Veteran’s Day with great weather and our local beaches full, it is hard to envision a time when Florida skies were full of fighter pilots, our coasts under constant watch for enemy attack, and U.S. sailors both dead and wounded were being brought into Florida hospitals. World War II was not only fought in Europe and in the South Pacific, but was also fought here at home. Few remember that Nazi Germany brought WW II literally to our shores, with U-boats (submarines) paroling up and down our coasts looking for allied ships to destroy.

Along only a portion of Florida’s coast, in 1942, eight freighters carrying cargos including phosphate, lumber, lead, tanks, trucks, airplanes, ore, sugar, and general cargo for the war, along with eight tankers carrying millions of gallons of oil, aviation fuel, and even drinking water were attacked and most were sunk. These 16 ships fought their battles just off of Florida’s eastern shore, south of Cape Canaveral and north of Ft. Lauderdale – a distance of a little over 150 miles. At the bottom of the Atlantic Ocean today are shipwrecks off of Cocoa Beach, Jupiter, Cape Canaveral, Melbourne, St. Lucie, Delray Beach and Boca Raton. 158 seamen and crew were killed off the Florida coast during one year, 1942, in these 16 vessels. After the war, German navy records show that the commanders and crew 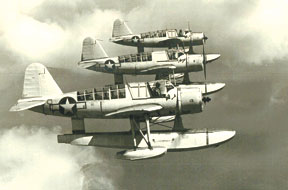 of seven U-boats were involved in the attacks on the 16 ships. German U-boat commander Peter-Erich Cremer in charge of submarine U-333 attacked three of these vessels; on May 5, 1942 close to midnight he heavily damaged the first, the Java Arrow, a tanker, at 3:40 am in the morning of May 6th he sank a large freighter, the Amazone, and a few hours later at 4:55 am he and his crew sank a large tanker, the Halsey carrying 3 ½ millions gallons of oil. Cremer would later recount what happened in his book: “U-Boat Commander: a periscope view of the Battle of the Atlantic.” Regarding the sinking of the Amazone he would write: “The boat sank like a stone.”

To stop the destruction, save lives and insure the safe passage of war materials, the U.S. Navy equipped and flew squadrons of the Vought OS2U nicknamed the “Kingfisher.” The plane had a pilot and a radio man/gunner and carried two 325 pound depth charges under its wings and had a range of 805 miles and a maximum speed of 164 mph. Piloting one of them was Lieutenant JG William D.C. “Bill” Blair of Grand Forks, N.D. who had finished flight training in Pensacola, Fl. Bill now resides on Marco Island and was recently honored by being one of twenty veterans whose portraits were painted by Malenda Trick as part of Iberia Bank’s Veteran Portrait Project, a celebration of our local veterans. 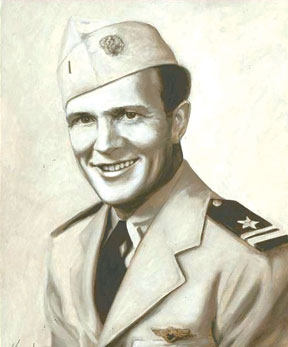 Bill explains the mission: “Flying south of Cape Canaveral, off the coast of Miami we would pick up convoys of ships coming out of Galveston and other ports in the Gulf of Mexico. Our planes would lead the convoys east into the Atlantic Ocean as far as our fuel would take us. After leaving the convoy we would fly back to “The Rock” now known as Walker’s Cay in the Bahamas.”

The German submarines were diesel powered and would run on batteries when submerged to conserve their oxygen for their crew’s use. During the day using batteries the U-boats did not have the speed to keep up with the convoys, but at night when they came up for air and started their diesel engines they could run much faster. It was no coincidence that German U-boat Commander Cremer’s three battles occurred in the middle of the night. His and the other U-boats also refueled at night by use of “milk ships” or German mother ships.

Dusty Rhodes of Marco Island, a Navy aviator flying out of Jacksonville in the 1960s, explained the secrecy: “During WW II there was little to no publicity regarding the presence of German subs off our coasts because the government frankly did not want to frighten our citizens.” He explained that even when he was flying similar missions looking for and tracking Russian nuclear subs in and around Florida there was no publicity for the 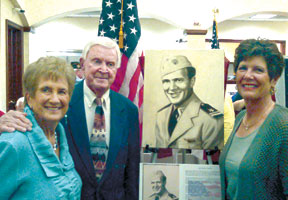 Photo of Bill and Miff Blair, with his portrait and daughter Bonnie Woodward. PHOTO BY CRAIG WOODWARD

same reasons and even today, unknown to the public, U.S. Navy airmen remain in the air to monitor and safeguard our coasts.

In 1944 Blair was forced to land his Kingfisher in the Atlantic Ocean as his radio man/gunner called “Mayday! Mayday! Mayday!” over their radio. Their single engine had mechanical problems and they floated for nine hours in the Bermuda Triangle before being rescued by a U.S. Torpedo boat and taken back to “The Rock.” Blair and two other fellow pilots flying in formation were photographed by Newsweek. The photograph appeared on the cover of that magazine and was titled “The Perfect Formation,” he is flying the closest plane #13.

Bill Blair’s portrait and story along with the 19 other veterans will be exhibited at the Marco Iberia Bank branch until November 16th, then in Iberia’s North Naples branch on Pine Ridge Road for a week, moving on November 29th to the Naples Backyard History Museum on 3rd Street South until early January 2013. These 20 excellent paintings done by artist Malenda Trick are well worth seeing. If you are unable to visit them, I suggest you view the slide show of them at her website:malendatrick.com/vets2/index.html

I want to thank Bill Blair, who I am fortunate to have as my father-in-law, for his information for this article, as well as thank Dusty Rhodes, Malenda Trick, Keith Dameron of Iberia Bank and all of the veterans and heroes who have served our country and preserved our freedoms.