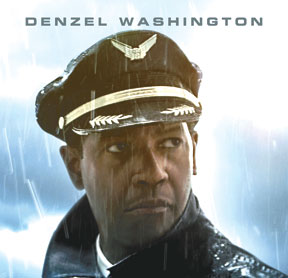 Don’t be fooled by the title. “Flight” has very little to do with aviation; it has a lot to do about character, lies and deception, and morality. And, it’s beautifully done.

The superb Denzel Washington plays “Whip” Whitaker, a first-rate airline pilot who is also an alcoholic, drug user and carouser. In the opening scene, Whitaker awakens after a night of sex and booze, lights one of innumerable cigarettes, gulps down a drink and snorts some cocaine. His lady of the night, a flight attendant, reminds him that he has a trip coming up and that he has to hustle to the airport. He arrives looking crisp and professional, but is heavily hung over. His co-pilot, a born-again, is somewhat appalled, but has to defer to the captain.

The flight is a disaster. Shortly after takeoff, Whitaker nods off, only to get jolted awake by a fierce storm. The aircraft breaks out into the clear thanks to some expert maneuvering by Whitaker. He goes into the entrance of the cabin to reassure the panicked passengers while he secretly sneaks vodka from two miniatures into some orange juice. When he returns to the cockpit everything goes awry. The aircraft becomes almost unflyable, and loses thousands of feet of altitude. Whitaker manages to make a crash landing thanks to some magnificent flying. Four passengers and two flight attendants die in the crash, but more than a hundred are saved. The scenes, well filmed inside the cabin as the aircraft begins to fall apart, are terrifying.

The remainder of the movie revolves around Whitaker’s life as a cocky, talented, narcissistic, liar. He’s divorced; has a young son from whom he’s estranged; and gets his drugs from a “candyman” beautifully portrayed by John Goodman.

Since Whitaker recovers in a hospital he is given a toxicology test, and both booze and cocaine show up. Enter a representative of the pilots’ union and the union’s lawyer (Don Cheadle). They work to suppress the report and clear Whitaker of any blame for the accident. Meanwhile Whitaker meets an attractive young heroin addict and takes her to his father’s empty farm. There she tries to get him to kick his habits, even as she gets straightened out. He rejects her and she leaves him.

Whitaker continues lying, covering up and denying. It’s difficult to think of anyone other than Denzel Washington to carry off this role. He does it in varying ways: his walk changes when he gets high on drugs, and he seems perfectly normal. However, when the drug wears off he stumbles and shuffles. He reacts angrily to any helpful suggestions; he pities himself and he rejects those who want to help him.

As viewers we detest his conduct and his continuing descent. At the same time we are rooting for him to become the charmer and upright character we occasionally glimpse under the dark cloud.

How it all comes out is fascinating. The movie never falls flat in studying the character of a flawed human being. Without exception the performances of Washington, Goodman, Cheadle and Kelly Reilly as the young addict, are superb. To me “Flight” stands for flight from reality. Judge for yourself.