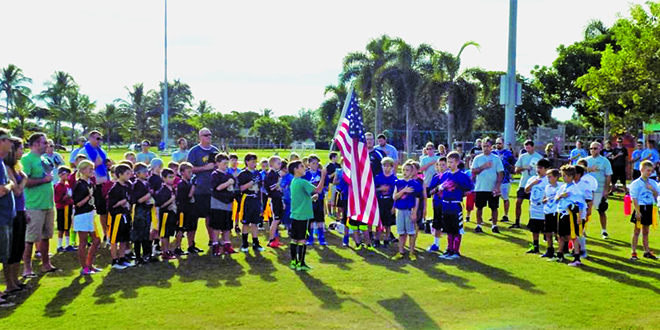 Photos by Morgan Gastineau: The National Anthem starts things off.

Bruni calls a play for his team, on which his son Jake plays quarterback (wearing do rag). The coaches call each play, remind players of their assignments, and make sure they are in the proper positions before the ball is snapped.

On most fall Saturday mornings, you will find Mackle Park with end to end football games going on. The kids aren’t butting heads and knocking each other around, but they are having a lot of fun. They are taking part in what has become a national craze – flag football. Instead of tackling the runner, the kids try to grab a banner tucked into the ball carrier’s pants. The program is run for kids (it is co-ed) from 6 to 12 by the Optimists Club of Marco Island (OCMI), and has replaced a previous tackle football program. Meghan Bonos was brought into OCMI as director of soccer in 2014 (she has since become president). At about the same time, OCMI cancelled its tackle football program. Registrations had been declining, and studies regarding head injuries, some causing death in young players, had been published. Sports Illustrated was especially aggressive in its reporting. Bonos, who with her husband Tom had participated in a flag football program in Pennsylvania, stepped into the breach and started flag football on the island. “After some convincing [the OCMI board] agreed to let me start a flag football program,” Bonos said, “Tom 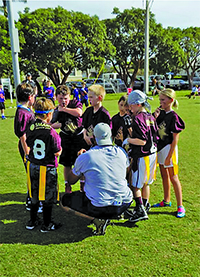 Bruni calls a play for his team, on whichhis son Jake plays quarterback (wearingdo rag). The coaches call each play,remind players of their assignments, andmake sure they are in the proper positionsbefore the ball is snapped.

and I wanted to try and duplicate the program in Pennsylvania. It had taught the kids football and really built a community around the sport.” The OCMI board made it clear that they would monitor the program and see how things went. Things went swimmingly. The first year (2014), 35 kids signed up. The next year, registration doubled to 70, and this year 105 boys and girls are on board. The parents had warmed up to it and brought their kids to play each Saturday, setting up folding chairs and cheering them on. “It was a great way to bring the community together around the game of football,” Bonos said, “but without the elements of contact and significant safety concerns. The kids want to stay active. This was a great way for them to play another sport.” Meghan Bonos keeps a close eye on all of OCMI’s athletic programs. She maintains direct supervision of the soccer program but came up with a dandy, to direct the operations of flag football. Bob Bruni has become the heart and soul of the program. She and Bruni became friends four years ago, and he was quick to inquire as to what could be done to revive the kids’ football program.

Bruni, the son of a career Philadelphia policeman, was born in Norristown, Pa. and grew up on the border of Philadelphia. Graduating from Bishop Kenrick High School (900 students) in 1989, 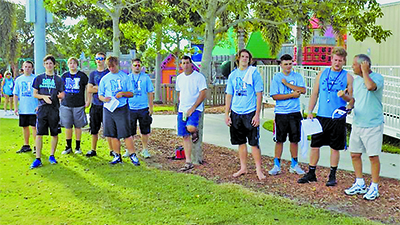 MIA footballers wait for assignments to referee the games.

he lettered in both basketball and football, playing outside linebacker and corner back on the football team. Kenrick, in Norristown, Montgomery County, is part of the strong Philadelphia Northern Catholic League. Bruni made the all- Catholic team as well as the all-Montgomery County team. He also won the prestigious Genuardi Sports award as the best high school athlete in Montgomery County. Genuardi’s owned a chain of supermarkets in the northeast. There was always a lot of hoop-la concerning this award – a tough ticket. After two years of criminal justice courses at Montgomery County Community College, Bruni worked for the Montgomery County Sheriff’s Office until 1998, when he landed a job with FedEx, where he still works today. (He got FedEx to transfer him to Naples in 2000.) In 2006, Bruni married Tina DeMalavez, his Norristown High School sweetheart, who was all-league in cross country and track and field. A son Jake was born in 2007. Tina brought along 7-year-old Cody, from a prior marriage. Both boys are superb athletes. In addition to raising their family and assisting Bruni in running the flag football program, Tina sells real estate on the island. Meghan Bonos considers Tina as part of the package. “I knew that Bob and his wife, Tina were big advocates of youth sports,” says Bonos, “They have worked really hard to make this a special program for the kids.” Tina does the paperwork, collecting fees, 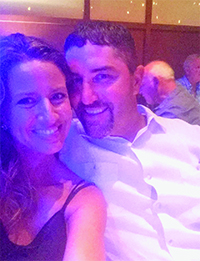 registrations, sponsorships, and paying the bills. Bruni, who is also the Optimists’ basketball director, currently acts as a volunteer assistant coach for the MICMS football team – not a lot of free time. I took a shine to Bob Bruni the first time I met him at Mackle Park. He is enthusiastic, ebullient, and brimming with ideas. I grew up about 10 miles from him, and his deadpan Philly accent was music to my ears. Wherever I have lived, the accent always gets my attention – Philly is family. (Meg Bonos comes to us from another Philly suburb.)

So what is going on with flag football? The league, now in its third season, has 10 teams – six teams of 6 to 9’s and four teams of 10 to 12’s. This year, the season runs from September 24th to November 12th, followed by the Thanksgiving Classic All-Star Game, November 26, under the lights at Winterberry Park. The kids love playing at night. The coaches are all volunteer fathers, who hold once a week practices. In a new twist, football coach Damon Coiro shepherds the MIA footballers over on Saturdays to referee the games and keep order on the field. The teams are named after old USFL League teams, with corresponding colors and logos on shirts paid for by local sponsors. Bruni’s team (yes, he coaches too) is named for the Philadelphia Stars. They play on Saturday mornings at

A running play unfolds. The yellow banners must be pulled off the runner to end the play. No blocking or stiff-arming is allowed; the runner has to be fast and innovative.

Mackle Park. Those sun splashed mornings are quite a spectacle. The day begins with the singing of the National Anthem at midfield, after which the teams go to their designated fields of play. “Every Saturday morning, the grass at Mackle Park is lined with parents and grandparents, who get there early to secure a spot on the 50-yard line or end zone to see their kids playing,” says Bonos, “After the game, many of the parents get together at a local sponsor’s restaurant. They have built a true football family and really look forward to Saturday.” The teams, consisting of nine or 10 players, compete on fields 70-feet in length. They play four quarters of running clock – 12 minutes each. The coaches are right out there with them, calling the plays and setting the players in proper position. No blocking or arms to the face are allowed. Interference for the runner is more like a moving shield. All the players wear mouthpieces. “[Since the program began three years ago] we have had no injuries,” Bruni said. He hopes however to bring back an Optimists full contact U10 team, and if successful, to expand it. “The kids coming into 6th grade never played [tackle football] before,” he says, “I think it would be a good idea to give them this experience before entering middle school. It would strengthen the feeder program for both MICMS and MIA.” It seems there is a new football dynamic in town.