Fishing with the Kids 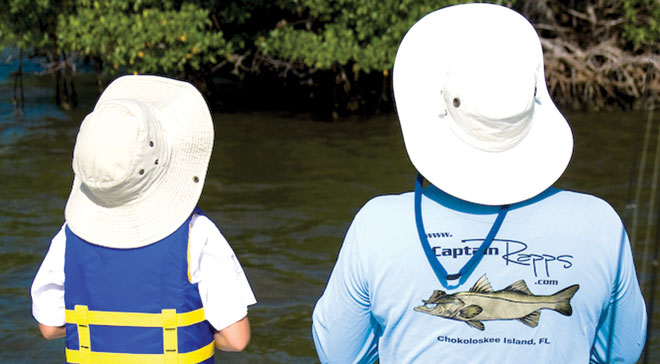 When I was young, my grandfather used to take my brother and me fishing as often as possible. He loved to have us out on the boat. Sometimes he would take us out to the shallow reefs and we would drop cut squid or live shrimp down on a small hook. We would have a blast reeling in grunts, porgies, snapper and the occasional trigger fish. We would laugh and giggle as we pulled in one after the other on every drop down. What a blast!

Other times, my grandfather would take us out for big fish. He would tell us we were going to try to catch big wahoo, kingfish, and mahi mahi. We were not going to bring the small reef gear…. We only had room for the big rods. We would get all excited and could not wait to get out there and see fish brought into the boat as big as us.

Shortly after we would get out there, the big rods were set out on outriggers and down riggers, and we would troll at slow speeds. “How long would it be?” we always asked impatiently. “Hopefully soon,” grandpa would always reply. Some days it seemed like we trolled for eight hours only to catch a fish or two. Sometimes more, sometimes none. For us kids, it was BOOORINGGGGGG! Possibly because he had us all doped up on Dramamine, but truthfully there was really nothing for us to do and we began to despise it. We got to the point that we were losing interest in fishing altogether because of the long trolling trips. We didn’t care about the trophy fish, we just wanted action.

That was 30 years ago and now I have been on just about every type of fishing trip imaginable. I still have some fish to catch on my “Bucket List.” but I have grown more patient and understand that fishing is called “Fishing” for good reason…… it’s not called “Catching!” On my days off, I enjoy being out on the water and realize that fish caught are just a bonus.

When taking kids out on charters, I understand from my own experiences that it’s all about putting them on constant action. They need fish right away, not a 50 minute ride to the trophy spot. If need be, I am happy to make the casts for them, but they need to hold the rod and feel the bite. They need to reel in the fish and feel it wiggle. They don’t care that it’s not a big snook or redfish. It could be a catfish, jack, ladyfish, or a tiny little snapper. As long as it takes the bait and wiggles, it’s exciting. I never let them know what we consider trash or undesirable fish. You just have to keep them excited.

So next time you take the kids out fishing on your boat, forget the trophies for the day, keep the trip short and just put them on fish!

Fishing Forecast for May