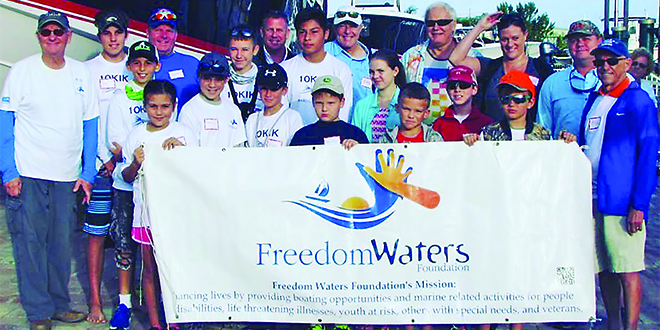 Ed Lindemanis experienced a milestone on a recent Sunday morning in the waters off of Marco Island.

The 8-year-old went fishing for the very first time and was lucky enough to land a fish, a real keeper that he took home for his family to grill and enjoy.

“It was over 12 inches,” he crowed joyfully, as his father Arthur looked on. “It was just the best day of my life.”

Ed’s special day was shared with seven other children between the ages of 5 and 13, all of them with medical or special needs, thanks to the 10KIK Fishing Team, several Marco charter captains, the Juvenile Diabetes Foundation and the Freedom Waters Foundation, which provides therapeutic marine-related experiences for people with special needs and veterans.

10KIK is an abbreviation of Ten Thousand Island Kids, a new group formed by two Marco youths, avid fishermen Everet Essi, 11, and Noah Blaskevich, 12, with help from Everet’s mother Maureen. They formed the group to encourage a love of fishing among middle-and-high school students, learn fishing techniques, hone angling skills and create strong relationships with the community and the environment.

The eight 10KIK members joined Ed, who has Type 1 diabetes, and 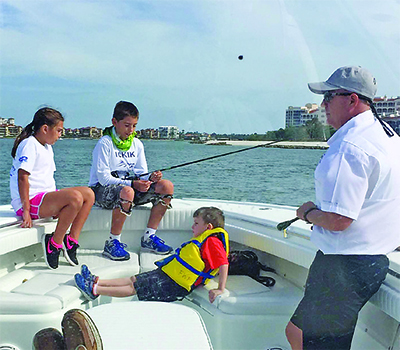 the other guests, including parent volunteers, in plying nearby waters. They fished from the boats of captains Joe Cacaro and Michael Wolner of Unreel Adventures, Erix Rodriguez from Reel Thrills, Patrick Lewis of Blue Runner and Kyle Walsh of Six Chuter, who all donated their services.

After departing from Walker’s Hideaway Marina, they cruised the areas near Rookery Bay, Hideaway Beach and on the Marco River, their fishing rods encountered sea trout, ladyfish, catfish, snook, flounder and of course, pompano.

After a few hours of fishing, everyone retired to Pelican Pier, where the owner, Chris Hadraba, had invited the group to dock for lunch, which was provided by the Culvers of Naples restaurant. The children were also able to get in some more fishing from the pier.

Ed’s dad, Arthur Lindemanis said what unfolded over the course of the morning made it well worth traveling from the family’s Sarasota home.

“He had a fabulous day because not only did he catch his first fish, but he got to see two dolphins playing in the wake, jumping, twisting, flipping,” said Lindemanis. “This program is absolutely fabulous. The kids from the Ten Thousand 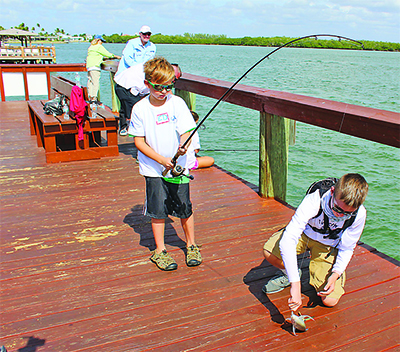 Noah was also sky high over the aquatic life they encountered.

“We saw dolphins and ladyfish jumping,” he said. “The dolphins were actually following us in the wake. They were jumping straight out of the water to catch fish. We were seeing pompano jumping out of the water and we saw pelicans jumping on the fish.”

Ten Thousand Island Kids is an outgrowth of a conversation Everet and Noah had with Maureen Essi about starting a club centered on their favorite pastime, fishing.

“I told them they had to do something for the community too,” she said.

Since then, 10KIK has amassed a core of eight youths who’ve met to plan events and devise fundraising ideas, with the fishing excursion being their first charitable gathering.

“I think it went well,” said Everet. “We didn’t catch much, but I saw the smiles on the kids’ faces so I think they had fun.”

He and his best friend Noah were thrilled share their hobby with other youths.

“I want other kids to have the experience so they know how it feels to see everything and how it happens,” Noah explained.