First Half Costs MIA in Loss to Boca Raton Christian 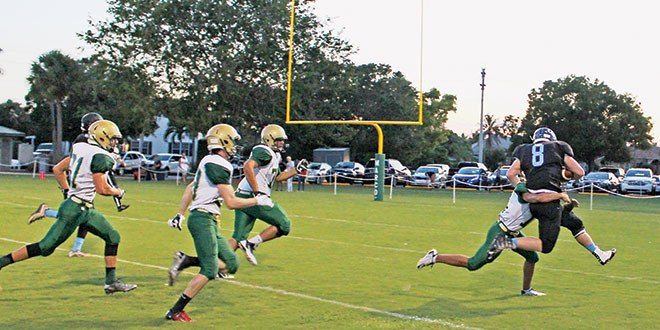 For two straight games the Manta Rays had been cancelled because of weather.

On September 9, they hosted Boca Raton Christian, whose bus broke down and the starting time was moved to 7:30.

It was one of few breakdowns that occurred on the field in the first half as Boca Raton downed the Rays, 44-34.

Against Boca Raton, the Blazers took the opening kickoff, using three passes to score first. With the extra point it was 7-0 with just 2:30 gone in the first quarter.

MIA came back with a smooth drive of their own, using an up tempo attack. With a nice pass catch by Will Carlisle and the running of Tyler Gresham and Vinnie Moller, quarterback Matt Grille completed the five-play 65-yard drive with a two-yard slant into the end 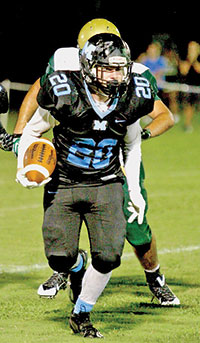 In a trick play the ball was centered to Moller behind the tackle and he ran in for a two-point conversion, giving MIA an
8-7 lead.

But seconds later Grille was injured breaking up a pass. It appeared to be a concussion and he was out for the game. Gresham took over at quarterback, without having played a down in game conditions.

It didn’t go well in the first half. He suffered two interceptions and two fumbles as Boca Raton rode to a 34-14 lead at half time. Gresham would pick up his style of play at quarterback in the second half with three long passes and key runs. He threw for 124 yards on five completions and ran for three touchdowns. Two of his passes went to Bon Deese for 88 yards.

Moller ran for 135 yards and Carlisle 77, with a touchdown.

In years past such a 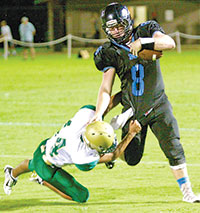 lead would have meant the Rays downfall. Instead they rallied. With a Gresham to Carlisle pass catch and the running of Moller and Gresham, with Gresham bulling into the end zone for a three-yard. It was Gresham again making good on a two-point conversion run and the Rays were back at 41-21 with seven minutes left in the fourth quarter.

The defense behind linemen Jackson O’Shea, John Roche and Kyle Ginther, who also fell on a Blazers onside kick attempt, held the Blazers and the Rays rolled.

A Gresham pass to Brendon Howard was good for 20 yards. Moller ate up another 17 and Carlisle ran 40 yards into the end zone. The point-after failed, but the Rays were now at 41-28 with 5:40 left.

The Rays, with key defensive plays by Ginther, Brendan Howard and Paul Bryson stopped the Blazers on their next drive, but a good Boca Raton punt set the Rays back on its own five-yard line.

With the clock running down the Rays

used all four downs to no avail, giving the ball back to the Blazers on the MIA seven-yard line.

The defense again took it to the Blazers, forcing a fourth-down field goal to make the score 44-28.

Still, with 1:40 to play, the Rays rallied again. Carlisle and Moller continued to gain ground and Gresham would take a broken play and run the final 38 yards for a score, but left only 11 seconds.

The Blazers quarterback took a knee to end a furious game.

New MIA coach Damon Coiro spoke of the reality of the game. He told his team, “I don’t believe in moral victories. There were a lot of positives, but in the first half we got our butts kicked.

“Many teams would have folded, but we won the second half, yet we lost. You are not quitters, but we didn’t win. We are starting to play the game the way it is supposed to be played. Let this loss resonate to where you hate losing more than you like to win.”