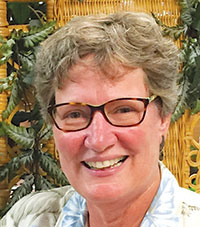 Monday was a first day of school, of sorts, for Kathleen “Karey” Stewart.

She is the new principal at Tommie Barfield Elementary School, replacing Jory Westberry, who retired in June after leading the school for 14 years.

Stewart has been a school administrator in the Collier County district for 15 years, most recently serving as principal at Pine Crest Elementary School in Immokalee for four years. Prior to that, she was principal at Lely Elementary for six years. Stewart also has 23 years of classroom experience – 15 as an elementary level music teacher, and eight years teaching third and sixth grades.

“I applied to be a principal and Dr. (Kamela) Patton [the district superintendent] placed me at this school,” said Stewart, when interviewed before the school year’s August 17 start. “She thought I would be a good fit there and I’m thrilled to be there. I can’t wait to meet the students and I can’t wait to meet the parents. I’m having a ball and I’m looking forward to a great year.”

Stewart began preparing for the 2015-2016 school year on July 6, beginning the planning process and immersing herself in all things Tommie Barfield.

“I wanted to learn everything I could about the school so I’ve been meeting every teacher I could meet over the last few weeks,” she said. “I’ve also been talking with Jory.”

The school’s assistant principal, Katie Maya, and its reading coach, Molly Skudnig, both started their pre-school preparations early so they could also assist her transition, said Stewart. “These two women are vital, fabulous, dynamic women,” she added.

Stewart said the biggest challenge of taking over at a new school is, “Learning about what has occurred before my coming so that I’m familiar with the culture, the history. I want to hit the ground running, so it’s important to learn about what’s happened in the past.”

After attending high school in Virginia Beach, Stewart moved on to the University of Cincinnati, where she earned a bachelor’s degree in music education. After teaching in Columbus, OH, the Detroit, MI area and then Bowling Green, OH, Stewart and her four children moved to North Naples, where she still resides.

Southwest Florida is still home for two of her children, her daughter Kerri Hall, a paralegal, who lives in Naples and son Grant Schwalbe, a fireman in Estero. Another son, Phil Stewart, is an Air Force pilot stationed in London, while her oldest son, Rob Stewart, is a computer designer living in Ohio. Stewart has seven grandchildren.

Stewart said Westberry has been a friend since her days as the principal at Lely Elementary. “She’s a good friend, a good person,” Stewart added. “She’s as passionate as I am about children.”

Westberry praised Stewart, as her days as the Tommie Barfield principal were winding down.

“She’s very competent and a very kind person, and knowledgeable,” Westberry said in June. She’s been in the school district for a long time. She has a sense of fun, like I do, and I really believe the kids and staff will embrace her.”

Stewart said her experience at the school and in the community has been extremely positive, thus far.

“Every parent that I have met, every person I hear and talk to, is so positive about the school and the importance of it to the island,” she said. “I value and respect that so much. I’m so excited to be involved with the community of Marco Island. It’s a very special place. It’s a new and unique situation for me, this being the only elementary school on the island. I’ve always had a community of people involved in my schools, but this is an entire island. It’s a unique experience for me and it’s just very special.”