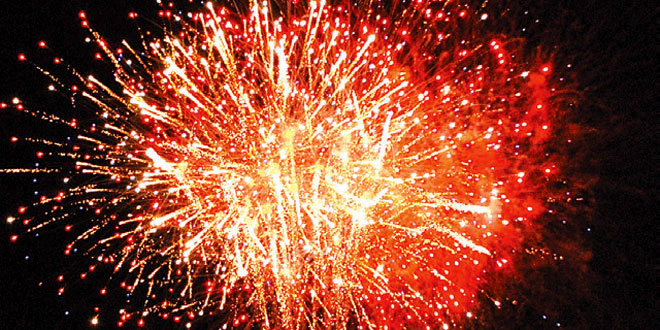 With summer knocking on the door, the Marco Island community is gearing up for the annual Fourth of July festivities at Residents’ Beach.

This year’s celebration is sure to go off in its usual big bang style thanks to the generous donations from community members, local businesses and the city of Marco Island. To date, $42,000 has been raised to pay for the fireworks extravaganza. In addition to $21,000 from the city, this year’s biggest donors include event host Marco Island Civic Association in the amount of $4,200 and Physicians Regional Healthcare System in the amount of $3,000. Joey Oliverio, owner of Joey’s Pizza and Pasta House, spearheaded the community fundraising efforts.

“This is a great example of our community all working together to make something happen,” says Ruth McCann, Executive Director of MICA.

The fireworks display is the grand finale of MICA’s Fourth of July on Residents’ Beach event, which begins at noon on July 4. The day includes food, music, games, arts, crafts and fun in the sun while celebrating our nation’s birthday. It culminates with a fireworks display on the water. Last year, roughly 5,000 people attended the event throughout the day.

More than 20 years ago, the Kiwanis Club of Marco Island began hosting the Fourth of July celebration at Residents’ Beach. These early events consisted of a community cook-out on the beach, complete with tents, grills, tables, chairs, live music and a fireworks display at dusk.

However, the popularity of the event — and its price tag — grew over time, and eventually, the Kiwanis Club could no longer fund it alone. Enter MICA, which picked up the event and its costs, incorporating a smaller, stadium version fireworks display. Later, the city stepped in to pay for the fireworks.

According to Bob Creighton, Purchasing and Contract Manager for the city, funding for the fireworks display has been a true community effort for the last two years. Budget issues led the city and community to agree to a 50-50 split of the costs of the display. “

“The city government has been under increasing budget constraints as a result of the declining property valuations,” Creighton explains. “(The city) operates, primarily on property tax, and when property values go down, the collected taxes go down. The City decided that it could no longer fund the whole show, and if the citizens wished to have a Fourth of July show, they were going to have to contribute.”

To be sure, the community and local businesses gladly have accepted the challenge to fund the fireworks, an event that helps spur Marco Island’s economy during the summer doldrums. “The fireworks bring in a lot of people, and our businesses reap the benefits,” says Sandi Riedemann, Executive Director of the Marco Island Chamber of Commerce.

This year’s 30-minute display promises to be as spectacular as ever. Zambelli Fireworks Manufacturing Co. will launch some 1,900 shells of sizes ranging from 2.5 inches to 8 inches and more than 5,000 Barrage devices from a Kelly Brothers Inc. barge and tug moored off-shore from Residents’ Beach. Support will be provided by the Marco Island Police Department, and the Marco Island Fire Department will inspect the fireworks setup, safety procedures and equipment.

The show starts at 9 PM.