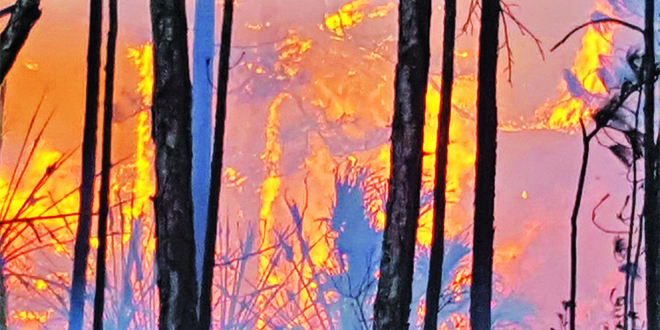 Current Fire Situation: The Cowbell Fire is approximately three miles north of I-75, 1.75 miles south of the Seminole Tribe of Florida and two miles west of the L-28 road. The fire perimeter has remained unchanged during the past four operational periods.

Planned Action: Structure protection is ongoing for all private properties with structures east of the fire perimeter in preparation for today’s change in weather conditions. Heavy fuel reduction continues along established containment lines. Crews continue to use low-impact suppression tactics to protect threatened and endangered species such as the Florida panther, Florida bonneted bat and red-cockaded woodpecker. Aviation resources are also maintaining containment lines and patrolling and monitoring hot spots.

Fire Weather: A Red Flag Warning was in effect at press time due to very low humidity and gusty northwest winds. Critical fire weather conditions will persist into the weekend with relatively cool temperatures.

Restrictions and closures: The following closures are effective as of press time, due to wildfire activity in portions of the Big Cypress National Preserve:

The following adjacent areas will remain open: Private lands in the designated area shall remain open; residents should use caution. These areas are closed to all recreational use, including off-road vehicles (ORVs), hiking, camping and commercial activities due to safety concerns related to wildfires in the area.

In addition, portions of the preserve, including Monument Lake and Burns Lake Campgrounds and some trails, remain closed due to the Parliament Fire. A temporary flight restriction remains in place over the Cowbell Fire.