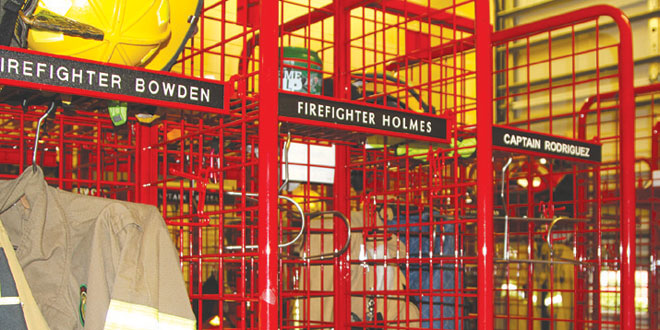 The pressure is on for the Fire Rescue Department

As the city’s Budget Sub-committee works through the fiscal year 2014 budget, MIFR Chief Michael Murphy and Deputy Chief Chris Byrne are working to convince city staff, officials and residents that Station 50 needs a major overhaul. The proposed project remains in the design stage, and the price tag is anyone’s best guess.

Still, support and approval of the project is uncertain. Last month, MIFR requested an annual budget increase from $4.7 million to $5.1 million as part of its budget negotiations. This budget does not include the costs of the proposed project. To date, only Councilor Amadeo Petricca has publicly supported rehabbing the fire house, while the rest of the City Council is waiting to see the Fire Station Remodel committee’s report.

What is crystal clear? Now more than 20 years old, Station 50 is outdated and in need of repair. In fact, the City Council agreed with this notion last year when it directed MIFR to develop a renovation plan for the fire house with an architect and engineering firm. Since then, a committee of Marco Island residents, city employees and county EMS personnel have worked to create a project that will pass fiscal muster.

Additionally, local and regional growth has the MIFR relying more and more on Collier County’s mutual aid agreement for emergency calls. Not only did the number of calls answered by the department grow from 2,481 in 2005 to 2,900 last year, but close to 600 of those calls required assistance from other fire districts in the area. As growth continues and local fire districts look to restructure — take Isles of Capri Fire-Rescue merging with the East Naples Fire Control and Rescue District — these pressures are only expected to increase.

“There has been a lot of growth in this city and in other departments in the city, and we are just looking to provide better service, needed service,” explains Chief Murphy. “We don’t want our residents to call 911 and not have somebody show up, and right now, we are stretched extremely thin. It is just smart, economic growth. Services demands are going up, and the need is there.”

Station 50 is home to the MIFR and its 38 employees. On any given day, the fire house operations staff totals 13, including administrative staff and EMS personnel working 48-hour shifts. “This is their home. They eat, sleep, do laundry 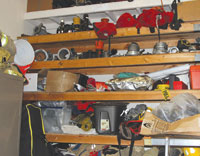 Limited storage off the garage. PHOTO BY VAL SIMON

here. They maintain the building themselves. There is no service. It is their house and the citizens’ house,” says Murphy.

This was not always the case. Built in 1992 by Marco Island Fire Control District, Station 50 has been a jack-of-all-trades for the City of Marco Island. It originally helped alleviate growing emergency call pressures from Marco’s original fire house, Station 51. When the city incorporated five years later, it actually housed the fire department and City Hall until the fledgling city could lease adequate space. Then the Marco Island Police Department was created, and it too set up shop in Station 50. Renovations were made to the building to accommodate everyone and every use.

When everyone moved out of the building, MIFR was left with some problems, according to Chief Murphy. In addition to general maintenance issues, the HVAC system was modified to accommodate uses that no longer applied. Walking around the facility now, there is little to no security. It is not handicap accessible, nor does it meet current building codes. The interior walls are hollow and have no insulation.

Worse yet, the general public walks into the building and right through into the employee living quarters, and even uses the restroom in the living quarters. Those who come into the fire house seeking medical assistance have to be helped in the public lobby area because there is a limited area of capability. With little storage, bay areas that are supposed to house vehicles have become work-out areas and a place to store bunker gear. The biggest problem: The fire house has one common bunk room with little privacy or gender separation for employees.

Further, although all other city services except the IT Department have moved out of Station 50, the city still holds training sessions and committee meeting here. When hurricanes come through, Station 50 is the center of the city’s emergency response activity. “It gets used by everybody,” notes Murphy. “During storms, it becomes the main kitchen for the city, so during hurricanes, everybody is here…This is where we stay, and this is where we operate in the storm. It needs to come up to current standards and codes.”

These physical inadequacies have become glaringly apparent in the face of growth on Marco Island and in the surrounding 951 corridor. Despite the recent bum real estate market, Marco Island’s population has grown one and two percent each year since 2010. Collier County’s Growth Management Division projects Marco Island’s 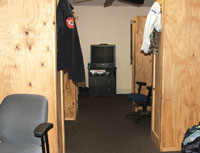 A cramped bunkroom sleeps up to six MIFR personnel.

permanent resident population will be 17,222 by the end of this year. That is nearly 800 more people than three years ago.

Deputy Chief Byrne reports that these additional households along with an ever-increasing number of visitors keep the MIFR pretty busy. “We don’t have as much call fluctuation between season and non-season as there used to be,” he explains. “This community has been experiencing a busier summer, a lot of vacationers. Very often, the month of June has call volume that is equal to some of our busier season months.”

Chief Murphy adds, “Go back to police data. They have clocked between 26,000-30,000 cars coming over the (Jolley) bridge every day. Those cars have people in them. Add it all up…That is significant.”

Even more significant are Collier County’s growth projections for the next 10 years: an additional 20,000 people in the 951 corridor. These projections show Marco Island with a permanent population of 20,130 by the year 2024. “Each new household unit will place an additional demand upon the infrastructure and services,” says Michael Bosi, the county’s community planning manager.

The county-wide mutual aid agreement is supposed to alleviate some of these growth pressures by offering resources to departments when they need them. Marco Island, however, is in a unique spot — literally — admits Chief Murphy. “We are at the end of the road not the middle of the road,” he reasons. “If we call anything from off-island, we are looking at nine minutes minimum for a response…You are talking about nine minutes into an incident where we are either on the scene or we are not. There is little that goes on that we are not impacted or are sending assistance over the bridge.”

Take the Summit House fire. Murphy and Byrne remember that additional units from around the county still were arriving on the scene 40 minutes after the original call was heard by emergency personnel.

“You also have to consider the fact of multiple incidences occurring at the same time,” adds Chief Murphy. “On one day, we had five incidents going on the medical side at one time, and most of those calls were cardiac, respiratory, stroke. They weren’t minor calls, so we are seeing more times when our resources are depleted and then our citizens have to wait for a fire resource or somebody else to come over the bridge.”

Knowing all of this was on the horizon, Chief Murphy and his staff went into planning mode 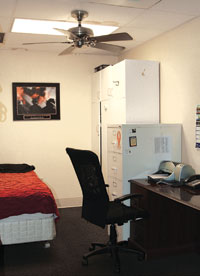 Note the leaks in the ceiling of the chief’s quarters.

a couple of years ago. “We looked out and said we are going to have to renovate this building in the future. We looked at the 2012-2013 time frame, and that would give us some time to plan for what was necessary. We’ve been trying to piecemeal and patchwork it together over the years knowing that there was a date when we would renovate for the next 20-30 years,” recalls Murphy. If approved, construction would begin in the Summer or Fall of 2014.

The main objective of the planning was to create a fiscally-responsible renovation project. To that end, the city and MIFR asked civilians to participate in the planning, placing three Marco Island residents on the committee as well as the Collier County EMS personnel. Chief Byrne is the lead on the project, and Councilor Petricca is involved as well.

“This group sits together, and the civilians are watching the money for the citizens and trying to get an understanding of what the firemen do,” Murphy explains. “They are trying to make sure that we do not invest money for the future badly.”

To be sure, speculation has run wild through the Marco Island grapevine about the project and its proposed cost, which is a bit frustrating for Murphy and Byrne. “People are throwing numbers around, and we have no validation for them,” notes Murphy. To date, the design is not complete.

As a result, city officials are reserving their opinions about the proposed project until the Fire Station Remodel committee releases its report, though there is tacit agreement that something needs to be done. “Not being on the Budget Sub-committee, I will only go so far as to say that if our community wants and expects the level of service that they’ve indicated, then keeping a balance between fiscal conservatism and delivering service is a must,” concedes Councilor Larry Sacher.

Whatever the final design and price tag, Murphy and Byrne hope the result will be a more public-friendly facility that also meets the needs of their personnel. They believe the release of the Budget Sub-committee report will help garner the community support needed to make the project a reality.

“When the public is informed of the needs and the fact that it will be a responsible plan, then they will support it,” insists Byrne. “I think they will look at the health and safety of the employees as very important. It just matters how well we get it to a final plan. I am pretty confident.”