Fire-Rescue Shoots Way to the Top 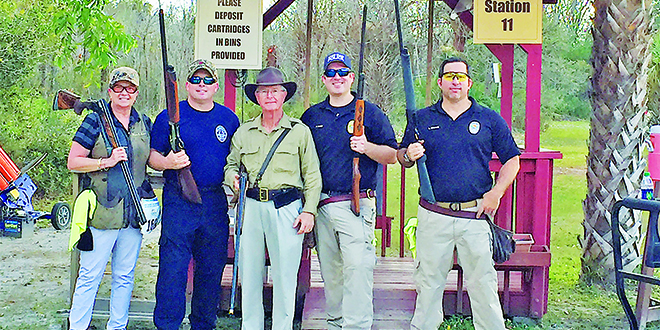 For now, Marco Island’s Fire-Rescue Department can claim bragging rights over their police department brethren where a certain shooting sport is concerned.

A team of firefighters and paramedics outscored a squad from the police department in a head-to-head sporting clays competition to win the inaugural Marco Island Public Safety Challenge. Held recently at Gulf Coast Clays in Port of the Islands, the event pitted four-to-five member teams from each department against each other to determine which was most proficient in hitting flying clay pigeon targets at multiple stations arrayed over a laid-out course.

“We wanted to do something nice for police and fire so we set it up,” Terry McCreanor, of Morgan Stanley Financial on Marco, who created the contest, along with his business partner, Brad Bersh. “Then it became a question of how do we fund the thing, so we contacted F-Troop. It was just a fun event that we put on for the police and fire departments to show gratitude for their services,” said.

The Challenge also included two teams of shooters not affiliated with the public safety departments. One was comprised of members of the overall event sponsor and co-organizer, a contingent known as the F-Troop.

“F Troop is a bunch of guys who get together and play golf at Island Country Club,” said member Michael Hook. “We named ourselves after the old (late 1960s) TV show.”

Hook said that when McCreanor, who’s also a member, approached them about supporting they event, the group was glad to step up.

“We shoot recreationally so we enjoy the sport of clay shooting and it gave us an opportunity to support our first responders,” added Hook, who was part of a squad that included 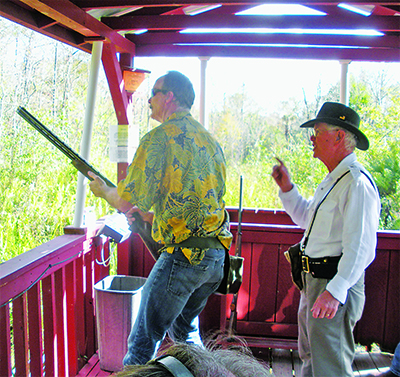 fellow “F-Troopers” Aldo Palombo, Ron Myers and Jack Green. “Not only do we play golf and shoot together, but we do a lot of charitable work on the island. It’s a bunch of guys who think the same way and not only want to enjoy the island, but we want to help those on Marco Island who are a little less fortunate.”

The results were determined by combining each team’s three best scores. The Fire-Rescue Department tallied 250 points, while the police squad finished with 233. The top overall finisher was a civilian team comprised of Wes Blackwell, Scott Kaufman, Tom Horton, Don Henderson that accumulated 255 points.

The Public Safety Challenge was a hit with the participants.

“I think it’s a great idea,” said Lt. Robert Mayberry of the fire-rescue department. “Everybody knows that police and firemen are competitive with each other. We enjoy it.”

For police Sgt. Hector Diaz, the competition marked his first time shooting clays. “I think this is a blast,” he said of the sport. “I think everybody should get involved. This is great for kids. It’s a great weekend for the family.”

“It’s camaraderie,” he said. “We get along great together. We see each other on calls and now we’re seeing each other not in the field and we’re getting to talk to each other and getting to know each other. It’s great.”

McCreanor said he anticipates the Public Safety Challenge becoming a yearly event that serves as a warm-up for the public safety department squads taking part in the annual Bill Rose Shootout fundraiser, which is set for Jan. 21 at Gulf Coast Clays.