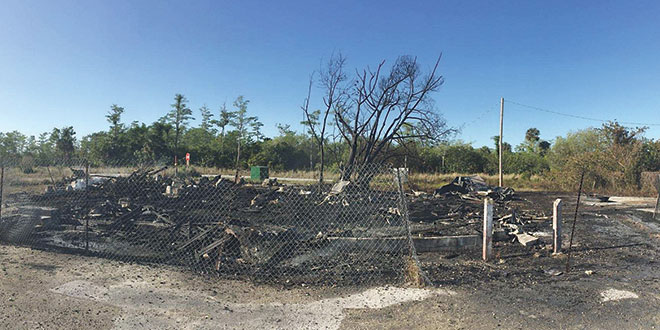 All that remains after the devastating fire that destroyed Monroe Station.

On April 9, 2016 at approximately 11:45 PM firefighters and law enforcement personnel from Collier County and Big Cypress National Preserve responded to a fire at the Monroe Station within the national preserve. The historic structure, located at the junction of Tamiami Trail and Loop Road, was consumed by fire and burnt to the ground. Ochopee Fire District Assistant Chief Caleb Morris stated that when he arrived on scene Monroe Station was completely engulfed in flames and sending up large embers into the sky.

The cause of the fire is currently undetermined and under investigation by both the Florida State Bureau of Fire and Arson and the National Park Service’s Investigative Services Branch. If you have any information related to this incident please contact the Florida State’s Arson Tip Line at 877-662-7766.

Monroe Station was one of six way stations constructed in the late 1920s in the remote reaches of Collier County along the Tamiami Trail. Monroe and the Royal Palm Station, located

Historic Monroe Station, as it was in the 1920s. Submitted Photos

at the intersection of CR 92 and Tamiami Trail are the only two that remained near their original locations, three of the stations have been destroyed over time and one was moved a great distance from its original site and modified for other use. The purpose of the way stations was to provide gas, and other conveniences to travelers. Over the years Monroe Station had been modified by several lessees and was a well known way point for people along the road.

For more information on the history of the Tamiami Trail and Monroe Station visit: www.nps.gov/bicy/learn/historyculture/tamiami-trail-and-monroe-station.htm