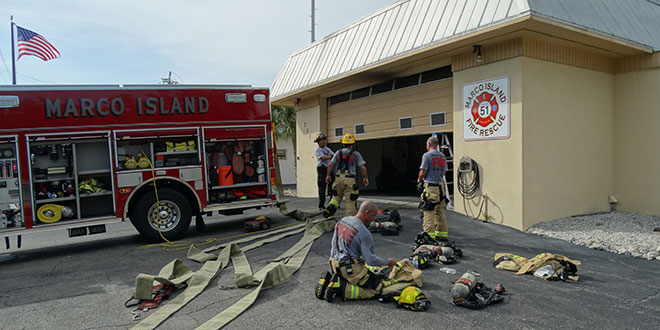 Rolling up on a working structure fire is not something unusual for an engine company and its personnel; it is a little different when the fire is at their station though.

That was the case on Friday afternoon at approximately 5:00pm when Engine Company 51 on Marco Island returned to their station on Elkcam Circle from a previous response and found smoke rolling out from the large bay door at the front of the station.

building, but there is moderate smoke involvement and the personnel and apparatus will be relocated to Station 50 for this evening until we evaluate the condition of the building,” said Operations Chief David Batiato.

The fire was centered in one of the two bedrooms within the aging structure that is planned to be replaced. That station serves to reduce response times to the center of the island and provides personnel for the fire/rescue marine unit stationed at Walker’s Marina.

to the hospital, leaving the engine company shorthanded,” said Acting Battalion Chief Chris Crossan, who was in command at the scene.

Acting Captain Al Munzo and Driver Engineer Brad Underwood were on Engine 51 when they rolled up on the building which had smoke showing. They would be backed up by Squad 50 and Engine 50, but it would be Munzo and Underwood that would make the initial attack on the fire. “Both Al and Brad did an outstanding job minimizing the damage,” said Crossan.

Fire inspectors from the department were on the scene to determine the actual origin and cause of the fire late Friday afternoon.