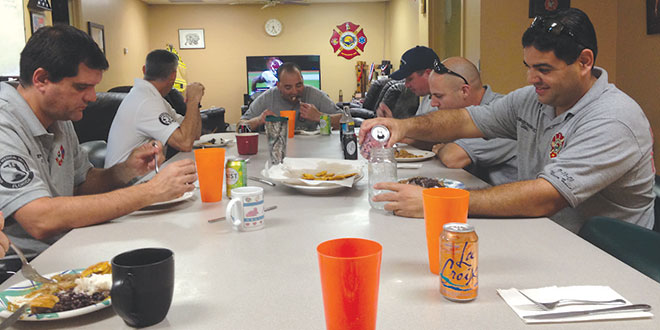 Eddie (on the right, pouring his drink) eats with the other firefighters.

On my recent visit to the Marco Island Fire Station I met with firefighter Eddie Cabal so that he could teach me a thing or two about firehouse cooking. Eddie graciously agreed to share with me his chicken mojo recipe, served with beans and rice and crispy, fried plantains.

Preparing dinner at the fire station can be somewhat chaotic. There are 12 mouths to feed, a constant coming and going of firefighters and staff and, of course, the threat of an incoming call that could disrupt cooking at any time. As we were about to begin preparing the meal, that’s exactly what happened. The alarm went off and Eddie had to take a call. Promising me it wouldn’t take long and that he’d be back soon, he rushed out the door. Luckily for me, and for the rest of the hungry firefighters waiting at the station, he wasn’t lying. Eddie was back in about 25 minutes, and we were ready to begin.

Eddie always starts with the rice and the beans, as they take the longest to cook. Allowing the beans to simmer really lets the flavors 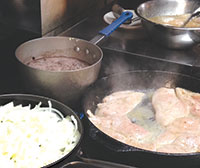 As the onions caramelize,Eddie cooks the chicken.

develop. As he was chopping the onions and the green pepper, he told me that he’s a home cook who learned mostly from watching his mother. When she makes this recipe, she uses dried black beans and cooks them all day long. While this definitely makes for tastier beans, it’s not the most practical method in a fire station. So Eddie sticks with beans from the can.

While the rice was cooking and the beans were simmering, Eddie began chopping more onions so he could begin the caramelization process. The trick is to let the onions simmer, untouched on medium-low heat until they start to turn a golden color. This takes time, so be patient. While Eddie continued to chop, firefighter Brad Underwood was recruited to peel and chop the plantains into quarter of an inch pieces. The plantains should be cut into the same size that you would for say, a banana for a bowl of yogurt. Bite size pieces, essentially. Also, wash the plantains before you peel them, so they won’t leave a black residue on your hands. Eddie neglected to tell Brad that little tidbit 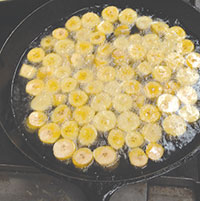 Fry the plantains until they turn golden brown.

of information until after he was done cutting them up.

“The prep work’s not that bad,” said Eddie, “It’s the cooking that’s the hard part. That’s when it starts to get a little crazy.”

So now everything was really coming together—the beans were simmering, the onions were caramelizing, and the rice was cooking. The kitchen was starting to smell really good. Firefighters kept popping their heads in to see when dinner would be ready. For the plantains Eddie added some oil to an iron skillet pan and let it get hot. Eddie prefers to do this with an iron skillet, as it adds more flavors, but a regular pan will do. While the oil was heating up he began trimming the chicken breast of fat and then butterfly cutting it. He added the pieces into a big bowl and covered them with Mojo marinade.

Eddie kept a remarkably clean kitchen, which I found pretty impressive. Whenever I cook or bake I always try to clean up as I go. Yet somehow, without fail, by the time I’m done the kitchen looks like a few WWE wrestlers had come in and

held a match there. There are dishes everywhere, sauce on the counter, cabinets hanging open. It’s bad.

Next Eddie added the chicken to the pan and let it boil in the mojo sauce. He does this until it’s almost all absorbed and the chicken is cooked through. While the chicken is cooking he added the plantains to the hot oil and let them fry until they turn golden brown. He then removed the pieces, let them cool for a few minutes, and then smashed them with the bottom of a mug to make a flat, round disk shape. He let me do this part. The plantains go back into the hot oil for about 1-2 minutes. The edges should be nice and crispy.

Finally, the chicken was done. He added the caramelized onions on top, gave it a good stir, and it was time to eat. Eddie announced that dinner was ready on the speaker and everyone filed in. They have this rule at the fire station that when it’s dinnertime, you sit down and eat like a family. They also have a rule that if you cooked, you 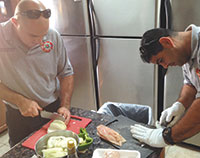 don’t clean. We finished the meal with a cup of Cuban coffee and some cookies.

For all the firefighters it was just another night, but for me it was a great learning experience. I would like to say “thank you” to the firefighters who let me into their kitchen. And of course, a special thank you to Eddie, who taught me how to cook a meal I won’t soon forget.

Ingredients For the rice:

Salt and pepper to taste

Cook the rice according to the package directions, adding 1 Tbsp. oil and 1 tsp. salt.

In a separate pot, add the two cans of black beans, along with the diced onion and green pepper, balsamic vinaigrette, mojo, and salt and pepper. If you like your beans more soupy, add a can of water. Cook on medium-low heat. 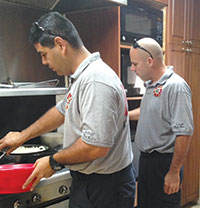 Eddie fries the plantains, while Brad keeps an eye on the chicken.

slices and add them to a pan with oil. Let them cook slowly, for approximately 45 minutes, until they caramelize.

Trim the chicken breasts of excess fat, then butterfly. Put the chicken into a bowl with the mojo marinade and let it marinate for 5-10 minutes.

Add the chicken to a pan and let it boil in the mojo marinade until it is fully cooked. Once most of the liquid has been absorbed, add a tiny bit of water to deglaze the pan and brown the chicken.

Once the onions have caramelized, add them to the cooked chicken, and stir.