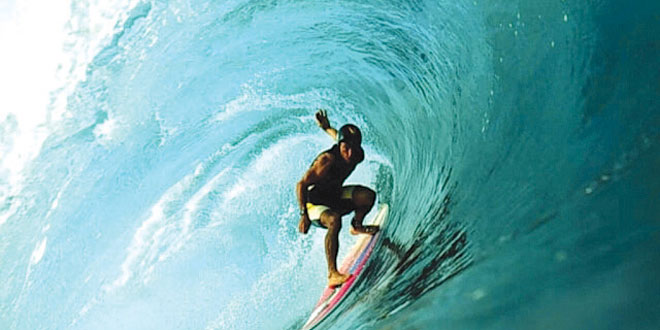 Each person has their own safe place – running, painting, swimming, fishing, weaving, gardening. The activity itself is less important than the act of drawing on your own resources.”

I recently came across this quote by Barbara Gordon, author and tv producer, and was touched by how eloquently these words echo the definition of an artful life… and I’m happy to picture you readers reacting the way I did, quickly scanning the list for your place – or adding to the list: dancing, golfing, building, cooking, rowing… go ahead, take a moment.

Notable is her reference to a “safe place;” indeed, the actual act of painting has been known to transport me above and beyond my physical surroundings. And I’ve often heard runners and swimmers describe getting to that place where their minds and motions are so precisely tuned they feel both one with the pavement/water and totally apart from everything at the same time.

A practicing surfer once taught me the phrase, surfing the Blue Room. While it directly refers to the moment when a surfer finds him/herself inside the curl, surrounded by light and water …and it’s just you and the board and the water and the sound and then it’s just you… it also applies to any time, any place, when you have that feeling. It’s a very handy phrase.

Each person, then, has the power to become a place. Rich stuff.

The other meaningful part of the quote is, of course, placing no judgement upon the activity that gets you there. I knew a woman who did beautiful cross-stitching; her colors were as sensitive as her subjects were lively, and her technique was flawless. Her creations became highly-coveted gifts. Unfortunately she stopped stitching after taking a round of teasing from her husband. Since his bride didn’t actually draw the images on to her cloth, and she ‘just’ repeated the same stitch, he declared her creations could not be called art.

Of course they can. He had no concept of the zen-like patience, calm, and focus it took to complete each piece. Patience is a highly-underrated art. He didn’t mean any harm, but they were still insensitive words. Likewise, she lacked the conviction of her right, and ability, to choose her own place. Such a shame, that’s too much power to give anyone else. (And she never finished the piece she was making for me!)

These little nano-nirvanas are some of the best trips we’ll ever take, and an artful life needs to take them, and take notice of them, at every opportunity.

Picture this: you’re being challenged by your job, kids, spouse, chores, whatever. You trudge out to the backyard because if you don’t spread the mulch before it rains it won’t get spread at all and it feels like just one more responsibility dumped on you. You’re mad, admit it. But, as you try to mutter your way miserably through the task, you somehow find yourself entranced by the tender little leaves prettily unfurling from that newly-planted bush. Your challenges are fading as the garden fills your focus… you are in your Blue Room, don’t miss it.