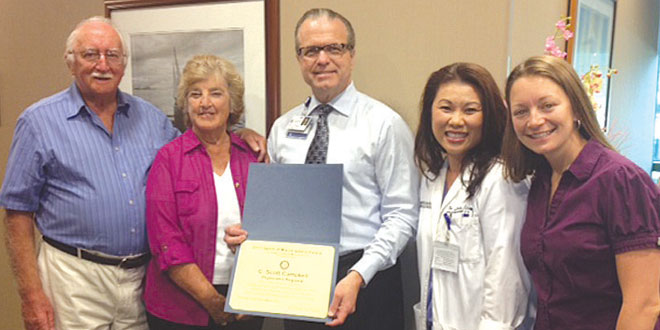 George Schroll was caught by surprise by the Spirit Award Committee at a recent Rotary Club Meeting. He was presented with his award in front of a large crowd of fellow Rotarians that also included his wife, Joan.

Schroll was honored for many years of service to numerous local organizations including the Noontime Rotary Club where he served as a past President and chairman of its College Scholarship Committee, responsible for awarding four-year scholarships to deserving local students.

In 2003 he was recognized as the Marco Island Citizen of the Year Award and is a past President of the YMCA Board of Directors. He currently serves on the Board of Trustees of the Marco Police Foundation.

C. Scott Campbell is involved on the island as a Board Member

George Schroll was presented with his award at a Rotary Club Meeting. submitted photos

of the Marco Island YMCA and also a member of the Noontime Rotary Club. Through his leadership, Physicians Regional has provided support to many local organizations and charities through their sponsorships and participation in numerous community events.

Scott and George, along with previously announced winners Barb and Lou Prigge, Keith Dameron of Iberia Bank and Rick Medwedeff of the Marco IslandMarriott Resort and Spa will be formally presented with their 2013 Spirit of Marco Island Awards at a Gala Dinner and Silent Auction to be held on Saturday April 27the at the Bistro Soleil Restaurant located in Old Marco.

The proceeds from the event and silent auction are used to support local charities and scholarships. For more information and tickets you may contact Al Diaz at 438-5285 or by email royalmarcoway@marcocable.com.