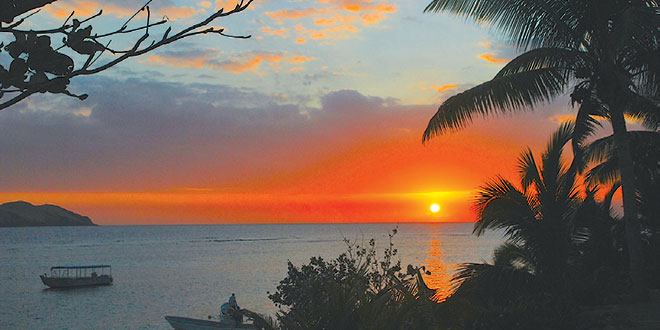 Yes, Marco is an island paradise but — SPOILER ALERT — it turns out that there are others too! Fiji with their “300 Islands of Sun” is a different sort of paradise. One with its own distinctive sights, culture and rituals.

My sister and I just returned from a seven-night cruise of the Yasawa and Mamanuca Islands with Captain Cook Cruises of Fiji. To our amazement, we have been converted from cruise scoffers to cruise zealots and have the fervor typical of new converts.

It’s a long journey to Fiji, but as we drew close, we looked out the windows and saw the stunning atolls in the dazzling water; the lengthy journey was immediately forgotten. We were ready to pull our bathing suits on in the plane and just jump out with our snorkel gear. Better sense prevailed, but barely.

Fijians are legendary for their hospitality. As we boarded the ship, seemingly the entire crew shook our hands, introduced themselves and asked our names. And then they remembered our names. How do they do that? We probably remembered one or two names (exaggerating here), and they seemed to absorb everyone’s.

Each day at 9:00 AM, most of the passengers would choose to go out on one of the two daily snorkeling trips. Fiji is renowned for being the soft coral capital of the world. We suited up and snorkeled every time.

Those who didn’t care to 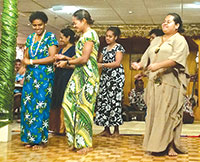 snorkel could see the reefs and fish via the glass bottom boat that went out on every excursion. Others went to the spa or simply sat on one of the sun decks and read or had a snooze.

We saw stunning corals, purple sea stars and what appeared to be a model program for fish diversity. Several times when we returned from snorkel trips, we went to hear George, the ship’s marine biologist, give talks about the interplay of the reefs, mangroves, fish and other players in the delicate ecosystem of Fiji.

George is a born storyteller and delighted in telling us how some fish are born male but later in life may turn female. Apparently, all clownfish are born male, and the largest of the group becomes a female. The previously second in command large, aggressive fish then mates with his former… Well, you get it. They probably don’t get much attendance at clownfish Weight Watchers. Thin just isn’t in.

Angel fish have their own take on the whole gender switcheroo thing. They live in groups of five with the blue one being the male. His job is to watch over the yellow female fish and keep them out of harm’s way, but then the day comes when the fish security guard goes to fish heaven. What’s a girl to do? Well, the biggest female starts to change color and gets all bossypants. Once she 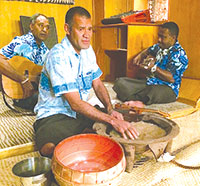 This process is called hermaphroditism, and occurs in more than 22 species of fish. And you thought being transgender was new? It’s old news to fish.

We had hoped to snorkel at the private island, Nanuya Levu’s Blue Lagoon, where the film of the same name starring Brooke Shields was filmed in 1980. However, the waters were too choppy that day.

Fortunately, we were able to later fulfill our movie location dreams by doing some of the best snorkeling of the trip near the island used for the Tom Hanks movie “Castaway.”

Every activity wasn’t aquatic; many were cultural and some pure entertainment.

A kava ceremony is an important cultural experience in Fiji as it’s revered for creating friendships and resolving community issues. The process is that you go to a village, and the men go inside a large hut and sit on the floor. The women have to sit outside and try not to feel resentful about that.

The eldest man in the visiting group presents a bundle of Yaqona, the kava root, to the village Chief. Various polite verbal exchanges occur, and then the kava is prepared. The roots are mashed into powder, and the chief mixes them in a large wooden bowl with lukewarm water. He does this by hand, continually wringing out a cloth to achieve the desired consistency. Kava is reputed 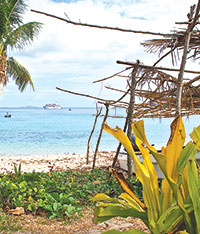 to have anesthetic and sedative properties.

It is also reputed to have a taste somewhere between mud and men’s dirty socks, so we took a pass on it. (Truthfully going to happy hour at CJ’s on Thursday evening is a much simpler ritual.)

Captain Cook Cruises also offers village tours and a chance to visit primary schools they help to support. We went to the Ratu Naivulu Primary School. At first, we had concerns that this might feel exploitative or that we would be asked for money, but those concerns were unfounded.

At Ratu Naivulu, there are 144 students ranging in age from 6-13 and eight teachers. All of the students, even the 6 year olds, board at the school during the week. Each student learns Fijian, English and Hindi (there is a large Indian population in Fiji), as well as traditional subjects. They also grow most of the food they eat.

Fiji has so many islands with small villages that it’s financially impossible to have schools in all of the villages. At this school, the kids arrive by boat on Sunday and depart on Friday.

Far from being a Dickensian scene, it was one of excitement and joy. The children were thrilled to have visitors and to perform some of their songs and dances for us.

After the performances, two 8-year-old girls basically claimed my sister and me and gave us a tour of the dormitories and guilelessly 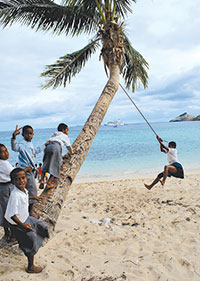 asked us nosey questions. My sister told them that at one time we too had been young girls who went to school. One of the girls replied, “Yeah, once upon a time on a hanky you did.” We weren’t sure but suspected that this comment conveyed a certain skepticism as to what they’d just been told.

Fijians seem to truly love to sing. You can’t arrive or depart from anywhere without traditional songs being sung and someone grabbing a guitar. This isn’t like some uncomfortable teenager having to sing “Happy Birthday to You” at a chain restaurant. This is something Fijians want to participate in!

An important form of entertainment in Fiji is a “meke,” which is a show combining singing and dancing. The men and women do their portions separately. The staff of Captain Cook had talented singers, dancers and faux-menacing warriors who put on an enjoyable “meke” for the guests.

Fiji, like Marco Island, has spectacular skies and sunsets. Looking at the palm trees on the volcanic islands in the early evenings as we cruised was a daily sensory delight.

The warm people of Fiji, the county’s natural beauty, ongoing practice of ancient traditions and respect for their environment make Fiji a fascinating destination.

You could say it’s an island paradise.

Kay Dougherty is a year-round Marco Island resident and travel writer. She also writes a humorous blog about travels with her sister, Anne Reilly. The blog can be found at blondebrunettetravel.com.