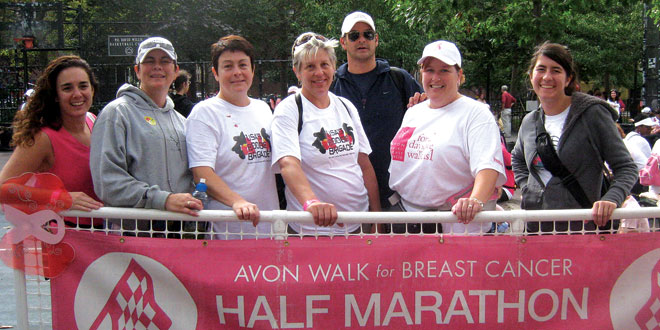 The Meurgue family of Marco Island is known for many things. The clan’s youngest daughter, Emmannuelle, is known for her excellent ability as a kicker in the male-dominated sport of football. Denis and Lisa, the patriarchs, are known for their two restaurants, Bistro Soleil and Petit Soleil. As head chef, Denis is well known for serving up fabulous French-inspired cuisine. Lisa is also known for the charity fashion show she began in 2008 to raise money for the Marco Island Unit for the American Cancer Society.

What some may not know about the Meurgue family is the struggles with cancer that Lisa’s side of the family has faced. “There are four brothers and sisters,” says Lisa. “That’s six members in our family, and three have been diagnosed with cancer.” Her father, Roger Mercado, was diagnosed with non-hodgkins lymphoma over 20 years ago and is a proud survivor, having been in remission ever since.

Lisa’s sister, Leila Mercado was diagnosed with ovarian cancer in 2001. “There is only 11 months between us, so we were always very close. They say that ovarian cancer is the “silent killer” because many women often don’t know until it’s too late. Leila’s fight started due to serious back pain she was experiencing. She went to the doctor, and he found a large tumor. It had unfortunately spread as

Lisa and Alexandra at the finish line for the Avon Walk for Breast Cancer; Lisa’s second walk with her second-born daughter.

“She had surgery and chemo, and they aggressively fought (the cancer).” Five years later, Leila, still struggling with the disease, came down to Marco for a visit. “She didn’t feel well and we took her to the doctor.” According to medical staff, she was too sick to leave, but Leila wanted to go back to Wisconsin to see her own doctor. Air-ambulanced back home, Leila left on a Friday, celebrated her 43rd birthday two days later and passed away the next day.

“It was very devastating,” says Lisa. “Especially for our girls. She was the fun aunt. She adored them and they adored her.”

In 2008, Lisa discovered that she had breast cancer and after the loss of her sister, she didn’t quite know how to tell her three daughters, Margaux, Alexandra and Emmannuelle. “I told my parents on a Friday and my two oldest on a Friday. Margaux was 16 and Alexandra was 14. “The girls were very scared because they remembered what happened to their aunt, but they had good friends and our very supportive family to help them. Our youngest, Emmannuelle, was only 10, so it was much harder for her to understand at the time.” Lisa contacted Cindy McCue, then Executive Director of the Marco Unit of the American Cancer Society for help. “I

Three generations of Lisa’s family; through thick and thin, the family has supported every member that has battled cancer.

asked her if she had any books that could help me explain it better, and she had one for me to use.”

Telling her parents was even harder, she says. “They were the first people I told, but it was very difficult because they had already lost one daughter to cancer. It was one of the hardest things I have ever had to do.”

The family rallied behind Lisa to help her as she began her fight. “My parents live here, and they were a huge help. My brother is a surgeon and made me an appointment at Moffitt (Cancer Center) in Tampa.”

Lisa began chemotherapy sessions, four sessions in total. After the first one says she could already feel the lump getting smaller. The following April, Lisa opted for a double mastectomy and later, reconstructive surgery.

“Ironically, I was in Wisconsin at my sister’s cabin. I was lying in bed and I felt something. I got home and went to the doctor and he said it was nothing and to come back in three months.” Three months later, Lisa went back and was told she needed a biopsy. “It was then that they told me I had cancer.”

“I had just had a mammogram in May and the exam was fine. I’ve always been religious about getting my mammogram every year not just because of my sister, but 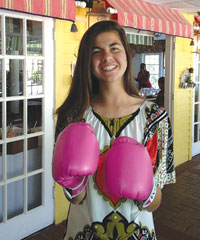 because it’s just something that you do.”

Through the whole process, Lisa’s family and friends were by her side. “The day of my first chemo session was actually the opening day of Bistro Soleil,” she recalls. “But we were so blessed. People made meals for us; my friends even brought me to Moffitt for chemo treatments.”

In 2010, after a few health issues, Lisa decided to go ahead and have a hysterectomy as well. “At my age I’m not having any more children, and I just wanted to be proactive. We think we’re invincible but we’re not. It doesn’t mean I won’t get (cancer) again, but it’s much less likely.”

Now a breast cancer survivor, Lisa knows how a diagnosis can affect a whole family. Having seen her dad’s fight, her sister lose her fight and her family help her fight, she is a vigilant supporter of the American Cancer Society and the Avon Walk for Breast Cancer.

In 2009, her daughter Margaux took an internship with the Avon Walk, and in October, Lisa and Margaux went to New York for the walk and crossed the finish line together. They walked 26.2 miles, spreading awareness and raising money for a cure. When Alexandra was a senior in high school, she and Lisa did the walk together as well. “Emmannuelle and I will do it together when she’s a

Lisa and her oldest daughter, Margaux, at the finish line. The youngest of the Meurgue girls, Emmannuelle, will walk with her mother her senior year, just as her older sisters have done.

But the Meurgues have been involved with raising awareness long before either Lisa or her sister were diagnosed. “In 2000, when we owned Island Cafe, we held the first meeting for the first Relay for Life on Marco. “We’ve always been involved in Relay.” Over the years Lisa has headed up at least six teams, including a team the year after she was diagnosed. “The kids always did relay. Emmannuelle wants a team this year, so we’ll do it again,” she says.

Lisa’s annual fashion show, which was the brainchild of her close friend, Joyce McFarland, owner of Marco Island Clothing Company, is also all about supporting ACS. All proceeds go to the Marco Unit. Often emceed by Fox 4 News anchor, Patrick Nolan, the event takes place at Bistro Soleil and includes models sporting the latest fashions from Joyce’s clothing store. The annual fashion show is usually held in March.

“I was lucky to have caught the cancer early, so I was relatively positive about it, but there are no guarantees,” says Lisa. She has taught her girls the importance of annual exams and is willing to share her story to encourage others to be proactive as well. In a world of uncertainties, one thing is certain for the Meurgue family: they won’t give up the fight when it comes to cancer, whether it’s for their family, friends or strangers.