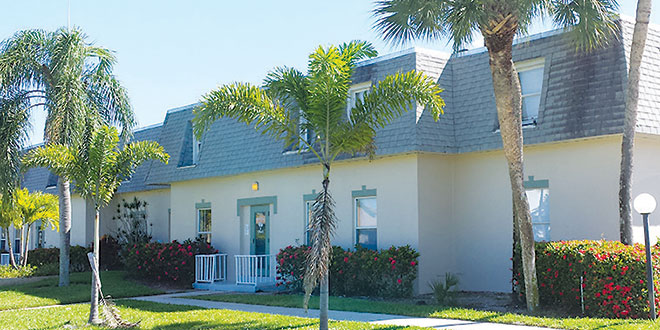 One of Marco Island’s early condominiums, Wexford Place, built in 1965.

Marco Island’s condo construction started fifty years ago when Wexford Place opened at the corner of Bald Eagle and Tallwood. This was a time of space exploration, jet planes and the Beatles. Condos built back then were about 700 square feet, and featured one or two bedrooms with one bathroom. Condo interiors tended to be minimalist, true Mid-Century Modern with simple lines. Drab earthy tones and campy colors like avocado green, harvest gold and bronze tones dominated cabinets, refrigerators and shag carpet. All of these condos have been updated, and today 17 of them are on the market at an average list price of $230,000.

During the 1970’s, Marco Island’s condos grew in size to 950 square feet, with more two bedroom, two bathroom models. The peace and love movement came into its own with a psychedelic excess of drugs, sex, flower power and rock-and-roll. An explosion of bright colors, orange and yellow being favorites, appeared. Wall-to-wall carpet was the new choice, suitable for TV trays. No-wax vinyl floors replaced linoleum. Pop art, geometric shapes, paisley and tie dye fabrics could be seen everywhere. Sixty of these 1970’s condos, again all updated, are on the market this week, with an average list price of $350,000.

Two bedroom, two bathroom condos were the choice of developers in the 1980’s, but by then, a typical new condo had grown to 1,200 square feet. Boom times and excess ruled the day, until the recession hit. Condos came with new laminate countertops, mirrored tables and closet doors, track lighting, Hollywood lighting, butcher block, hanging copper pots, carpeted baths, lots of pine furniture, dainty florals, lots of ruffles and painted metal beds. Toilets, sinks and vanities came in deep colors, like hunter green, navy, black, mauve and terracotta. Painted tiles were popular for back splashes, walls and counters. Corian made its debut for

baths and kitchens. Lazy Boy recliners, rattan furniture and lighted beer signs were everywhere. The muted and relaxed colors of dusty pastels could be seen on walls, upholstery and draperies. The color mauve was everywhere, and so were wallpaper borders. Today you may find some of these lingering features among the 104 condos built in the 1980’s that are on the market this week, at an average price of $508,000.

Marco’s 1990’s condos jumped to 2,000 square feet, with many more three bedroom and two or three bathroom layouts. The 1990’s was an environmental era with a new awareness of living green and measuring carbon footprints. Designs returned to minimalism in the early part of the decade. Beige and white colors ruled the day. Floor tiles grew in size and came in different shapes. All-white kitchens were in demand. Granite, concrete and glass countertops were new and exciting. During the latter part of the decade there was an explosion of floral and damask wallpapers and fabrics. Faux painting was a must on walls, ceilings and furniture. Fifty-nine of these condos are for sale this week, with an average list price of $925,000.

Condos built in the 2000’s featured primarily 3 bedrooms or more with 3 bathrooms and a powder room, and 2,800 square feet on average. The 2000’s decade brought technology and continued affluence to condo design until the recession. The latest condo built on Marco Island is Mariner Palm Harbor, built in 2008. Condos built during this period have dedicated areas for home computers, TV’s in many rooms and docking stations for phones and popular electronic devices. Laundry machines, refrigerators, stoves, dishwashers and microwave ovens have become more efficient and state-of-the-art. Floor tiles became much larger, and engineered wood floors covered with area rugs became popular. Fifty-nine of these condos are listed for sale this week, at an average list price of $1,700,000.