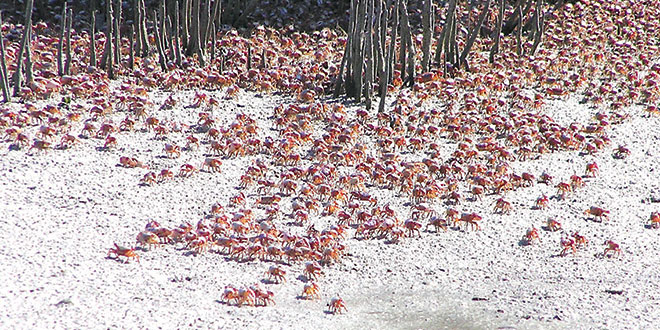 It’s a warm, sunny day. You decide to visit Tigertail Beach, and when you get there, it’s low tide. You look to the north, toward Hideaway Beach, and you see what appears to be a red carpet covering the sands. A special sort of carpet, as it’s constantly in motion. As you get closer, the carpet suddenly disappears, and you realize that the illusion of a carpet was created by the massing of hundreds of fiddler crabs which have scurried into their burrows as you approached. If you remain very still, the crabs will eventually emerge from their burrows and resume their normal activities—looking for food and looking for love.

The crabs with the large claws are the males of the species. The purpose of the large claw is mainly to attract a female. If a female shows interest, the male will enter his burrow and drum against the side of it with his claw; if the female enters, they will mate and then the male will seal the burrow with a plug of sand. The female will clutch the fertilized eggs to her abdomen for about two weeks until the next spring tide opens the burrow, at which time the female will deposit the eggs into the water of the lagoon. (A spring tide occurs at a new moon and a full moon, when the sun, moon, and earth are aligned, causing an extra-high high tide and an extra-low low tide due to increased gravitational pull.) Some of the eggs will wind up as a snack for one of the many forms of life in the lagoon, but some will survive. The female is now ready to mate again. Mating occurs during the warm summer months.

If a male should happen to lose his large claw, perhaps as a result of a conflict with another male, the remaining small claw will become a large claw, and the lost claw will grow back, but will then be the small claw. The same is true for stone crabs, which is why commercial crabbers only take one claw, and then return the animals to the water to grow new ones.

Take a look at an individual fiddler’s burrow the next time you’re at Tigertail. You’ll see two types of sand pellets near the entrance: larger dark pellets and much smaller white pellets. The dark pellets are the sand the crab has excavated to make the burrow, and the white pellets are the sand the crab has sifted through in its mouth, removed all the nutrients, and spit out. Since the nutrients (the dark matter) have been removed, the sand is white again.

Life isn’t all sun and fun for these little creatures: they’re a favorite food item for the Wilson’s plover, one of our year-round residents, whose sturdy blunt bill can break the crab’s shell in order to get at the meat inside. Another peril is the ibis, whose long curved bill is well suited to probing in burrows for a tasty morsel. Unlike the Wilson’s plover, the ibis doesn’t break the shell—it swallows the crab whole.

Fiddler crabs are just one of the many interesting species of plant and animal life to be found at Tigertail. If you’re interested in learning more, tours are Monday through Friday at 8:30 a.m. continuing until April 1, 2016. No reservations are required. Bring binoculars and wear water shoes.