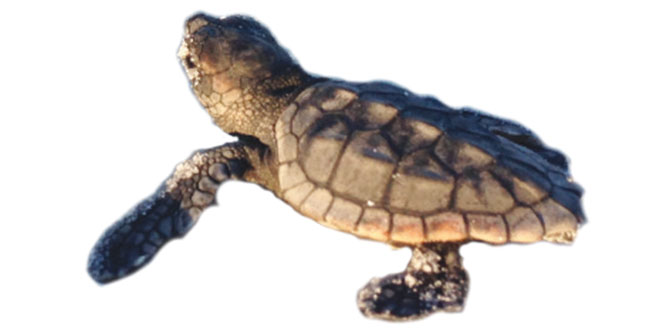 This is a busy time of year for Marco’s longtime “Turtle Lady,” Mary Kelly Nelson, as she monitors and protects this year’s loggerhead sea turtle nesting season on the island’s beaches.

Nelson, an environmental specialist for Collier County Sea Turtle Protection, said 2016 represents a departure from what has been an upward trend in the number of nests found annually on Marco.

“For Collier County and throughout Florida, the numbers are up, but Marco’s beaches are down from what we had last year,” she said. “We did get 77 nests this year, which is good, but not compared to what the other beaches in the county are getting this year.”

The Island’s 118 nests in 2015 continued the increases experienced since 2010, an upswing that reversed what had been a downward trend over the previous 10 years.
Nelson said year-to-year results can vary for a variety of reasons, but Marco’s totals are usually in the 70-to-90-nest range. “The 118 was a good number for us and we were looking forward to it in- creasing this year, but that didn’t happen,” she added.

Female loggerheads nest every three- to-four years, always returning to the exact place where they were born to build nests and lay their eggs. Nelson said Marco’s beaches are one of few Collier nesting sites where the numbers are down.

She couldn’t pinpoint the exact cause of the decline, but she attributes it, in part, to a beach renourishment program at nearby Sand Dollar Island. The pumps used to ex- tract sand from the waterway’s floor may have discouraged the turtles from laying their eggs, explained Nelson.

Disorientation caused by light pollution has also been an issue this year at Marco’s nesting sites. There have been four loggerheads,

this season, which have instinctively   wandered   down   the   beach toward nearby lights, rather than to their nests, said Nelson said when interviewed recently.

In a natural setting, the loggerheads would be nesting on a beach lit only by the moon and stars.

Light pollution is also known to cause disorientation in hatchlings, causing them to crawl toward the light source instead of the Gulf of Mexico, decreasing their likelihood of survival.

Nelson said Marco’s crescent-shaped beaches can give people the false impression that if there isn’t a loggerhead nest near their home or hotel room, “that they don’t need to worry about it, but that’s not the case.”

People walking on the beach with flashlights at night can also discourage loggerheads from laying   their   eggs, something that has especially been a problem on South Beach, she added.

“This year, we had a record 190 false crawls, where the mother came ashore, but didn’t lay eggs,” Nelson said.

During May 1 to Oct. 31 loggerhead nesting season, Florida and county regulations for beachfront buildings call for: