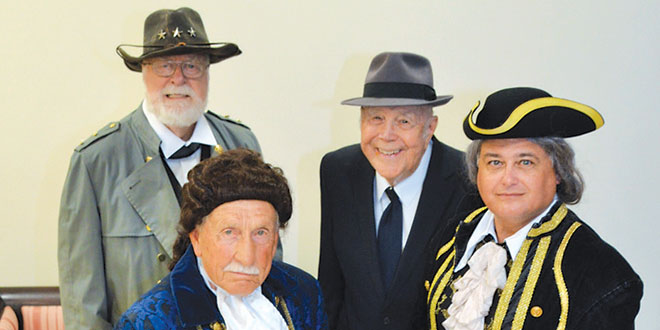 This month, the Marco Island Historical Society is bringing to Rose Auditorium first-class entertainment that islanders will not want to miss.

Tickets are $20 (cash or check only) per person, with general seating at both performances. To purchase tickets, visit the gift shop at the Historical Museum or at Kay’s on the Beach (1089 Bald Eagle Drive). The gift shop is open from 9 AM-4 PM, Tuesday through Saturday, and is located at 180 S. Heathwood Drive.

Florian’s mother was once told to take away his guitar until he improved his grades in math. Luckily, she ignored that advice and Florian went on to sing lead with the famous musical group, The New Christy Minstrels, for many years. Florian’s new show focuses on the songs

William Florian will perform at Rose Auditorium on February 12.

of the 60s and includes much of the music he performed while with the Minstrels; selections from the Mammas and the Pappas, John Denver, Pete Seeger and others, interspersed with delightful stories and snippets of musical history. (Ticket information, below.)

MacPherson is a versatile, Las Vegas-style entertainer with a comedic repertoire of more than 60 world-class impressions that are sure to appeal to any age group. His show is hilarious and brilliantly paced from start to finish. He has performed his show throughout North America, including Las Vegas where he has been a star attraction at Harrah’s Hotel & Casino, the Tropicana and the MGM Grand. This is one time when what happens in Vegas should not stay in Vegas.

Ticket Information for William Florian (Feb. 12) and Houston MacPherson (Feb. 20): Tickets are $30 per person with general seating. To purchase tickets by phone, call Brown Paper Tickets at 1-800-838-3006 (phone lines are open 24/7) or buy tickets in person at the Marco Island Historical Museum from 9 AM until noon, Tuesday through Friday. Tickets will be available at the Museum two weeks before the scheduled performance and if still available, will be sold at the door. Proceeds from these events, after expenses, will go to benefit the Catapult Campaign, a fund established to help bring the Marco Cat and other treasured artifacts back to the Museum.