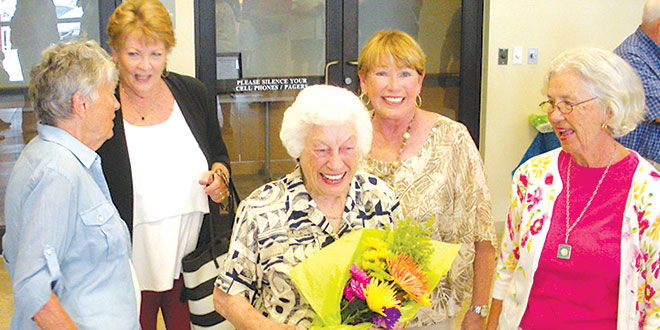 Fay Biles and her late husband Bedford were enthralled the first time they laid eyes on Marco Island.

It was 1967 and the couple had traveled to the island from their northeastern Ohio home to check out what a salesman for the Mackle Brothers had touted to Bedford Biles as a beautiful new island that was just starting to be developed.

“We had already said that when we retired, we were going to move to Florida,” Fay Biles recalled recently. “He (Bedford Biles) was from North Carolina and he hated the cold weather. He said, ‘They offered me a good price on one of the first condos.’ We came down and fell in love with Marco Island, right off the bat. We knew from the first day that we were going to retire here.”

So the Biles purchased a condominium vacation home and later built a house along Heights Court, which became their full-time residence in 1989, after they retired, he from practicing law and she, as a vice president at Kent State University, the first women to hold that post at the institution.

But in 1976, the year of Marco’s cityhood, Fay Biles acted to ensure there was a watchdog overseeing the municipal government, and pushed for low taxes by creating the Marco Island Taxpayers Association (MITA).

MITA was a potent force as an advocate for the citizenry on myriad issues, especially those of a fiscal nature. Fay Biles was the organization’s president from its start until its dissolution in 2014, and as constant a presence at Marco City Council meetings as the councilors themselves.

Bedford Biles was a WWII veteran who, as a member of the 101st Airborne, was part of the D-Day invasion of Normandy and the Battle of the Bulge, receiving three Purple Hearts for combat wounds. He left Duke 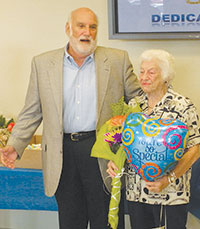 University, where he played football, to enlist. Bedford Biles completed his bachelors’ degree after the war and then earned a law degree at the University of Akron. He passed away in 2013, at age 92.

The couple’s service to both Marco and the country was saluted in a lasting fashion recently when the city’s community room, home to city council meetings, was named in their honor. Held one-half hour before the June 1 meeting, the dedication ceremony was attended by council members, city officials and community members.

“I am delighted to have the opportunity to the rename the Marco Island City Council meeting room the “Dr. Fay and Bedford Biles Community Room,” said council chairman Larry Sacher in formally christening the room in the their honor.

Fay Biles was moved to tears, but retained a smile as she addressed the crowd.

“Bedford would be so proud,” she said. “Our heart and soul has always been with Marco Island. It’s just the best place in the world.”

For her, the dedication and ceremony were completely unexpected.

“It has been a complete surprise,” said Fay Biles. “I had no idea at all. My nephews said we were going to a city council meeting and that we’re going to go a little bit early. I said, ‘Wonderful,’ and I walked into this. How nice. I can’t believe it, and how wonderful for them to do that.”

As she spoke, behind her, the lettering designating the room’s new name stood proudly above the entrance. Fay Biles glanced over her shoulder and said, “See Bedford’s name up there? Well that’s just been a wonderful, wonderful surprise. Oh, he would be so thrilled.”

Linda Spell was among the friends who came out to celebrate the Biles. Spell was joined by four other women, who like Fay Biles, are all members of the Tri Delta

“She never missed a council meeting the whole time that she was the head of the Taxpayers Association,” said Spell, who is a long-time Marco resident. “She went to every single meeting and usually had something to say to keep the city on the straight and narrow.”

Fay Biles had been out of town until shortly before the dedication, which she attended with two nephews, Edward Reigner, of North Carolina, and Thomas Reigner, of Pennsylvania. They have been assisting their aunt in sorting through several decades’ worth of records, memorabilia and more as she prepares to put the three-story home on the market.

She taught health and physical education at Kent, having received doctoral degrees in those concentrations from Ohio State University. The Philadelphia-area native was an instructor and administrator at Kent State where, in 1970, she witnessed the Ohio National Guard shooting of campus protestors that shook the nation.

Aside from her involvement in Marco Island municipal affairs, Fay Biles was also active in Collier Council matters, serving on the Emergency Medical Services Advisory Council and the county’s Water and Wastewater Authority.

Fay Biles also served on the advisory boards for the Community Foundation of Collier County and the Cleveland Clinic, and she was a charter member of the American Association of University Women Marco Island Branch.

At present, she is wrestling with some hard decisions regarding where she will reside once her home is sold.

“I’m just not sure yet what I’m going to do,” she said. “If I stay here, I may get an apartment. Or I may have to go live with relatives, because they insist I cannot live alone. I love Marco and I cannot bear the idea of leaving it.”