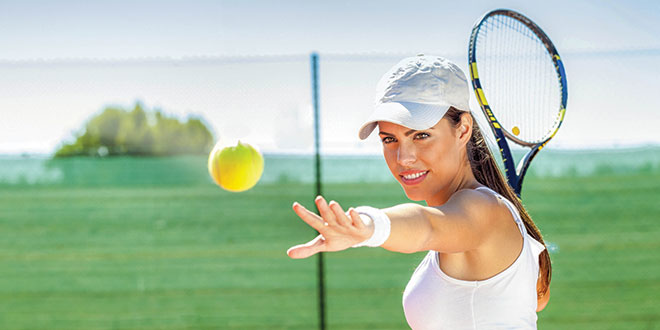 As the father of two daughters, I never seemed to have any success getting my girls to watch sports, like football, on television with me. I just had to accept the fact that they were not boys, and they did not like to watch football, and I had to learn to live with that!

I always encouraged my girls to participate in as many activities as possible and they both enjoyed playing a variety of different sports. Obviously, with their father being a tennis instructor, they were exposed to the sport of tennis, and the one sport they have always agreed to watch with me is tennis!

At any rate, in retrospect, I discovered that one of the reasons both of my daughters participated in and enjoyed the sport of tennis, was derived from the fact that tennis is very fashion oriented.

Most sports are team sports and the players all wear team uniforms. Team uniforms are also usually designed more for function than for fashion. However, tennis is a sport where each individual player is sponsored and is playing in clothing that they are being endorsed to wear. And from their exposure to the viewing public, the outfits they are wearing are being promoted for sale to the consumer by the manufacturer.

Yes, there is a large and profitable market for team sports apparel. If my favorite team is playing in, or better yet, wins the Super Bowl, the sale of team caps and jerseys skyrockets! However, those sales soon disappear.

But when a top ranked player appears on the court at a major tournament in new tennis apparel, every player at the local club wants to wear that outfit for their next match! Tennis is such a fashion-oriented sport that the ball boys, umpires and line judges wear Ralph Lauren outfits at Wimbledon and the U.S. Open.

While players competing at Wimbledon are still required to wear traditional all-white tennis apparel, fashions in tennis have dramatically changed over the years. Today’s professional players mostly wear non-collar, and even sleeveless, shirts. The fabrics are no longer made of cotton and the colors now range from all black outfits to neon yellows or greens with matching color coordinated shoes and socks. Some players even have color coordinated matching tennis bags!

And now for a bit of tennis fashion history.

The polo style, short sleeve, soft collared shirt was invented by the French tennis player Renee Lacoste, way back in the 1920s. Lacoste was one of the Four Musketeers with Jean Borotra, Jacques Brugnon, and Henri Cochet, French tennis stars who dominated the game in the late 1920s and early 1930s. He won seven Grand Slam singles titles at the French, American, and British championships. These shirts are commonly referred to as alligator shirts, but the logo is actually a crocodile, which was Lacoste’s nickname.

His shirt design has been the standard of men’s tennis for decades. The fabric was 100% soft cotton, and for tennis, they were traditionally all white in color. The modern day Lacoste polo style tennis shirt has been marketed in many fashionable colors and has been a popular casual wear fashion statement for both men and women for generations.

Ted Tinling, with his design of the tennis mini skirt back in the 1960s, changed the traditional old school look of tennis fashions for both women and men. Tinling designed dresses for almost all of the great female players throughout the 1950s, 1960s and 1970s.

Today’s tennis fashions can be worn on the courts, as well as out to lunch with friends. In our year round warm climate, tennis clothing can be worn daily, as a comfortable and good-looking choice to wear just to go out and run errands in. I am even seeing tennis outfits being worn by pickleball players, a logical choice because of the similarities of the two sports.

So whether you are playing tennis, pickleball, or just going out to run some errands and grab a bite of lunch, make an effort to dress for the occasion and look your best.

Wayne Clark is a certified professional tennis instructor with over 25 years experience coaching players on all levels of the game. Wayne is also qualified in pickleball instruction. He has been the head instructor at The Marco Island Racquet Center since 2001. The Racquet Center offers clinics, private and group lessons for both tennis and pickleball. Coach Wayne’s Island Kids Tennis juniors program runs year round and has classes for players from kindergarten through high school. Contact Coach Wayne by email at WClark@cityofmarcoisland.com, by phone or text at 239-450-6161, or visit his website at marco-island-tennis.com