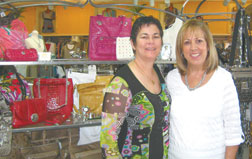 Lisa and Joyce have been good friends for years. Both private business owners on Marco Island, they had an immediate connection. Lisa has been a long-time supporter of Relay for Life, a nation-wide program held by the American Cancer Society to raise money for cancer-related research and funding. Her inspiration came from losing a sister to the disease as well as from watching her father battle and beat it.

The Marco Island chapter of Relay for Life, now in its ninth year, is something Lisa has been a part of since the beginning. Joyce has taken part in the event as well as a member of Lisa’s team. All the money raised by teams during the Relay for Life goes to their area’s chapter of the ACS. Lisa and Joyce have been raising money for the Marco branch of the ACS for quite some time now.

In 2008, Linda was diagnosed with breast cancer. She is now a cancer survivor. About a year after her diagnosis, Joyce approached her with the idea of a fashion show to raise money for Marco’s ACS chapter. The first year was a complete success and each year to follow has proved to be the same.

This year should obviously be no different. The show is held at Bistro Soleil, located at 100 Palm Street, at the Old Marco Inn. The models for the show are a mix of cancer survivors as well as supporters of the cause. Lisa’s husband, Denis Meurgue, Chef of Bistro Soleil will be preparing a gourmet lunch for all to enjoy at the event.

As guests arrive, they will be treated with champagne, homemade smoke salmon, baked brie and bruschetta for hors d’ouevres. Sabrina Williams, a local female vocalist, will be performing as guests and models mingle at the onset. Models will

be featuring casual, resort attire as they mix with guests early on.

The show will continue with models strutting the runway in daytime attire for the modern Marco Islander. All clothing and accessories are provided by Joyce through her store, Marco Island Clothing Company, located at the Shops of Marco. Each guest will be given a discount coupon for Joyce’s store that they can take in to get a great deal on their favorite item from the runway.

Lunch will then be served, with an entree consisting of spinach and parmesan quiche partnered with a mixed field of greens served with Bistro Soleil’s house black peppercorn and garlic vinaigrette. A refreshing, light lemon mousse will be served for dessert.

Following dessert, the final runway walk will begin. Models will feature the perfect evening cocktail attire for a night out on Marco Island.

The entire event will be emceed by Fox 4 News’ own, Patrick Nolan. “He has been our emcee every year, volunteering his time for the event,” Lisa explains, “and he is very funny!”

The Calusa Garden Club will also be in attendance, raffling off handmade floral arrangements throughout the afternoon.

In order to attend the event, one may purchase a ticket at the Marco Island Unit of the American Cancer Society, located at 583 Tallwood Street. One may also purchase tickets by phone at 239-642-8800. Tickets cost $50 per person and include the luncheon as well as a complimentary glass of champagne.

“As the diagnoses of cancer patients increases, so does the need for funding,” adds Melissa Felice, Greater Marco Island Unit Executive Director of ACS. Every bit of money raised towards the American Cancer Society is anything but wasted.

As a survivor, Lisa understands this better than most. “Joyce and I continue to raise money for the American Cancer Society so that women and men can get the medical care they need regardless of their ability to pay, and so leading research teams can receive the vital support in their ongoing search for a cure. Cancer touches all our lives. My hope is that my daughters never have to hear the words that I heard: ‘You have cancer.’

With the constant efforts of women like Joyce, Lisa and Melissa, Lisa’s dream for her children’s health may very well be possible.