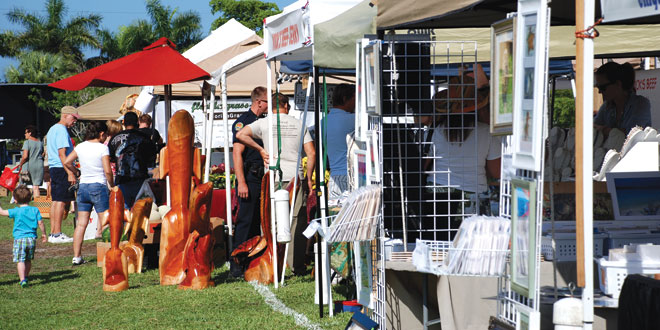 The recreation manager for the City of Marco Island’s Parks and Recreation Department has been up with the sun every Tuesday and Wednesday since November helping to transform Veterans Memorial Park into the weekly Farmer’s Market and then back into a park again.

Then there are the countless other events she and the five other members of the Parks and Recreation staff focused on in the last six months — the Jolley Be Good 5K Run/Walk; the city’s annual Christmas Tree Lighting, Boat Parade and Street Parade; Cookies and Milk with Santa; the City’s 15th Anniversary Celebrates ‘Movie in the Park’; Community Health Fair; Spring Jubilee; and tons of concerts and programs at Mackle Park.

“We are small but mighty,” says Alex Galiana, the city’s Recreation Administrative and Facilities Manager. “There is not a lot of time to rest.”

Certainly not! Because as the Farmer’s Market closed its most successful season in its six year history on April 24th, Galiana, Gordon and the rest of the staff are now gearing up for the city’s summer camp programs, which are slated to begin the day after school ends on June 5th and run through August 16th.

“It is amazing to see how (the market) has really blossomed and how the city has grown with it,” Gordon notes. “Now, we are gearing up for Camp Mackle and our summer enrichment programs… It is like part two of Season.”

To be sure, the Farmer’s Market was a stellar success this year. Just ask one of the 84 different vendors who peddled their wares from 110 booths from November to April.

“This year was fabulous! The best year ever,” gushes Colleen Rose of Fort Myers-based C&J Produce. Rose’s company works with various farmers in Southwest Florida, bringing their fresh fruits and vegetables to farmer’s markets in Cape Coral and North Fort Myers, as well as Marco Island. Her two booths are always stocked with Ruskin King Beefsteak tomatoes, sweet Florida onions, crisp corn on the cob and a wide variety of other crops.

“The Marco Island market has more people, and they are very friendly. People seem to be generally happier here,” adds Rose.

Beth Brown-Rinella of Goddess I am in Naples agrees. She was among the first vendors to sign up for the Marco Island Farmer’s Market when the city took it over six years ago. “This market was in my 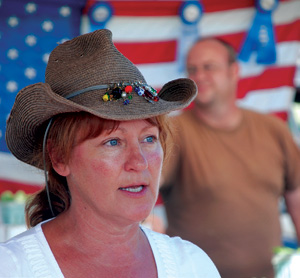 Colleen Rose and her produce booth have become a Farmer’s Market favorite.

own backyard. I went around to help get more vendors,” she remembers.

It appears the efforts of all involved have paid off. In addition to the record number of vendors and booths this season, market attendance tipped the scales this year at 2,000-2,500 visitors each week, and roughly 40 vendors were put on the market’s wait list. Another 20 vendors were just turned away.

“This season was great,” says Galiana. “It was the most successful season we have had.”

Now, with just about a month until school ends, the Parks and Recreation Department is faced with a quick transition into its summer camp programs. This summer, the city is continuing its tradition of offering Camp Mackle, as well as the more detailed summer enrichment programs, such as sailing, jewelry making and the new junior chefs program.

As always, Camp Mackle will be a full summer day camp with activities for campers ages 6-11 (K-5) from 7:30 AM until 6:00 PM. This year’s theme is “It’s a Jungle Out There,” and each week will be filled with guest speakers, arts and crafts, games and field trips supporting the theme.

Rates are the same as last summer at $20 per day, $80 per week and $700 for the entire summer. Currently, staff is in the process of camp planning and hiring counselors.

According to Gordon, though, this summer’s camp format will be a little different. For years, the camp has used an activity-based program, where the campers would be able to pick the activity they wanted to do and all would participate regardless of age. That meant Kindergarteners would mix with fourth and fifth graders from time to time, and sometimes — especially when doing athletic activities — conflicts would develop between the different age groups.

To alleviate those issues, this year’s Camp Mackle will employ a two-group system, dividing the kids up by age. Grades K-2 will be group A, and 3-5 will be group B. “We thought about this last summer, but moved on with the old format,” explains Gordon. “We are still trying to work out the kinks, and make sure everyone is happy with it.”

After the hustle and bustle of the Farmer’s Market, Gordon and the Parks and Rec staff welcome the change of focus. “It keeps us busy,” says Gordon. “We are looking forward to it.”