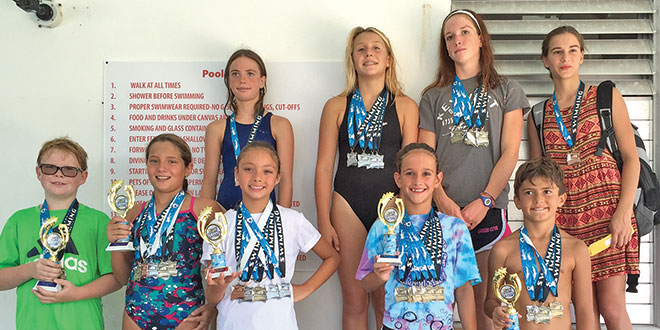 Submitted PhotosCaelan Burt, left, sister Maddie and Gleb Korchagin are all smiles after claiming best overall in their age classes at the Key West Invitational.

Kamal Farhat has spun his swimming magic at the Greater Marco Island Family YMCA for many years. His crop this season is no exception to superlatives. With 48 swimmers in his program, Farhat has enough for four competitive teams in varying age groups.

Nine team members went to the Key West Invitational, bringing home a slew of medals. “Each had individual bests in many races,” Farhat said. They medaled in every age group, with eight winning best overall.

Maddie Burt scored gold in the 100 and 50 butterfly, 100 and 50 freestyle and in 100 individual medley, claiming best overall for 14-year-olds. She has already been 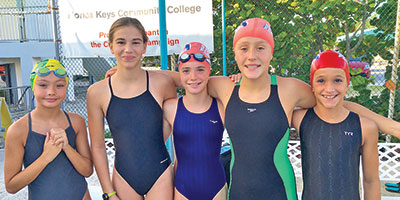 to state competition 12 times in her eight years. She broke the state record in the 100 butterfly in July at the Florida Swim Invitational. Her sister Caelan, 10, won best overall for 10-year-olds. She won the 50 butterfly, 50 freestyle, 50 backstroke, 50 breaststroke and 100 individual medley. All her times were personal bests. She has already competed in five state events. Caelan said she took up swimming five years ago, “because my sister looked so cool and I wanted to try it.”

Michael Distel was first overall for 10-year-olds. Pretty good when it was his very first meet. Gleb Korchagin won overall for 8-year-old boys.

He trimmed 17 seconds off his winning time in the 25 butterfly, while also racing to first in 25 backstroke, 25 freestyle and 25 individual medley. His mom, Ksenia, urged him to try swimming to see if it would help relieve neck and back pain.

Sophia Whitney, 9, and Karla Upham, 12, were second overall in their age classes. Mia Witthoff, 12, was fourth overall in her age class. This was only Nash’s second meet, and she qualified for the Junior Olympics on her 200 freestyle. At her first-ever meet, Emma had the most points, coming in number one overall for nine-year-olds.

Farhat has also advanced the Marco

Emma Nash goes all out at swim practice.

Island Academy’s swim program since it began three years ago. He started out with three girls, Susan Faremouth, Lisa Cottage-Ramnick and Kasey Bersh. He now has six. Bersh graduated in June.  Juniors Faremouth and Cottage-Ramnick both reached the state Class 1A regional finals last season.

Many of Farhat’s swimmers have gone on to be standouts, primarily at Lely High School and St. John Neumann. A number have also won college scholarships. Farhat said his swimmers first learn the mechanics of swimming and then shape their techniques. Endurance and speed tops off the winning swimmers’ needs. “At the same time you have to make it fun,” Farhat said. “With those combinations swimmers do very well.”