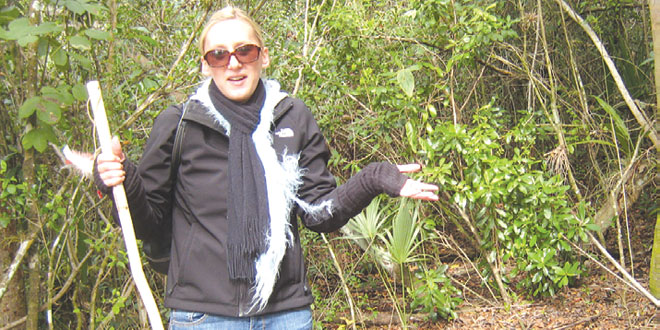 Remind me again why I’m leaving this place?

The first time I visited Goodland, I was about five years old. I don’t remember, but my mom does. She vividly recounts the story of the family going to dinner at The Little Bar and how my younger brother, still an infant, made a massive mess of himself. My mom was horrified. She spent a lot of time in the restroom with him that evening. When she tells the story even now, I can hear the embarrassment in her voice.

I do, however, remember the second time I visited Goodland. It was February of 2005. I had just moved to Marco Island from the suburbs of Chicago. I was all alone — no family, no friends. I was lucky to meet a friend pretty quickly, and she brought me by boat to Stan’s on a Sunday. Any first-timer at Stan’s knows the feeling — it’s like nothing you’ve ever experienced. That day, I learned about the Buzzard Queen, and decided one day I would become one.

Two years of living on Marco and working in Goodland passed quickly. In the summer of 2007, I went back up to Chicago and decided to stay there, saying goodbye to Marco Island. 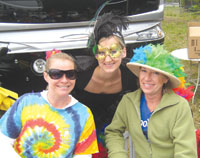 Goodland had other plans for me. I “visited” Goodland for the third time for a Valentine’s Day wedding; I was a bridesmaid to two close friends I had met while previously working there. The wedding was waterside at The Little Bar, and the reception was in a friend’s backyard with live music from local entertainers. It was simple; it was beautiful; it was Goodland.

So I decided to stay, and I’ve been a Goodland girl ever since. I had my suitcase, and that was it. I called my dad. “Dad, I’m not coming home tomorrow, and I’m not going to be returning to Chicago. I’m sorry, but I have to quit working for you immediately.”

“I knew it,” he said. He didn’t even care that I left the family company without any notice, but he did have his concerns.

Where would I live? “In a shed in my friend Jenni’s backyard.”

What about my car? “I’ll fly back and drive it down after season.”

How will you get around? “I’m working just down the street, and I have friends that will drive me into town.”

And your clothes? “I’ll be fine for now, but could you maybe ship me a box when you have time?”

Friends I miss, friends I will miss and friends I’ve been happy to see return to Goodland. This was a great night! SUBMITTED PHOTOS

are you living on a commune now?”

He was dead serious.

I guess it sounded crazy and maybe I was; but I felt really lost, and it seemed somehow that Goodland would have the answer.

The shed I quickly moved into was really the former art studio of Tara O’Neill, artist extraordanaire. It had a regular door, two windows and an a/c unit. The floor and ceiling were still bare plywood and the walls just plain drywall. I spackled, painted, found cheap carpeting and even learned how to frame out a window and build a closet. It was beautiful when I was done with it. I miss it sometimes. It was cozy and safe — and I didn’t even have a key to lock it! But it was always safe.

It never did have a bathroom, though. So, on drunken nights, the yard would often become my toilet. It was much closer to the house anyway.

That’s how I lived for a couple of years. I was a waitress and a bartender. I worked hard, and I played hard. It was the life I dreamed about as a 14-year-old girl at her first Jimmy Buffett concert. It felt like freedom; it was paradise.

Sooner than later, my 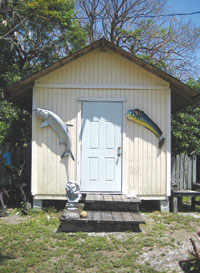 My shed. Don’t be jealous. PHOTO BY NATALIE STROM

roots were firmly planted on this old Indian shell mound. My neighbors became my friends, and then they became my family. I worked odd jobs all over town along with my regular gig for seven years at The Little Bar.

After two years, I moved out of the shed, and in the process, I got a dog. She was a good dog — a Goodland dog. She lived here her whole short life.

In June of 2010, I began writing the Goodland Life column for Coastal Breeze News. It was scary at first. Our community is kind of private, and we watch out for each other. Broadcasting how we live proved to be difficult at times. For the most part, I think people enjoyed reading this column. I really enjoyed writing it, and coming up with funky and fun ideas. It wasn’t too hard given the regular shenanigans that take place here!

I moved up in the world of the Coastal Breeze until I was writing much more than stories about Goodland. I found a passion that I never knew I had. This place is what started me on a new career path. 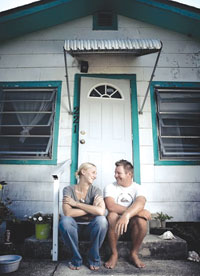 Colorado. Many people have known for a while, many may not know yet, but by the time this edition comes out, I will be only days away from a cross-country move.

You see, of all the good things that have come my way in Goodland, the best is that I found the man of my dreams. They say, “You have to love yourself before you can truly love someone else.” I think Goodland, it’s people and much of the Marco community too have helped me find myself and learn to love myself.

When I did, I fell in love — true love. Three years, a dog, a car and a lot of serious verbal commitments later, Josh and I are heading to the mountains where job opportunities await us both. We are excited to pursue a life of skiing, snow and COLD! (I know…cold. It’s going to be quite an adjustment.)

Living in Goodland has been an awesome ride. I did become Buzzard Queen in 2009; I won for best architecture at Spammy Jammy one year; I became a godmother; I became a Goodland Witch; I learned to love the history and environment of the Everglades and Ten Thousand Islands; I learned how to

The Goodland Community I always talk about. Here we are at the Goodland Civic Association’s Spring Fling Picnic for Goodlanders. One big family!

start a non-profit when helping form the Goodland Arts Alliance; I learned how to throw an arts and music festival; and I became a board member of the Goodland Civic Association.

Goodland will always be my home, and the people will always be my family. It’s not always easy to make big changes, but sometimes it’s for the best. I’m sad, but I’m excited. I’m nervous to leave, but at the same time, I can’t wait to go. I will miss so many people, and I think I will be missed too; but I will always have the memories, and I’m grateful for that.

I want to sincerely thank everyone who has supported both Josh and me throughout the years, in good times and in bad. This truly is a tough transition, but at the same time a very exciting one.

I suppose if I was fine with moving to Florida alone (twice!) and living in a shed for two years, I can be up for a new challenge and adventure… and this time I won’t start out all alone. So, for now, it’s on to the next chapter, and hopefully it will be just as good as it was here in Goodland. And if not, we can always come home.