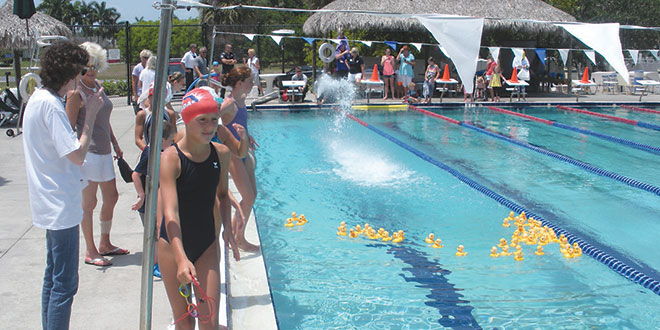 The Greater Marco Family YMCA will again present a wide-ranging assortment of fun activities, and healthy living information for the entire family at its annual Healthy Kids Day and Duck Derby.

Set for April 30 at the organization’s Sand Hill Street campus, the dual events are held back to back, starting with Healthy Kids Day, which runs from 8 AM to 12:30 PM, when the 21st Annual Duck Derby fundraiser begins.

Despite the name, “there’s a little bit of something for everybody, young and old,” Joel Frysinger, the Y’s program coordinator, said of Healthy Kids Day.

The event will include a bounce house, food and refreshments, a book fair, games and relays,  preschool fitness exercises, a “Bikes for Tykes” giveaway and free swim lessons for all.

DJ Gustavo will provide music by the pool, which will be open to the public throughout the day.

Starting at 8 AM, there will be interactive exercise class demonstrations for all ages, such as Zumba, karate, pickleball and power yoga, led by their respective Marco Y instructors, and information on Y programs. There’ll be an 11 AM start for Healthy Kids Day’s health fair, which will including 30 vendors “that support healthy living and lifestyles for adults and children,” said Charlene Garcia, the Y’s school-age (after-school program) coordinator and chief organizer for Healthy Kids Day.

The roster of vendors will include Marco’s police and fire-rescue departments, The Golisano Children’s Hospital of Southwest Florida, Walgreens, the Collier County Health Department tooth fairy, and the United Arts Council of Collier County, which will conduct art projects for children.

• A “goody bag” filled with free samples to the first 100 participants. 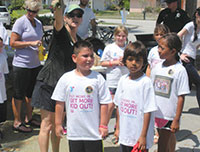 will be housed in the Y’s $1.2 million, 5,750 square-foot, youth development center, which opened last October.

Fruit kabobs will be prepared in the youth development center’s kitchen by participants in the Y’s Wonder Girls program who will walk around, passing them out to the crowd. Wonder Girls is an after-school program designed to empower eighth grade girls to adopt healthy lifestyles.

“It’s just a fun, family day for everybody to come out and enjoy,” said Garcia.

The Duck Derby was started by Dottie “Miss Dottie” Weiner, who started the Y’s “Learn to Swim” classes in 1972 and directed it until 2012.

The ducks are entered in three separate races, but unlike past years, it won’t be fire-rescue department personnel propelling the ducks down the pool with a fire hose at this year’s races, which begin at 1:30 PM. Instead, it will be members of the Y’s swim team who provide the propulsion.

“There’ll be a basket with ducks and their job will be to swim down and get as many ducks as they can and swim back to the starting line,” said Frysinger, who is coordinating the event. “Whatever swimmer wins, we’ll draw the winning duck out of their basket. We thought we would try something different, add a little excitement and get the kids more involved.”

Swim team members traditionally swim down a lane using a kick-board and return to the start, holding flags aloft as the Star Spangled Banner plays, kicking off the derby. But this year, that segment of the event will have a slight twist to it, one that’s being kept secret, said Frysinger.

“It should be a very cool looking display,” he added.

Also new this year will be the aquatics department’s free swim tests for all children accompanied by a parent or guardian.

Frysinger said the Duck Derby serves not only as a fundraiser, but as a way “to raise awareness of what we do at the pool.”

For more information on Healthy Kids Day and the Duck Derby, or purchasing a duck, visit www.greatermarcoy.org or call 239-394-9622.