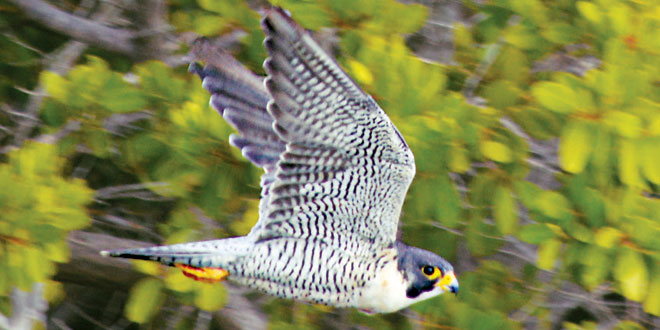 The “barred” feathers on the chest and underwing, as well as the slate grey coloring around the eyes and head, make the peregrine falcon easy to recognize.

On September 23rd at 4:21 AM, Eastern Time, the first day of fall officially arrived. Here in Florida we all look forward to cooler temperatures and less humidity. We also notice the absence of some of our summer migratory animals, and the return of many others.
The first day of fall is also known as the Autumnal Equinox. This occurs when the equator is closest to the sun. It also happens in the spring, known as the Vernal Equinox. It takes place twice because the Earth tilts as it rotates around the sun, and on two occasions the planet’s line of zero degrees latitude will be closest to our Sun.
In the fall, as the northern hemisphere tilts away from the sun, we get cooler. As the temperature drops, many birds migrate to warmer weather, and so do their predators. The most basic answer to why birds travel here is food supply.
As temperatures further north get much cooler, bugs and other sources of food for some birds disappear. These birds instinctively know that traveling south will lead them to a supply of protein to sustain life during this period. Now some of these birds are also prey for other birds. Such is the case with the peregrine falcon.
In addition to other falcons and hawks, the peregrines migrate from all over North America to warmer climates.
Those out west will find a route towards Mexico, then even further south. Many in Central and Eastern North America will take a path that leads through Florida. As I write, there is a huge kettle (group) of peregrines passing our area. Some will stay here, others will continue to Central and South America.
Those moving on will use the Florida Keys as a launching point. If we look on a map from Key Largo to Key West, we notice that there is a curve to the landscape, rather than a straight line. Along this curve is an area known as Curry Hammock State Park, and this is the spot used for those falcons flying even further south. These falcons will fly across the Florida Straights to Central America, and some continue as far away as Venezuela and other parts of South America. During early to mid-October bird counts are taken at Curry Hammock, and it is not unusual to see 500 to 700 peregrines in this area during this time.
The name “peregrine” means pilgrim, or wanderer, and these birds have one of the longest migrations of any North American bird, some traveling as 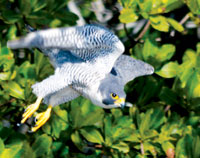 A peregrine falcon takes flight from the branch of a mangrove tree in the Marco Island waters. PHOTOS BY BOB MCCONVILLE

much as 15,000 miles in a single year.
Not all will make this long journey. For several years a few peregrines have been seen, on several occasions, under the Jolley Bridge for a period of months. Also, keep an eye in tree branches near Channel Marker 27. A falcon has been there, during the fall and wintertime, for 3 years, possibly more.
Feeding primarily on other birds, they don’t seem to have a preference for one species. Their prey includes wading birds, gulls, ducks, grebes and many others. They are also very good pirates, stealing fish and rodents from other raptors.
Their cruising speed is around 30 mph, but will increase to 65 mph when pursuing prey. They are the fastest animals on the planet when diving on their victims. Quite often they will fly at great altitudes searching for an unsuspecting bird passing well below them. They will then go into their “stoop” (hunting dive) in which they fold their wings in close to the body, begin their descent, and strike the prey in mid-air, breaking the neck or back. In this “stoop” they can attain speeds in excess of 200 miles per hour! There is an extra layer of film on their eyes so that they can see while diving at such speeds, and their nostrils have evolved so that they can breathe during the stoop.
Compared to other area raptors the peregrine seems small, just slightly larger than an American crow. Their slate grey wing feathers, and bandit-looking dark feathers around their eyes, make them easily recognizable.
It is good to see so many peregrines on the planet again. They started disappearing in the mid 1930’s when egg collectors pillaged their nests. After World War II, pesticides such as DDT became prevalent in the birds’ systems. This caused the female to produce eggshells that were thinner, in fact, so thin that the egg would not incubate properly. By 1964 not one of these magnificent birds was seen east of the Mississippi River. With the ban of certain pesticides, and with help from scientists to reintroduce the bird, populations have increased, and the peregrine was removed from the endangered species list in 1999.
Keep an eye on the sky for these magnificent hunters at this time. Some may just be passing through the Marco area, while others might stay awhile. It is one more stepping stone in Mother Nature’s master plan.

Bob is the owner of Stepping Stone Ecotours and a Naturalist surveying dolphins on board The Dolphin Explorer. Bob loves his wife very much!