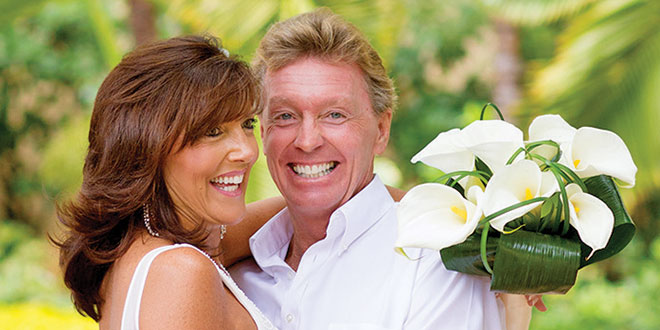 Years ago, the word “dementia” was rarely heard. Senility was the more common expression. The term “senile” would conjure up an image of a forgetful old codger whiling away the time in a rocking chair. In today’s world, dementia is becoming more of a household word, but many are still unfamiliar with the correct definition. Dementia is actually a broad category of several different brain diseases. Alzheimer’s disease has been the most commonly recognized name in this group of diseases, perhaps due to the well-publicized accounts of Ronald Reagan’s battle. But it may seem that there is a “new” type of dementia on the rise as we read more and more about Lewy body dementia.

This type of dementia is really not new at all. Cases of Lewy body dementia (LBD) most likely never received definitive diagnoses in the past and were lumped together with other types of dementia. The disease has received much recent attention in the media due to the suicide of actor Robin Williams in 2014. The autopsy of his body revealed the presence of diffuse LBD. Williams had previously been diagnosed with Parkinson’s disease and had exhibited signs of depression, anxiety and paranoia, which are all symptoms of LBD. Williams’ widow described the disease as a terrorist inside her husband’s brain.

So what exactly is this mysterious form of dementia and what distinguishes it from Alzheimer’s disease and vascular dementia? At present, Alzheimer’s is the most commonly diagnosed type of dementia. It is characterized with the presence of plaques and tangles in the brain. Vascular dementia is the second most frequently diagnosed type, and is associated with the occurrence of mini strokes and decreased blood flow to the brain.

Lewy body dementia is linked to abnormal deposits of the protein alpha-synuclein in the brain. These deposits were discovered in 1912 by neurologist Friederich Lewy in people with Parkinson’s disease. Hence, these abnormalities are now called “Lewy bodies.” Alpha-synuclein plays an important role in the nerve cells of a healthy brain, particularly at the synapses where brain cells communicate. In LBD, the protein forms into clumps inside the brain’s nerve cells, resulting in damage to several areas of the brain. The effects are exhibited as disturbances and impairment in information processing, perception, thought, language, emotions, behavior, movement, recognizing smells, sleep regulation and the ability to form new memories. REM sleep disturbances are the most distinguishing features of LBD, as patients will physically act out their dreams by thrashing around, falling out of bed and possibly displaying physical violence as if being attacked. Visual hallucinations are common even early in the course of LBD.

LBD can be further broken down to two categories within – dementia with Lewy bodies and Parkinson’s disease dementia. This distinction is made based upon the timing of symptoms. Dementia with Lewy bodies involves cognitive decline that is noted within a year of Parkinsonism (difficulty of movement, walking and rigidity). Parkinson’s disease dementia involves cognitive decline that appears years after the first signs of movement symptoms.

At present, there is no known cause or cure.

On Marco Island, Hideaway Beach resident Michael O’Leary, 61, is putting a face on Lewy body dementia. With movie star good looks and a physique of athletic prowess, this retired Bloomfield Township, Michigan firefighter/paramedic, personal trainer, and pickleball medalist was diagnosed with LBD in October 2015. Michael is currently participating in a 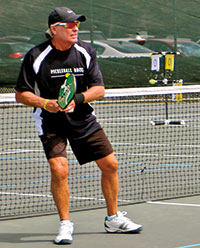 A pickleball medalist, in April Michael played at the U.S. Open Pickleball Championship in Naples.

clinical trial in Boca Raton with renowned neuroscientist James E. Galvin, M.D. The trial is double blind and placebo-controlled, meaning that neither Michael nor his doctor knows if he is receiving the real drug (intepirdine, also referred to as RVT-101) or the placebo. So far he is showing no signs of improvement, but Michael continues to live a life of hope with the mission to raise awareness of this terrible disease.

But his real story is actually one of love. When Michael retired from his job in Michigan, he made the decision to move to Marco Island where he had vacationed annually for 30 years. He was divorced and living alone. Reflecting on his move to Marco Island, Michael said, “It was a good way for me to gather my thoughts, regroup and get my general disposition to a better place. I eventually grew to really enjoy my time alone and had no intentions of ever changing this new life I had discovered.” But then, when he least expected it, his life was about to change. He said “I was having dinner by myself at a local tiki bar on the water one night, talking to a friend, when SHE walked in. A beautiful woman with kind eyes.” That beautiful lady was Cindy O’Daniel, now Cindy O’Leary, an accomplished artist and woman of corporate esteem. When she first met Michael that night, she was vacationing from Cincinnati, but found herself returning to Marco Island two weeks later in what would be a whirlwind romance. The couple married on the sands of Marco Island in March 2012.

Living life in the magic of love at first sight, the couple had no reason to believe that once again, their lives were about to change. This time the change was not a kind one. Michael began to exhibit cognitive changes – loss of short-term memory, confusion, and even some occasional slurring in his speech. This raised a red flag of concern for Cindy and many friends. He was eventually diagnosed with mild cognitive impairment (MCI).

His symptoms progressed and began to include hallucinations, several falls and disruptions of REM sleep. REM is the stage of sleep characterized by rapid eye movement and dreaming. In normal REM sleep, our muscles become completely paralyzed and unresponsive. Perhaps you may have experienced this in the course of having a bad dream. You try to move or even scream, but find that you are unable to do so. For Michael, and others with LBD, their muscles are not receiving the message from the brain to be “paralyzed” and can physically act out their dreams. Michael has had dreams of snakes, resulting in hitting his face with his own hands; dreams of being chased by someone with a knife, jumping out of bed injuring his shoulder and ribs; and a bad dream classic to children- being chased by monsters. For most of us, sleep is a time of peace. For Michael and others with LBD, it is a time of terror. Fortunately, for Michael, Cindy has been able to calm him down on many occasions, preventing injury. However, Michael now sleeps in a hospital bed, away from Cindy, as there is a possibility that he could become violent in his sleep and attack her.

Yet Michael is able to function in many ways. LBD symptoms are not always constant. Things can 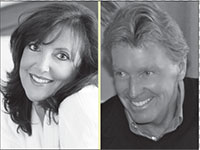 change within a short period of time. Michael played in the U.S. Open Pickleball Championship in Naples just this past April. He was the only U.S. Open Pickleball player who was actively participating with a personal diagnosis of LBD. He made a point of saying that there was one other player who had been diagnosed with Parkinson’s disease. These athletes are the epitome of hope, strength and courage. Sadly, Michael did fall during the course of the tournament and suffered a concussion from which he is still bravely recovering.

Michael and Cindy eat dinner almost every night in the clubhouse of Hideaway Beach. The Hideaway community is known for their spirit of generosity, warmth, friendship and dedication to humanity. The O’Learys enjoy the loving fellowship of their many friends. One such friend is Betsy Beaver, of the Hideaway community, who first approached Coastal Breeze News with the idea for this story. Betsy shares the same passion as the O’Learys in the quest to raise awareness of this dreadful disease.

That awareness is so important as definitive diagnosis of the disease is crucial. Certain drugs, particularly anti-psychotic medications that may be used to alleviate symptoms in other forms of dementia, can prove to be detrimental, even deadly if used for patients with LBD. Thankfully, the awareness is growing. October 22 has been declared Lewy Body Dementia Awareness Day. Education and information about this disease offer hope in the quest to eliminate all forms of dementia from our world.

LBD is a personal hell for those living with the disease themselves, their families and their caregivers. Michael professes that he is not a religious man, but says, “There had to have been some plan or greater reason of why Cindy and I met. I would be unable to survive without her.” Reflecting on the days when they first met, he said, “Words can’t describe the incredible comfort and desire I felt for her. I truly had never in my life felt anything like this before.” Cindy keeps track of all the medical insurance claims, constantly checking to be sure the correct insurance codes are being used. In the course of the clinical trial, Cindy records all of Michael’s activities, including his bad dreams and falls. She also records the good activities of social outings, physical workouts of cycling, elliptical training, weight training and occasionally even paddle boarding. These are the activities of living. And Michael is very much alive!

The couple is preparing to attend the upcoming wedding of Michael’s son. Michael plans to deliver a speech with a message of hope and everlasting love. He acknowledges that the day will come when he most likely will be unable to remember or recognize those he loves. With his hand on his heart, he said, “I want them to know, they will always be right here.”

The photographer for Michael and Cindy’s wedding featured their love story on his website. The photographer wrote, “You could probably make a movie about these two, and maybe one day someone will.” Those words were written before Michael’s diagnosis. How prophetic those words have become. Their story is one that should be preserved for all time. Michael and Cindy O’Leary are the living portraits of courage and love. May the power of our universe touch their lives with healing each day.