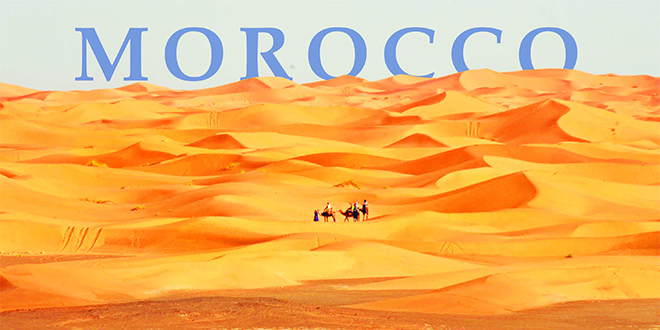 The silence was intense. There is no other place I have ever been that is so completely devoid of sound. We were standing at the top of a sand dune in the world’s largest desert, the Sahara.

My wife, Jill, and I had been riding our camels accompanied only by a camel herder who clearly was in his own world. Bouncing up and down through the undulating sand dunes for what seemed a very long time, it was a relief when we finally dismounted. We were standing at the top of a sand dune in this vast land of 3.5 million square miles of sand not too far from the border between Morocco and Algeria. The peaceful stillness in the Vast sea of shimmering sand is stunning.

Morocco is a country that has been largely overlooked, but got back in to US news recently because of the $12 million personal donation from King Mohammed VI to the Clinton Foundation. The country is of great interest to our country, mainly because it is the most stable nation in western North Africa. Locally called “Magreb,” or “Arab West.” After protests in 2010, 2011 and 2012 the king, who has ruled the country since 1999, was instrumental in changing the constitution and providing a more democratic government.  Additionally, the authorities hermetically closed the borders with neighboring countries only allowing entry by air or via ferries from Spain. This resulted in a huge reduction in terrorism and protests, so common over the previous years. In turn leading to one of the best economies in this area of the world and a democracy where in general the king is revered. Recently we experienced first-hand what these changes have done for the well-being of the nation and its people.  On October 7th Morocco held its 2nd general elections since the reform of the constitution. We witnessed many rallies  for the twelve parties participating. Due to vast distances, isolated, remote and very mountainous terrain, Morocco still has a literacy rate of only 68.5 %, thus resulting in an almost comical approach to getting votes. Mainly in small villages, volunteers in long caravans of pickup trucks with blaring music were throwing small square pieces of paper into the public gathering. Each party had its own simple sign of an animal or a tractor for people to relate to and a box next to it to show where to put a cross for their party on Election Day.

The most visited sights for tourism are the marvelous walled and well preserved cities of Meknes, Fez and Marrakesh. All three “Imperial Cities” offer beautiful luxury hotels and restaurants. The  limited number of American tourists fly mostly into Casablanca and take a tour from there and Europeans fly into beach resorts like Agadir and start from there. The main highway between these cities is excellent.

We opted for a different and somewhat more adventurous approach. Landing in the capital, Rabat, we had a Hertz car reserved. It turned out to be a small Eastern European built 4×4 SUV with 90000 miles. Our destination was Fez, the oldest city in Morocco dating back to 789 and is a UNESCO World Heritage Site.

It was our first experience with 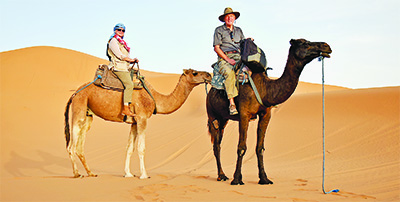 Riads. A Riad is a traditional house, mostly two to four floors with all rooms looking on an interior open courtyard and garden. The name comes from the Arab word for garden. They used to be the homes of courtiers and rich merchants. The Riads are inward focused, offering privacy. There are no large windows on the exterior walls of clay or mud brick in support of Islamic notions of privacy. In cities these homes are located inside the medinas and therefore cannot be reached by car. Finding the location is certainly a challenge and during our trip in Morocco we left our car in spots I would never have considered in other countries and walked with our luggage through uneven cobblestone alleys. However, I hasten to add that in two weeks in Morocco we never once felt threatened, nor met an unfriendly person.  Our first Riad, Chez Calife in Fez, was owned by a Frenchman, Alex, and his Moroccan wife, Jasmine. After meeting and working in Paris, they decided to move to her home town where they bought an old home in the medina which they restored to its former glory and decorated beautifully with antiques from their travels through Morocco and other countries. Under their guidance, the service was impeccable and meals delicious. Fez, the modern city, is beautiful with wide Parisian style boulevards lined with chic shops, restaurants and cafes, but it was the old “medina” that lured us in. It is a labyrinth of narrow alleyways, home to huge clusters of stray cats, small markets and an endless array of tiny shops displaying their wares on the street. Shops are grouped together according to the products they offer. Vegetable and fruit vendors are all together in one area, clothing vendors together in another area and carpets in the next. The locals haggle over prices of everything and 50% off the asking price is common. Aside from an interesting variety of museums and mosques, probably the most impressive experience here are the Chaouwara skin and dye tanneries in the leather district. Located in the center of the Medina one cannot miss it as the   smells of animal skins and dye directed us from far away. The only way to observe is from above and one climbs stairs through several floors of one of the leather shops under guidance of a salesman trying to sell exquisite bags and suitcases. The craft of turning animal hides into soft leather goes back thousands of years. As you enter the medina initially your senses are immediately assaulted by a cacophony of foreign sounds in addition to the oft repeated calls to prayer and collective smells of the souks.

Our main goal in Morocco was to enjoy the many different facets of the landscape, so we opted to drive smaller roads on our way to Merzouga in the Sahara Desert. The mountain road was in good condition with spectacular scenery. We made a stop at the lovely well-groomed university town of Ifrane, established in 1929 during the French Protectorate. At an altitude of 5500 feet, it feels and looks very much like a European mountain village. A pleasant cool summer draws the people from the northern cities, as well as the king whose summer palace 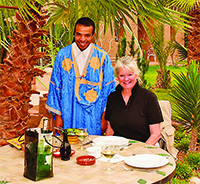 is here. The next day we drove further south to Erfoud. This is as far as most organized tours travel and from where many excursions into the Sahara desert are offered.

We continued to the small town of Rissani with the last gas station on the edge of the Sahara and from there our well performing 4×4 SUV carried us in a straight line amidst endless sand and stone areas, passing an occasional sheep herder with his flock. Camels in small groups or single seemed to be wandering aimlessly to the last frontier in the Sahara Desert: The small oasis of Merzouga.

With a healthy amount of anticipation and some searching through the village, built mostly with mud and some reminiscence of the old west we finally reached our Kasbah Azalay. A beautifully constructed small two story fortress located in front of over 800 feet high sand dunes. We were warmly welcomed by one of the six brothers owning our desert retreat: Joussef. By this time we were desperate for a glass of wine to celebrate our arrival. However, Morocco is 99 % Moslem and there is no alcohol openly for sale, especially in the south. After our welcome mint tea Joussef was kind enough to recruit one of his brothers to escort us in our car via yet another dirt road through the village to the back entrance of the largest hotel in the area. We were taken into a small locker room where the hotel’s few wines were stored. They were from large wineries near the city of Meknes in the northern part of the country, who mostly export. We happily paid the exorbitant price in cash and the money was quickly stashed in a box inside the refrigerator.

Back at our hotel we had a room with a terrace and a large olive tree overlooking the sand dunes. Glass of wine in hand and an assortment of olives, we watched the sun set over the sand dunes creating an ever changing mystical landscape with a myriad of colors. We enjoyed an excellent Tagine dinner – typical Moroccan dish prepared in a clay cooking pot with cone shaped cover – on a terrace above the large swimming pool before retiring to our wonderfully romantic room with several alcoves of sandstone bricks brightly decorated with carpets and pillows of saffron to deep blues and reds.

The next day, Joussef took us in his jeep to explore the dunes, the water canalization and local oasis farm plots, explaining their cooperative techniques, and finally to visit Berber Nomads in their tents. It was early that evening that we embarked on our camel journey in the sand dunes of constantly changing colors due to the angles of the setting sun.

Jill and I decided that as a means of transportation, camels were not for us and we were glad to return to Kasbah Azalay in the pitch dark of the early evening. It is hard to imagine the caravans of merchants on camels spending weeks in the desert. In the village there is a sign: “52 days by camel to Timbuctoo.” Two days later we sadly said good bye to our new friend and drove north again towards the western side of the Atlas Mountain range with a deep fascination for this amazing country.