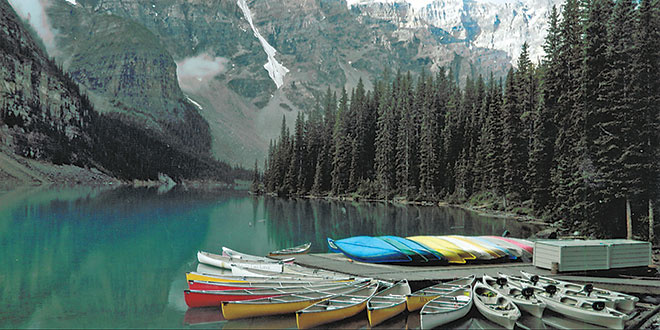 On a trip sponsored by Grand Circle Travel, which specializes in travel by small groups of seniors, I was able to explore Banff and Jasper National Parks, and the Canadian cities of Calgary, Whistler, Vancouver and Victoria.

We began our trip in Calgary, once known as a cow town famous for its rodeos, and now is a bustling prosperous city that has benefited from the oil trade. Its open spaces and traffic-free streets make it an attractive place to explore. We saw the Olympic park were the winter games were held in 1988.

From Calgary we drove through the rolling prairie country of southern Alberta to visit the UNESCO world heritage sites of Glacier and Watertown Lakes National Parks. We enjoyed a panoramic tour of the mountainous wilderness area of the national parks that was impeded by chilly overcast weather, but nevertheless enjoyed a scenic splendor. I was thrilled to capture a photo here of a bighorn sheep that emerged from the forest.

From here we ventured back North to spend three evenings at the famous Canadian resort city of Banff, that sits in a charming valley beneath a range of National Park mountains. It enjoys a flourishing tourist trade, but has preserved its rustic image. A Gondola ride afforded views of the surrounding landscape. And memorable visits to local First Nation (Indian) museums, towns, and schools illustrated the difficult challenges these indigenous people have faced and the rich and proud cultural heritage they have valiantly sought to preserve.

The 143-mile ride from Banff to Jasper takes one along the Icefields Parkway, through some of the most majestic and stunning alpine scenery in the world. The route also shows many glaciers, snow-capped peaks and the blue-green glacier waters of Lake Louise and other spectacular scenes. It is one of the most awesome terrains I have ever viewed. At one stop we boarded and Ice Explorer snowcoach for a ride on the huge Athabasca Glacier, one of the largest accessible in the Rocky Mountains. I walked on an icefield, which is almost 1,000 feet thick. Sadly, the glacier is receding from global 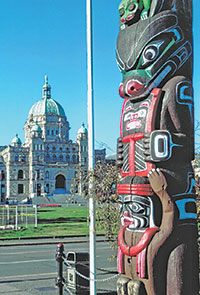 In Victoria: Parliament and a colorful totem pole.

Our tour continued by exploring the wilderness by water which included rafting a river and riding a boat on one of Canada’s most pristine and photographed lakes, bordered by glaciers and mountains of the Continental Divide.

Next we ventured from Jasper on another scenic drive along more alpine grandeur to the modern ski town of Whistler, which was one of the major venues of the 2010 Olympics. I was fortunate on this trip to capture a photo of a large horned Elk as it sought to cross the road. In addition to alpine ski trails, Whistler is an exercise haven which also features hiking and mountain biking.

Our official trip ended in cosmopolitan Vancouver, which is the third largest city in Canada and the largest in the west. It has a natural setting surrounded by water, mountains and lush forests. It has open spaces like Stanley Park, which features a large display of carved totem poles. Its Chinatown is the second largest in North America, after San Francisco. A so-called “Gastown,” named after a colorful character, is the oldest section of the city, with many old buildings and special white-globed lampposts covered with hanging flower baskets.

On my own, I took a ferry to nearby Victoria, described as one of the 20 most beautiful cities in the world. I concur. On the way over I was able to see a large school of whales navigating the current. Victoria is a vibrant city full of maritime and floral artistry. Flower baskets and gardens adorn its streets and parks, yachts dock in its harbors, and totem poles fill its parks. A huge Parliament building with elaborately carved facades and statues face a yacht basin. Victoria has preserved its past and enhanced its present.

Lovers of nature and the outdoors will fall in love with the treasures and scenery of Western Canada.