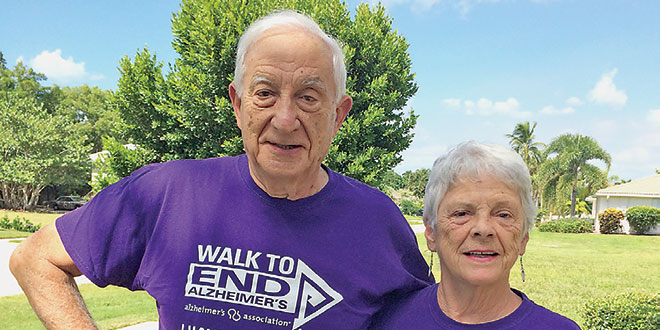 My 17-year-old granddaughter ran two half-marathons this summer, each 13.6 miles. Back in school she’s running three to five miles daily with her cross country team. She’s getting plenty of exercise. By contrast, this summer I walked up to two miles four or five times weekly and also swam occasionally. Because of traveling I seldom found a fitness class to attend as when on Marco. So reading the latest newsletter from AARP, I wonder if I’m getting enough exercise for my brain to be at its healthiest.

The September 2016 AARP Bulletin’s headline reads: KEEP YOUR BRAIN YOUNG BY STAYING FIT: Exercise Can’t Prevent Alzheimer’s but it Can Cut the Risk in Half. More than Sudoku, crossword puzzles and computer training, the article by Elizabeth Agnvall states that exercise is the answer to retaining mental clarity and improving the odds of staving off dementia. She adds, just as exercise keeps muscles strong, blood vessels flexible, and stress low, it also enhances mental abilities, stops brain shrinkage, and promotes the formation of new neurons.

According to Arthur Kramer, senior vice provost for research and graduate education at Northeastern University in Boston, quoted in the article, studies suggest that people who are physically active have lower rates of Alzheimer’s and other age-associated neurodegenerative disorders. One study targeted the hippocampus, an area of our brain that shrinks as we age leading to memory problems. Research by Kramer and others showed that when previously sedentary men and women 50 to 80 years old walked around a track 40 minutes a day, three times a week for six months, their hippocampi actually increased in size. A control group who did not walk had smaller hippocampi than when they started.

You may have heard the saying, “If it’s good for your heart, it’s good for your brain.” The evidence cited in the article indicates this is true. Regular exercise helps prevent high blood pressure and stiffening of the arteries. Keeping blood vessels healthy ensures an optimal flow of blood to the brain. In addition, aerobic exercise creates higher levels of a protein known as brain-derived neurotrophic factor, or BDNF, which helps repair and protect the brain, according to Marilyn Albert, director of the division of cognitive neuroscience at Johns Hopkins Hospital in Baltimore.

Strength training is also good according to Teresa Liu-Ambrose, director of the Aging, Mobility, and Cognitive Neuroscience Laboratory at the University of British Columbia in Vancouver. Her study also mentioned in the AARP article found that women who did moderate strength training at least once a week showed a 15 percent improvement on mental-skills tests.

But where are the study results that cut the risk of dementia by half? At the end of the AARP article, a UCLA study is cited of 876 men and women aged 65 or older which found that those who were more active had a 50 percent reduced risk of developing the disease. OK, that is worth hitting the gym for on a regular basis. But if you’ve not been exercising, the experts advise checking with your doctor first.

Googling exercise and its benefits online, I found a 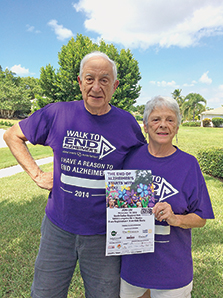 Submitted PhotoRich and Joyce Kaelin, who will participate in theAlzheimer’s Walk in Naples on November 19.

particular study from the U.K. of interest, which followed 2,000 Welsh men for 35 years. The areas assessed by researchers were: regular exercise, not smoking, moderate alcohol intake, healthy body weight, and healthy diet. Although exercise had the greatest effect in terms of reducing dementia risk, people who followed four or five of the above were up to 60 percent less likely to develop dementia. That is good news.

But then, my husband was a Welsh man, one generation removed. He developed the first subtle signs of dementia in his late 60s and was diagnosed with Alzheimer’s disease in 2005 when he was 74. He had done all the positive things mentioned in the Welsh study, but it didn’t prevent him from getting the disease. And here’s the reality. No studies so far have indicated that exercise can prevent dementia. However, there are several randomized trials underway now in Europe investigating this. Check out www.alzheimer’s.org.uk/site/scripts.

Since many of us want to be as healthy as possible through old age, consider the advice of the Global Council on Brain Health (GCBH), an independent collaborative of scientists, physicians, scholars and policy experts convened by AARP to issue recommendations on brain health and exercise. They include: Getting 150 minutes a week of moderate intensity aerobic exercise, incorporating strength training two or more times a week, leading a physically active lifestyle, and staying motivated by exercising with other people. So it’s back to the gym, the Y, the fitness center for all us summer slackers. Now’s the time to get fit.

Another good way to get your exercise while helping raise funds for Alzheimer’s is the Alzheimer’s Walk coming up Saturday, November 19 in Naples. It’s very doable for many people. Participants in past walks sometimes walk slowly, those with disabilities may use wheel chairs, young or old often push baby carriages with children or dogs. The whole route is three miles with two the shorter option. The walk starts at North Collier Regional Park, Livingston Road at 9 AM, with registration from
8 to 9 AM.

I’ll be walking with the Marco Spirit Team and Barb Markel, team captain. Another Marco team led by Karin Hatcher, Lillian’s A Team, was the overall top money raiser last year, with our Marco Spirit team coming in second. For information, to donate, and to register to walk go to Reyes@alzflgulf.org and click on the Naples Walk link.