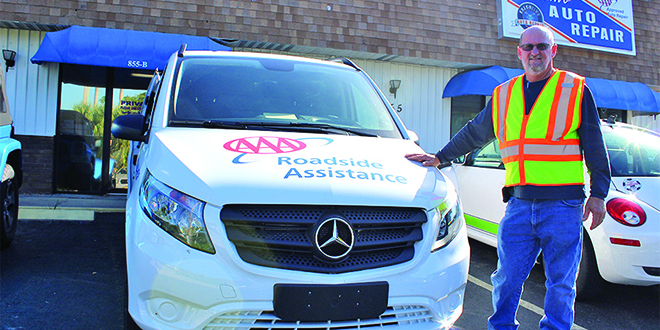 Tara O’Neill checks in on Samuel Falla’s progress with one of her drawing class assignments.

“It’s a little bit different for me to get out of a tow truck and into a service van,” said Dwain Naftal. “The biggest thing about the van is I can pull right up to the car and do my service calls. I have all my tools.”

The service van is equipped for jumpstarts, batteries, lockouts and flat tires for anyone in Marco Island and the four corners of East Naples, Goodland and Isles of Capri. Executive Auto also does the same light duty service for the AAA Motor Club. “It’s got everything in it you want,” said Dwain Naftal.

It seems that the service van is especially useful for returning snowbirds, who often leave their cars sitting idle on the island for months at a time. “A lot of times when people leave their cars here and they come back down from up north all the tires are flat,” said Dwain Naftal. As season gears up, Dwain expects to get a lot more of these calls.

Over the 25 years that Dwain has been in the auto industry here on Marco Island he’s become a staple. He wants islanders to know that he’s still here and is still doing the same service calls, only in a brand new whip.