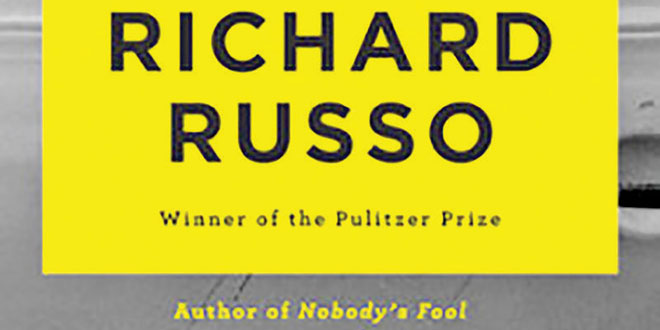 I have just had the pleasure, and a pleasure it was, of reading Richard Russo’s newest book, “Everybody’s Fool.” Some might say it has no plot but it actually does, though I will admit it is rather a subtle one, and you might not really be aware of it until the end when you realize that all the individual stories running through the book have come to a conclusion of some sort, good or bad. What this book really is is a character exploration with a cast of the intertwined, unorthodox residents of the small town of North Bath, New York. If you read Russo’s “Nobody’s Fool,” written in 1993, or saw the movie (with Paul Newman as the lead), you will recognize some of the characters you grew to love, though I would not call this new book a sequel to the other. You can easily read and enjoy this one without having read the other. However, I loved it enough that I have gone back and reread “Nobody…” just so I could have another dose of my favorite residents of Bath. To me the one person who is the thread that ties all the others together is “Sully.” As he interacts with the others we get to know them and their personal idiosyncrasies. And he is certainly not without his own idiosyncrasies. He has recently been diagnosed with a heart problem that gives him, at most, two years to live. You might think that would drag things down but instead it seems to make him all the more determined to do whatever he wants to do, whether it is in work or play. He knows each and every one of the personalities in this town and loves to poke them in fun, keeping a straight face at all times while doing it. You would think his sense of humor would not always be appreciated, but everybody seems to know that while saying what he says he would be the first one to take the shirt off of his back and give it to anyone needing it. Imagine coming home one day to see three suitcases, belonging to your wife, sitting on the curb, only to go in to find her dead at the foot of the stairs after falling down, headfirst, “like a slinky.” And on the table there is a note saying, “I am sorry. I didn’t mean for this to happen. Try to be happy for us.” (Perhaps he might have anticipated her leaving if he thought back to the fact that she had taken a large suitcase full of books with her on their honeymoon, all of which she read.)

This is what has happened to Sully’s friend, Doug Raymer, the Chief of Police. His anguish over these events is intensified tremendously when he finds 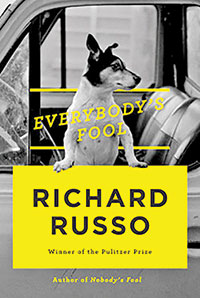 an unidentifiable garage door opener jammed in the seat of her car. He is sure this must belong to her lover and makes it his purpose in life to find its owner. To say this journey takes many bizarre and humorous turns would be an understatement!  Then there is the stammering and not too bright Rub Squeers, the caretaker of the local cemetery. He considers Sully his best friend and follows him like a faithful dog, which is made difficult by the fact that Sully’s dog has also been named “Rub” which often makes it hard to know who he is talking to, a confusion shared by both man and dog. The man, Rub, suffers great frustration by this situation, especially when Rub, the dog, is intently investigating his nether regions, which dogs are prone to do. Bath is not without its female characters. First there is Ruth, Zack’s wife, who has been Sully’s lover for more than twenty years, on and off, but more recently just friends. Zack is well aware of the situation but seems able to live with it, most likely because of his own friendship with Sully. And don’t forget Charice, Doug Raymer’s right hand “man” down at the police station. A very attractive black woman who Doug couldn’t run his office without who yearns to actually participate in police work but is not allowed to for fear she will be hurt. (Her twin brother Jerome, a police officer in the neighboring town of Schuyler Springs, is OCD when it comes to anyone even touching his ‘stang, becomes a large part of the story especially when he becomes convinced Sully has “keyed” his ‘stang and sets out to make retribution.) There is Janey, Ruth’s daughter, who is ever fearful of her ex-husband Roy, just out of prison, who regularly beat her up and seems unable to control himself and his angry outbursts. I could go on and on. There are so many residents of North Bath that you need to know. Richard Russo has managed to bring them each to life with humor and understanding of their very own humanness.I absolutely loved this book and highly recommended it to my husband. He told me it took him awhile to get into it but now finds it as “laugh out loud” funny.

Good Reads, a website that reviews and rates hundreds of books had over 830 ratings and 175 reviews averaging 4½ stars out of 5 for “Everybody’s Fool,” so I am not alone in my feelings. The chances seem pretty good you will love it too.

Diane Bostick has lived on Marco Island since 1987. She was the Founder and President of the Ft. Myers chapter of the Association of Children with Learning Disabilities, President of Jr. Welfare League, Ft. Myers Chapter, and served on the board of the Art League of Marco Island. She is an avid reader, fly fisherwoman, tennis player and crafter. She has currently embraced cardmaking and shares that enthusiasm on her blog: www.mycardsandhowtheygrow.wordpress.com.