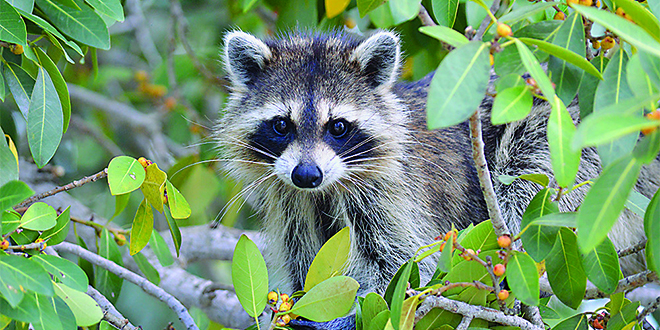 Submitted Photos |Because of habitat loss and invasive species in the Everglades, animals such as this raccoon are not thriving as they used to.

Join Bob at the Marco Island Historical Auditorium on February 22nd at 7 PM as he talks about changes in the Everglades and presents new and exciting photos of the wildlife he has seen in recent months. These lectures are very popular and seating is limited so get there early.

If there is one thing that is constant in life, things change.

This phrase rings true around the globe and through many facets of our individual and collective lives. By the time you finish reading this you will be five minutes older. You can’t gain it back. It is a fact; you have changed just by being alive. This also holds true in nature, and close to home, that means the Everglades.

Disrupted by the progress of man, this vast and once pristine ecosystem is now half of what it used to be. Only recently has the importance of this wonderland come to light. In 2000 a program was set in place to help restore the Everglades, hoping it might again be what it used to be.

Realistically, if these efforts just retard further loss and destruction, it could be considered a success.

More than likely you’ve heard about the water releases from Lake Okeechobee in recent months. These water levels were lowered by way of the only outlets available and that was a route to the coastal estuaries.

For a better understanding, let’s go back to 2004. That year four major hurricanes passed through South Florida, raising the waters in the lake to extremely high levels. Waters had to be released for several reasons. First, the Herbert Hoover Dike built around the lake is aging and might not hold the pressure created by the intake of all of the water accumulating during the storms. Second, the ecology of the lake 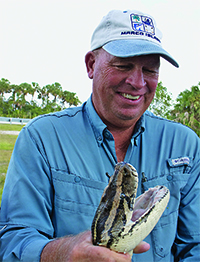 Changes in the ‘Glades have allowed snakes such as the Burmese python to take over certain areas. Bob will talk about this on February 22 at 7 PM at the Rose History Auditorium. Stop by to learn more!

would be harmed if water levels became too high.

Sea grasses at the bottom of the lake depend on sunlight to grow. As the water deepens, the sun will be less effective and plants might die. If plants die, the whole marine population could change which, in turn, affects the animal life depending on fish.

Even today, as our summer storms cause the lake level to rise, water is released for the same reasons mentioned above. Historically, there used to be many areas in south and central Florida for the water to be stored. This 4,000 square mile basin north of the lake no longer exists. These upland and wetland areas have been developed. By default, Lake O is now the storage facility.

The installation of the dike began in the 1930s, and was built to standards compliant to that time and to the knowledge of that time. It is an earthen dike covering 140 miles of shoreline and, to put it as simply as possible, it leaks. The foundation below the lake has layers of limestone, gravel, shell and sand. These zones are prone to seepage.

The development of the dike and the drainage of waters to the coastal outlets were meant to be an opportunity for man and nature to live in harmony. We are discovering that something is out of tune, and has been so for a while.

Citrus groves and sugar cane fields neighbor each other, generating thousands of jobs and more than $1.5 billion annually.

Restoration plans and additional solutions are currently on the table. Some are in the works, some, well, let’s just say that there is a lot of talk going on.

Our magnificent and necessary Everglades can be salvaged. Keep your eyes and ears open for more information. To quote the Terminator “I’ll be back!”

Bob is the owner of Stepping Stone Ecotours, conducting walking tours of the western Everglades. He is also a naturalist for a dolphin survey team on Marco Island and is the author of the wildlife pictorial book “Beyond The Mangrove Trees.” You can contact Bob at www.steppingstoneecotours.com. Bob loves his wife very much!