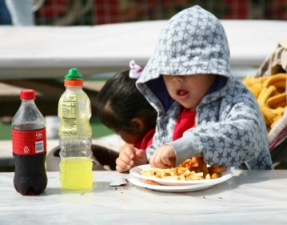 Everglades Seafood Festival: Ya don’t have to see it to eat it! Submitted

Imagine 50,000 people in a town with a permanent population of 500. That’s what happens during the first weekend in February when Everglades City holds its Seafood Festival.

Visitors come from all over Florida and beyond to sample the food and listen to top Country Music groups entertain on the big stage in front of City Hall. The streets are cordoned off so that walkers can stroll past hundreds of craft booths and enjoy their meals at picnic tables under shade-giving tents. For the kiddies (and those young-at-heart) there are the carnival rides and games you’d expect at a country fair.

Everglades City, on the fringes of the Ten Thousand

Islands in Southwest Florida, is known as the “stone crab capital” for its harvest of these delicious delicacies. The City was settled in the 1880s and was once the seat of Collier County, as evidenced by the majestic old Courthouse building which is now Everglades City Hall. When the population density shifted to Naples, the little remote town returned to its self-sufficient roots.

In 1970 residents held the first Seafood Festival to pay for playground equipment in the city park, named after long-time mayor Daniel W. McLeod.

The goal is still to raise funds for local good causes and scholarships. A 501(c)(3) notforprofit organization called the Betterment Association of the Everglades Area, Inc., runs the Festival. For more info, see www.evergladesseafoodfestival.com or phone (239) 695-4100.