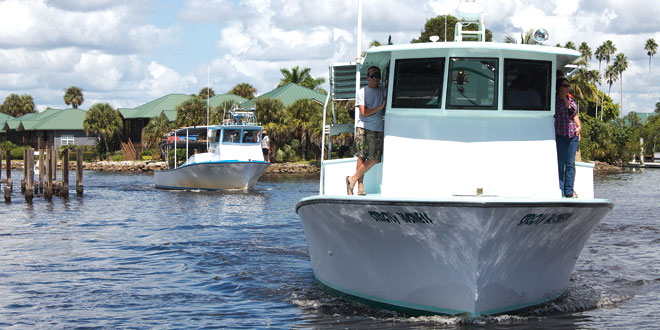 Restaurants and fish markets will be serving up the tasty delicatessen that is the stone crab claw beginning October 15. Many of those claws may very well come from Everglades City where a slew of commercial stone crabbers work and live. What has now become a tradition, the Annual Blessing of the Fleet, took place on September 28 at the historic Rod and Gun Club.

The Blessing, which began five years ago by Everglades City transplant, Tod Dahlke, has become one of the city’s favorite days of the year. It was filled with flowers, frogs, raffles, coconut guava cakes, arts and crafts for sale and much more.

One young boy reaches for the frog that slipped from his hands just before start of the race. PHOTOS BY NATALIE STROM

1 PM, starting with the frog jumping contest. Children of different age groups chose a frog, all of which had been caught in the area the night before, hoping to be the big winner. And suddenly, frogs were flying everywhere! The slippery amphibians wiggled their way out of young ones hands, causing chaos as the kids chased their frogs until they were once agin in their hands; they were then squeezed much tighter – much tighter – so they wouldn’t escape again.

Led by Tod Dahlke, children released their frogs on his count. It was a mad dash to the finish line for those frogs, and the children eagerly chased them, grabbing them, squeezing them tight and

Every boat was blessed with a prayer and holy water.

holding them up in the air, hoping to be the victor. Soon it was the final race, featuring one child from each age group. And on Dahlke’s count, the finalists released their frogs. It was close, but in the end, seven year old Teddy Smallwood and his prized frog won first place. Trophies were given to the top three winners, and Tod quickly brought out a treasure chest for the rest of the kids that was filled to the brim with prizes. Those who watched were certainly entertained, laughing at the follies of the young children trying to maintain control of their frogs.

“The kids love it,” stated Terry Gizzi, mother of Tod Dahlke, in regards to 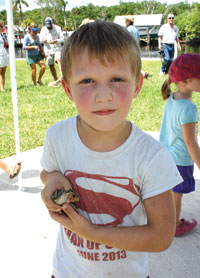 Eight year old B.J. Richards held his frog close as he prepped for the next race.

the frog races, but also the day as a whole. “It really inspires the boaters to know how much we all care because we know it’s their living. It makes the Captains feel good, too.”

According to Shannon Miller of Everglades City, four churches in the area were a part of the blessing: Everglades City Community Church, Copleand Baptist Church, Chokoloskee Church of God and Everglades Baptist Church. At 2 PM, pastors or representatives from all four churches waited with the crowd as the stone crab boats arrived. A prayer was said within the outside terrace of the Rod and Gun Club, asking for God to bless the boats, guide the Captains, allow them a prosperous season

Kit Kat and its Captain and crew received a blessing.

and a safe return.

Flower girls spread fresh petals along the edge of the dock as the boats tied up to shore. A total of eight boats were blessed, including a father and son team, each with their own boat, Kit Kat and Serious Addiction. Both boats were painted in white with teal accents as well.

Pastors stopped at every boat, said a prayer with every family and then blessed the boat by dipping a palm frond in holy water and making the symbol of the cross. Soon it was time for the coconut guava cake judging contest. All nine cakes in the running were beautifully decorated – some with flowers, others with frosting. One cake even had

a guava made out of frosting sitting on top. Judges Patty Huff, Vonice Rigney and Crystal Potter were served slices of every pie by Dahlke. While each looked and tasted delicious, it wasn’t easy attempting to eat every slice! The winners were mother and daughter team Joanie Griffin and Terri Rementeria.

Live music played in the background, booths were set up for different organizations, people feasted on roasted pig platters, the kids made a big splash in the pool and arts and crafts tents lined the open area outside.

Overall, those who came to support the stone crabbers – from both near and far – had a wonderful time celebrating what has now become tradition and will surely continue to be so for years to come.