It’s nice to be missed. By the time this story is published I will be back on the island and back to the grindstone after spending nearly six weeks on a “working” vacation in Europe. From what I have heard so far I didn’t miss much around these parts.

Years ago my friend Tom had characterized the island in the summer as “Mayberry with sand” and he could not describe it better. I will leave it at that and you can fill in the blanks with your own summer experiences! As many of my friends know when the opportunity arises for me to vacate the island in the summer, I vacate with the utmost joy and Godspeed.

That said, the European trips are always an enjoyable learning experience even for an old dog like me. I dare not use that term in the same sentence when describing my young and oh so lovely wife, Andrea, who accompanied me. Needless to say we always look forward to our summer sojourns in Europe for both work and pleasure. And, lately several of our friends have been bitten by the bug, so we have not been traveling alone.

The trip began in Sicily with my friend Albert, then on to sunny Mallorca, Spain where Al had to end his adventures and go back to Marco to attend to the inevitable something he called …work?

While still in Spain, I hooked up with my wife and our mutual friend and traveling companion, Darlene, who both tried unsuccessfully to delay my early departure from the island due to some silly tennis championship finals in Orlando.

The ladies’ rest in Mallorca was short lived for soon the “three amigos” flew off to Dusseldorf, Germany to pick up yet another wayward traveler, my wife’s tennis teammate and friend, Mary.

We hastened to board another flight and soon we found ourselves enjoying lunch in the shadow of the Cathedral of Notre Dame in Paris.

Whew! This trip gets more interesting year after year. I should start my own See All of Europe Tour Company!

The four of us spent several days in the “City of Light” exploring the innumerable shops and stores looking for the unusual in jewelry and ladies’ fashion. But alas the clock is ticking, time to move on to Naples on mainland Italy.

This included driving the coast to the picturesque towns of Positano and Amalfi and a lovely day spent on the very popular Island of Capri. Capri has some of the most expensive jewelry stores in Europe, diamond and gemstone pieces worth millions of Euros, on display in the shop windows.

I have to hand it to my traveling companions, for the going was tough and even physically demanding due to the miles of uphill walking and tromping about on cobblestones hither and

yon, from villages to towns and streets to alleys.

We also pushed and strained our trusty rented Opal station wagon which groaned on any road that presented even the most minuscule of inclines. It was upward and onward to Rome, Florence and my personal favorite, the Tuscan country side.

I have to admit the pace was beginning to take its toll on all of us. Time to relax and recharge. It was a Godsend that the next few days would be spent in the Tuscan Chianti wine region.

I love Figilini Valdano. This one mule town is nestled in the Tuscan countryside twenty-five miles south of bustling, tourist filled Florence and to make it even better we were staying at the quiet villa of my friend, Chef Claudio. Over the past few years Chef Claudio has become quite an Icon. When I met Claudio more than ten years ago he had a small restaurant in town and barely spoke a word of English. Today he teaches both accomplished chefs and beginners how to cook food and make homemade pasta in the Tuscan style.

(Just google “Chef Claudio Tuscany” if you are interested.)

This part of the journey was not only the high point but also where my waist line took the worst punishment of the trip.

This I’m sure was the ladies’ high point too, for they enjoyed a free five hour cooking class with the chef and even served the results of their labor to patrons of the restaurant that evening.

We spent the days browsing and enjoying one of the biggest jewelry capitals of the world…Florence, where I talked to many shopkeepers to get a gist of what will be hot and what will not before placing orders. Later in the week we spent an afternoon in the medieval city of Siena where the ladies purchased many pieces of fine Tuscan porcelain.

Once again the road was calling to us. We headed north to Munich in southern Germany, and on the way we stopped in Fussen to view the famous Neuschwanstein, or Swan Castle in Bavaria. The weather was not so good yet it could not dull the beauty and grandeur of this amazing edifice.

I can ‘t explain the enjoyment of seeing what the future holds in new and exciting jewelry that has surrounded me in Europe, and which eventually will make it to the U.S. You can’t get any closer to the curve or cutting edge of style or fashion design than the expertise of Paris or Florence and believe it or not, the city of Pforzheim in southern Germany.

Once again we found wonderful things from both known and unknown designers. I dare not reveal any designer or company names for fear of showing my hand to my competitors who may also read this article. What keeps me in business 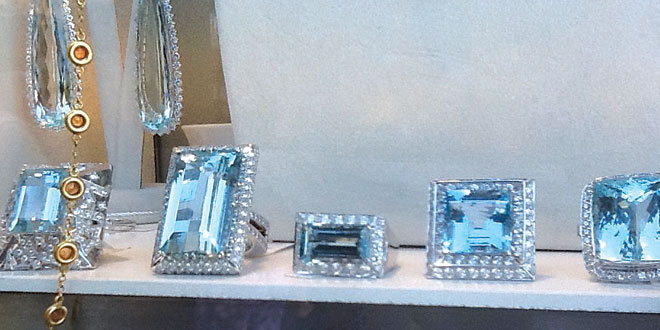 during these tough times is the fact that what I offer in my shops is truly unique and unusual, just what my customers and I have come to appreciate.

What I can talk about is ….color has made a large comeback, both in genuine and synthetic gemstones, I did notice a lot of combinations of tiny pave’ diamond pieces but my past experiences with stones constantly falling out with daily wear or constant re-sizing leaves a sore spot with me.

Bold designs, large necklaces and bracelets that did tremendously well last season are still hot. Heavy gold designed pieces, though prevalent all through Italy, are still a tough sell here in the States and at this point of the game, would be a sure way for me to lose my shirt. So gold and silver combinations it will be!

The red coral jewelry I saw in Amalfi is a hit with the tourists, though most of the pieces were cheap or poorly made. But I did discover a small shop with a crafts person who made his own quality pieces and I will test the waters on the island for demand with red and pink coral accented with gold.

Amber jewelry is popular in Europe but I feel the demand here on the island is still hot and cold. Nevertheless, I got some and we will see how the market responds.

Paris will always be our favorite hunting ground because the little shops on the maze of side streets are endless with possibilities. We never know what surprises await us in these charming shops.

My wife Andrea, who also happens to purchase the latest ladies’ fashion in apparel for our two Richard’s Reef boutiques was more than pleased by the selections she made for what is to be in demand in the coming season such as blouses, dresses and sandals. I know this may sound crazy, but sometimes having the latest styles can be a double edged sword. We often find styles so new that they have yet to be seen in fashion magazines or advertisements, and often when my wife or I display “what’s new” in our stores, it is met with folks scratching their heads and questioning “what is it?” In some cases we hold off to avoid shocking the island’s conservative population. Yes, I said it! Before that comment is misconstrued, I still see there are guys on the island wearing “members only” jackets and 1980 analog watches. That is living proof for me.

In closing, the trip was more productive than we expected and certain cities we visited were busier than previous years. Was it because it had been a great year for wine? I only hope I can locate the exact source so I can bring several cases back to get things on the island jump started. Cheers! Prost! And Salute!

Time for The Rebirth of The Amulet?Greetings and Salutations