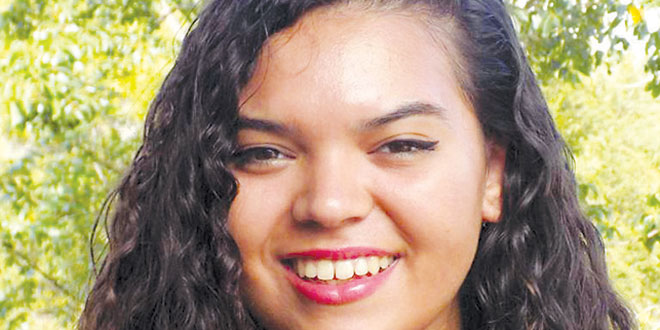 Duneshka Cruz doesn’t have a lot of spare time on her hands.

She is a senior at the Marco Island Academy, and is carrying 8 courses, plus teaching a course in Forensic Science as a teacher’s assistant. With the addition of online courses, she has managed to maintain a 4.68 weighted GPA in the 25 courses she has completed since 9th grade. The vast majority of these courses were either Honors courses or AICE courses. AICE (Advanced International Certificate of Education) is written and overseen by the University of Cambridge in England, ranked as one of the world’s top five universities. As with honors courses, these classes cover more in depth and advanced material. The courses may require independent research.

In her sophomore and junior years, Duneshka managed to complete 18 courses (including 3 online), receiving straight A’s in all 18. All but 3 were honors or AICE courses. She was elected vice president of the student council last year and is president this year. She plays on the MIA golf team and last year, was voted most outstanding player. She was just inducted into the National Honor Society. In addition to the volunteer hours required of all students at MIA, Duneshka enjoys reading, watching crime/forensic shows and historical/period movies, and traveling with her family.

Cruz says her proudest accomplishments are helping to bring some cheer and encouragement to children with debilitating and terminal medical conditions. As reported in the December 2, 2014 issue of Coastal Breeze News, Cruz “runs her own non-profit foundation — Project Fairy Dust and Magic Wands — which sends handmade sequin tiaras to young girls who are facing difficult challenges in their lives whether it be illness, parental divorce, problems with bullying, the death of a loved one or the military deployment of a family member.” She got the idea from her mother, who made tiaras for local cancer patients in Miami. Cruz says she was “ deeply moved by the uplifting affect these tiaras had on the young “princesses” who received them. “I wanted to find and serve more of them.” Through her Facebook page, Cruz has had requests from as far away as Chile, New Zealand, Australia and the UK. Cruz figures that she and her mother have made and sent out over 100 tiaras, at no cost. Money is raised through local events such as garage sales and on social media. Cruz handles all the administrative work, and her mom makes the tiaras.

More recently, Cruz has become involved with the Make-a-Wish Foundation (MWF) of Southern Florida. She became aware of MWF through social media. “I immediately realized 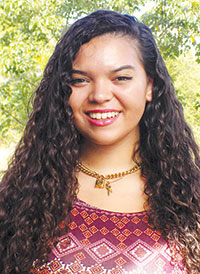 that this was something I wanted to do,” Cruz said. “MWF reminded me of the Project Fairy Dust Foundation. MWF was a way to reach even more kids, who could use some cheering up. Being able to do this is probably the most fulfilling thing that I do.” The MWF was founded in 1980, after a seven-year-old leukemia victim, through the generosity of his friends, was granted a wish to spend a day as a police officer with the Arizona Department of Public Safety. The boy died soon thereafter. The credo of MWF was, and remains, “We grant the wishes of children with life-threatening medical conditions to enrich the human experience with hope, strength and joy.” MWF finances its endeavors through corporate sponsorships, special events, foundation grants and individual contributions.

In 1983, MWF established a South Florida chapter. Their fundraising includes a Youth Leadership Committee (YLC), consisting of high school students, they being among the most highly motivated. The Southern Florida YLC consists of about 23 high school students from Lee and Collier counties. They meet once a month at the Marriott in Ft. Myers. Cruz joined the YLC last year and was promptly elected vice president. This year, she was elevated to the presidency. As such, she conducts meetings, chairs the executive committee, and makes sure that everyone is meeting their fundraising quota and arranging an awareness event. It is a lot of work, but Duneshka believes that making these wishes come true can be encouraging to both the kids and their parents in adhering to difficult treatment regimens. Last year, the YLC raised over $30,000. An MWF prospectus reports that their South Florida chapter is granting a wish at the rate of one every 16 hours.

For Duneshka, the really hard stuff will begin next year. She has always been fascinated by forensic science and intrigued by stories of seemingly unsolvable crimes being cracked by forensic analyses. “The forensic science course I took in my sophomore year kind of sealed the deal for me,” Cruz said. “It removed any doubts I may have had.” Cruz is particularly interested in the forensic science major offered at Pennsylvania State University. It is a grueling 124 credit hour curriculum, which from the prospectus, looks suspiciously like a triple major in forensic science, biology, and chemistry. “This curriculum will satisfy all pre-med requirements, paving the way for med school,” says Cruz. With an MD degree, Cruz will be able to make her own wish come true, and become a medical examiner immersed in forensic pathology. One day, future forensic wannabes may be watching a TV series based on Duneshka’s cases.