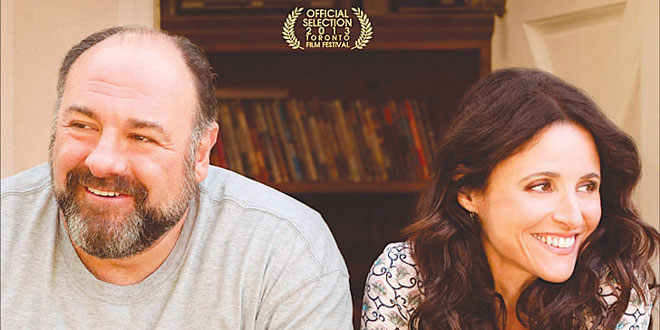 Eva (Julia Louis-Dreyfus) is a divorced masseuse with a daughter, Ellen, about to enter college (impeccably played by Tracey Fairaway). Albert (the late, great James Gandolfini) is a divorced father of a girl also bound for college. Thus begins “Enough Said,” a charming little comedy that gets into the foibles of middle class, middle aged life in California.

Eva has a self-deprecating sense of humor that sustains her through her loneliness. She lives for her job, daughter and a few very good friends. She meets Albert at a party, and they share a few laughs. Later she meets him for a real date, and the inevitable occurs. They wind up in bed together. This relationship matures into something more until an interloper emerges.

In the course of her masseuse activities, Eva gets a new client (Catherine Keener) who is a pretentious poet with, yes, a daughter destined for college. Poet Marianne is not shy about talking down her ex-husband 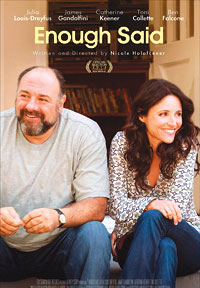 as fat, slovenly and a loser. Even as she constantly feeds Eva with her put-downs of her unnamed ex-husband, she dazzles Eva with her appearance, poise and command. Eva is also very taken by Marianne’s apparent friendship with Joni Mitchell.

Ultimately, between endless dragging of her masseuse table for endless massage sessions, Eva discovers that Marianne and Albert are the divorced couple with the coddled daughter. Fat Albert is the bad guy of all the anecdotes! The movie takes off from the revelation to probe whether and how Eva and Albert will overcome all the carping, and complaining from the ex-wife.

There are two nicely played sub-plots as well: The mother-daughter relationship is compelling, and Eva’s close relationship to Chloe, a needy daughter of Eva’s close friend is nicely depicted.

Louis-Dreyfus and Gandolfini play well off each other, and there are some witty lines. The film moves casually, and has its slow moments, but is worth seeing for some wit and fine acting. There’s a sad touch as we realize that this was James Gandolfini’s last work.