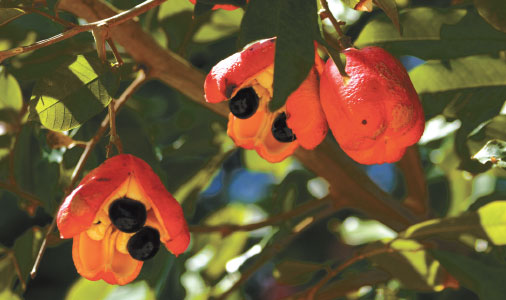 Before we visit the many more islands of the Caribbean, I would like to introduce you to the many exciting and unusual foods and recipes that are popular and different from island to island. Many kinds of fruits, vegetables, grains, meat and fish are common to each island. The differences are in how each country combines and uses these raw and natural resources. Even with a similar culture and many of the same foods, each region prepares them differently. I personally found this aspect of the cultures most fascinating.

For example, Spanish speaking people in Venezuela cook differently from their Spanish speaking cousins in Puerto Rico. Many factors from all the different people of the world, contributed to the variations in the preparation of food. Even if they all spoke the same language, their traditions and languages melded with the people of their new countries. The people in the new countries adapted some of the customs from the newcomers and vice versa, thereby creating new and combined ways of cooking and doing things.

I had to learn almost a whole new vocabulary when talking about unfamiliar foods and ingredients in different island nations as well as South America. One of the most 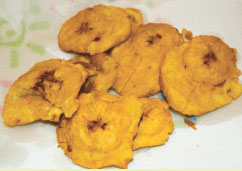 mentioned was Ackee which is a popular food throughout Jamaica. It was first introduced to Jamaicans by Captain Bligh who brought it back from West Africa.

Ackee is poisonous if eaten before it is fully mature. Never open an Ackee pod; it will open itself when it ceases to be deadly. You can buy Ackee sold in cans in West Indian markets. I must be honest: I never tasted it, but my husband did down island and is still very much alive.

Another well known island staple is Breadfruit. The breadfruit is a large green fruit with pebbly green skin and potato-like flesh. It is very versatile and can be baked, grilled, fried or roasted after being stuffed with meat.

Callaloo is a leafy, spinach-like vegetable. It can be made into a soup or cooked like spinach. It is also known as Chinese spinach or Indian kale.

The islands are known for their very hot and spicy foods. Chili Peppers are part of the Capsicum genus and can range from medium to fiery hot. Scotch bonnet peppers are one of the most widely used “hot pepper.” Take my word, they are hot!

Chorizo is a Spanish sausage made with pork, hot peppers, and garlic. Of course, 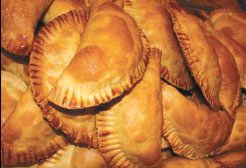 conch is very much on the menu in the Caribbean Islands as it is very versatile and available. However, if you read a previous article of mine on conch, you will know that it is being over used, making conch scarcer.

Interesting enough to me is that the native people have a huge variety of natural ingredients from which to choose. Goat is very popular in the islands. The story told is that the immigrants from India searched in vain for lamb to prepare their staple of curry. Finding no lambs, they used the next best thing to take their place, goats. It was not too long before curried goat became a Caribbean classic.

One of my favorite finds down island when we were there was plantains! Having sailed down to the islands from Connecticut, I do not remember ever seeing a plantain before. They are in the banana family, but are inedible raw. They are used a lot in Caribbean cooking. As they ripen, they become sweeter. I especially love fried plantains in butter with brown sugar sprinkled on them. 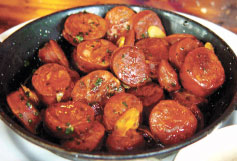 aka Manioc or Yucca.

When you live on your boat and cruise to many different island nations and countries, there are many varied ad­ventures that you can enjoy and experi­ence that are unique to where you are at the time. Each island has its own native foods, language, historical sites, culture, music, beaches, mountains and so on. Some islands are similar such as St. Mar­tin and Martinique since both are French in background. Two other island groups are close in distance, but are miles away in culture, foods and education: Turks and Caicos and Dominican Republic, for example.

Writing this makes me salivate just thinking about all the new and exciting things I learned to eat and enjoy. I barely scratched the surface of these new, at least to me, and exciting foods to try. Now that we are living here, I certainly get a chance to see, taste and buy some of what I once thought were exotic foods. We sailed a long way from the New England shores which are home to lobsters and cod fish to the lands of pinchos and empanadas!