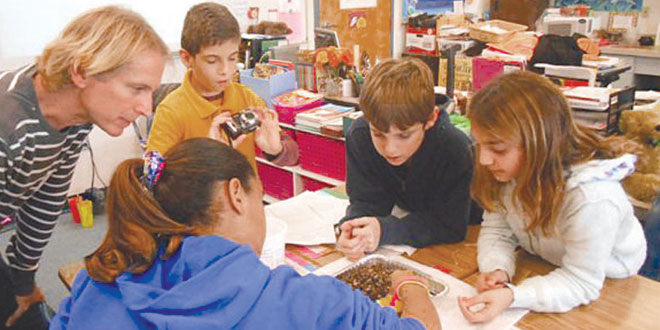 It has been said that play is the purest form of research, and the fourth-grade students in Gail Dunphy’s class at Tommie Barfield Elementary School have put this statement to the test.

Since November, TBE’s entire fourth-grade team has been engaged in a classroom science project that combines engineering and technology to challenge students to devise a solution to clean up an oil spill. The project is part of the STEM — Science Technology Engineering and Math — program at TBE, and was developed by the Museum of Science-Boston through its National Center for Technological Literacy initiative and Engineering is Elementary curriculum.

TBE’s fourth-graders were the only ones in Collier County conducting “Project: Clean Up Oil Spill,” but Dunphy’s class took the project a few steps further. Now, its approach may become a model for other Collier County public schools interested in doing the project in the future.

“In this paper, pen and pencil test world, you don’t get better than a hands on projects like this,” says TBE technology teacher Jody McCarty.

The project actually began last summer for McCarty, who attended a special training session for the STEM program. Collier County Public Schools offered the training to its science and technology teachers. McCarty worked through the project as a student, learning how to apply its lessons in the world. Then, in the fall, she brought the project to TBE.

McCary worked with TBE’s fourth-grade team to integrate the project into the science curriculum. She jump-started the project in her technology class with the prep lesson, which focused on defining and discussing engineering and technology and how they are used in the world.

The fourth-grade classroom teachers took over from there conducting the four lessons of the project (see information box). The main event: A class experiment centered on cleaning up an oil spill on a beach. A test beach, or ecosystem, was created in an aluminum pan, completed with rocks and water. Vegetable oil with food coloring was floated on the water and infiltrated the beach area. The students were to engineer a clean-up solution using a combination of 10 materials — felt, nylon, spoon, pipette, coffee filter, sponge, cotton ball, rubber band, yarn and craft sticks.

Once the experiment was complete, it was back to the tech lab to record the findings on Discovery Education’s Board Builder application. McCarty challenged the fourth-grade students to build a science board like their fifth grade counterparts for the Science Fair each year, complete with a title, thesis, research, media boxes, materials, procedures, and sourcing and bibliography.

TBE principal Dr. Jory Westberry was pleased her fourth graders were taking on the task. “When I first 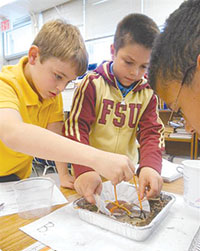 heard about the project, I thought it was very timely and relevant,” she explains. “(Its components) are part of our increased interest and emphasis on STEM.”

According to McCarty, Dunphy’s class took the project to a whole new level, incorporating life skills and budgeting and learning how businesses conduct and award bids for projects. The students were divided into six groups and created their own environmental clean-up companies: B.N.T. Co., N.R.N. Co., The Clean Up Crew, Oil Clean Up Sweepers, Lucas’ Cleaning Co. and Clean Up Masters Inc.

The student companies were told a big business needed to clean up an oil spill in the Gulf of Mexico. The budget for the pretend effort was $20 million, and each company was asked to engineer a solution for the big business; test it; re-engineer it if weaknesses were present; retest it; and formulate a bid for the big business based on their results that remained within the $20 million budget.

Each group member was given a specific job — buyer, builder, note-taker or photographer. Once the student companies completed a clean-up solution, they tested its success by skimming the top of the water with a piece of clean white paper. If the paper picked up blotches of oil, it was back to the drawing board.

The students learned about the clean-up efforts employed during the BP/Deep Water Horizon oil spill, and attempted to mimic some of them with the 10 materials at their disposal. For example, floating booms used to contain oil from the BP spill were similar to yarn, felt and rubber bands. Dunphy’s students found that those materials best at containing oil were cotton balls, yarn, coffee filters, rubber band, sponge and popsicle sticks, and those materials best at removing the oil were yarn, sponge, rubber band, cotton ball, nylon and felt.

In the end, the winning bid was for $5 million from N.R.N. Co. It used a coffee filter over a piece of yarn to allow for two-layers of absorption. Nicole Geddis and Reid Castillo, members of N.R.N. Co., both say they learned a lot from the experiment.

“Oil spills can harm a lot of things,” notes Castillo. Geddis adds that she discovered just “how serious (oil spills) are and how they harm ecosystems.”

Throughout the course of the project, Dunphy’s 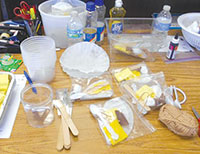 Students could choose a combination of 10 materials to engineer a technology to clean up the simulated oil spill.

students also benefited from a special guest teacher, Marco Island Realtor Jeff Compton. Some may not know it, but Compton spent nearly 20 years as an analytical chemist working for a specialty chemical manufacturer.

He stumbled upon Dunphy’s project when he was invited to the TBE Science Fair by Geddis, who is a friend of the family. As a former TBE student, Compton was only too happy to attend. While speaking to Dunphy, he learned of the class project, and Dunphy learned about his background in science. It was serendipity.

“(Mrs. Dunphy) asked if I would like to participate in the lesson,” Compton explains. “I read the material, and decided it was a great lesson that was applicable to our everyday lives here on the Gulf coast.”

Compton was impressed with hands-on nature of the experiment: “Reading is great, but when it comes to learning, nothing beats hands-on trail and error. The students had a great time, and learned more than a book could ever teach.”

In fact, the experiment harkened back to Compton’s own time as a student at TBE. Back then, frequent visits by the biologists from The Big Cypress Nature Center (now The Conservancy of Southwest Florida) had a big impact on him, and sparked his interest in science.

In Dunphy’s classroom, Compton was both student and teacher. “I explained the real world details where business, science and environmental responsibility must all work together,” he notes. “Then I got to get my hands dirty, and worked with each group as they engineered an oil spill cleanup within their model ecosytem.”

At the close of the project, he emphasized that every experiment isn’t a success. “Nothing is a really a failure as long as you learn from it.”

For Dunphy’s students, TBE’s fourth-grade classes and future fourth-graders in Collier County, there is no doubt “Project: Clean Up Oil Spill” was a success. Currently, school district officials are considering the use of Dunphy’s method as a prototype for conducting the experiment in other school STEM programs throughout Collier County.

Westberry is proud of her fourth graders and their teachers, and admits that without STEM experiments like “Project: Clean Up Oil Spill” students would lose a wealth of knowledge. “First of all, hands-on projects of this level engage learners and let them experience relevance to the world outside the school walls,” she states. “Second, when we utilize these projects at young ages, skills and competence increase, and their problem-solving ability becomes more fluid and effective.

“We’ve had integrated units in many subjects, but STEM focus is changing the way we plan those units so that more science, engineering and technology are included. These are the foundations of thinking that will shape the future.”