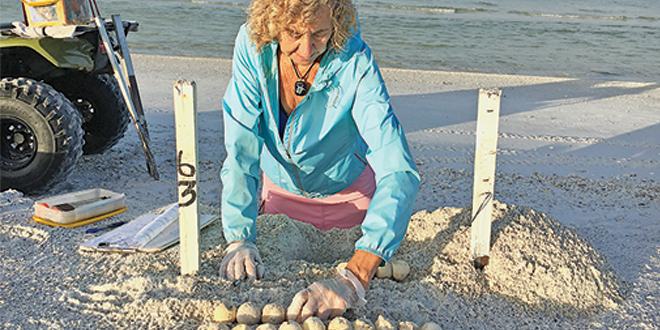 It was early Saturday in mid-October and Mary Nelson, Marco’s “Sea-Turtle Lady,” was already out on Sand Dollar Island with her ATV checking out the few remaining sea turtle nests. The nesting season is coming to a close, and there may be a few “Halloween” hatchlings.

It takes sixty days for the soft shelled ping pong sized eggs to hatch. Today, Mary has already excavated a nest. This nest had been compromised by the storm surge brought by Hurricane Hermine in early September. Still, she will need to complete her findings. Only 12 eggs hatched (about one in five) and to complete her report, she had to open each egg to note their various stages of embryonic development. Mary is also working against the incoming tide, so she enlisted the assistance of a couple of beach walkers to complete her task quicker. As she dissected each remaining egg, 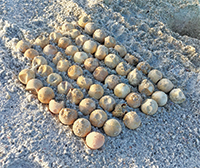 the volunteer wrote her findings on her notepad. Once finished, Mary deposited the broken eggs back into the nest and covered it with sand.

With the storm surge brought by Hurricane Hermine, sea turtle nest eggs on Marco Island were covered with water from mid-beach to the dune areas. Water washed away some of the nests, and for those that survived, nests got waterlogged in their late stages of development.

As of October 10, 2016, year-to-date, Marco Island recorded 52 hatched nests from 79 identified nests. It is estimated that only one hatchling in a thousand will make it to adulthood (15-20 years). After mating, female loggerheads travel thousands of miles to the beach, where they were hatched to dig a nest, lay their eggs, starting the cycle all over again.

Studies have shown that the gender of a hatchling is determined by the temperature at which it incubates. Eggs incubating at cooler temperatures turn into male sea 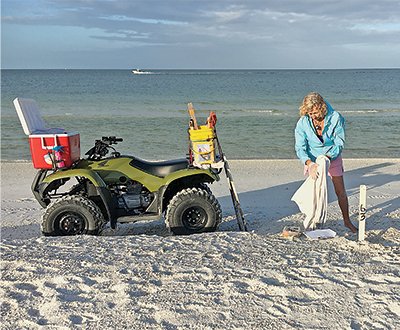 Mary all finished and getting ready to head back to central beach.

Food for thought: If temperature affects the gender of sea turtles, would climate change affect their population in the future?

•Floating plastic bags, balloons and food wrappers are ingested by sea turtles making them sick, starve and die. Much of the plastic debris starts from land.

•Discarded monofilament lines appear to be the principal source of entanglements of sea turtles in U.S. waters.

•Artificial lighting during nesting season – sea turtles depend on a dark and quiet beach to nest.