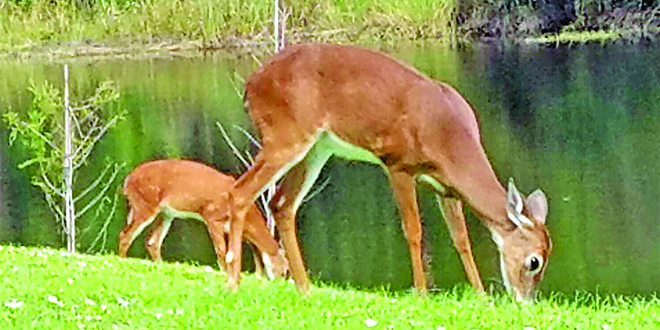 What a wonderful time of the year! There seems to be excitement in the air and happy greetings everywhere as people are getting ready to celebrate Thanksgiving, and then Christmas or Hanukah. Of course, we are excited and happy because many of us will be with family and/or friends, but NOT in the snow! My Amish friend, Fannie, said they had a blanket of snow last night; and people in my church, who were from Michigan, said that Michigan had 25 inches of snow last night! I was glad I was looking at sunshine and feeling the beautiful warmth of Florida.

• Our Marco Island Kiwanis Club, the East Naples Civic Association, and the East Naples Kiwanis Club learned a little more about the upgrade to the Naples Outlet Mall on Collier Boulevard, which has already begun by removing some of those dated metal accoutrements from the outside of the building, and eliminating the second-hand stores and consignment shops that never belonged in an outlet mall setting in the first place. Next they will paint the building white. They hope to complete phase one by the end of January.

• Speaking of the Marco Island Kiwanis Club, one of the members, Tim Clune, mentioned at the meeting that he had driven to the East Naples Community Park to play pickleball and ALL OF THE COURTS were in use and there was a waiting list! I couldn’t believe it, especially at this time of year. I exclaimed, “All 54 courts were in use?” “Yup,” was the reply. That is amazing! There must be a lot of action and friendliness at that park as they enjoy watching each other and learning from others. At last count, 1,200 people have already signed up to play in the U.S. Open Pickleball Championships next April 23 to 30. There were 837 players last year (the first year) from 37 states and eight countries!

• The administrator of our Growth Management Division asked the developer of Treviso Bay if we could take a tour of their community (because I was curious as to how it is developing). They are almost completely sold out, the landscaping is gorgeous, and the deer roam very openly. There are other animals, but they are a little less open about their wanderings. The developer took the picture included with this column…while we were watching! It’s a lovely development with a TPC golf course and a magnificent clubhouse. The homes range in price from the condo price to the mansion price, and everything in between. The Treviso Bay Boardwalk is a 931 linear foot-long boardwalk through a Cypress Dome Preserve, with another boardwalk spur that arrives at the lakeside dock. There are four park benches located along the boardwalk, with the environmental education artwork panels placed by each, and painted by local artist, Shelly Castle. This nature path boardwalk design is state-of-the-art, with recycled PVC handrails. You’ll find that most of the developments being built in East Naples focus on nature. Treviso Bay borders Rookery Bay, and each new resident is asked to take a course from Rookery Bay on the nature surroundings and how to care for them. The developer, Lennar Homes, also sends a donation for each new home sold, to Rookery Bay to help keep the area in the pristine condition we all enjoy so much. The same type of nature preservation is also being used in Minto’s Isles of Collier Preserve, and in the new Naples Preserve, being built behind Reflection Lakes off U.S. 41E, east of Collier Boulevard. This will be the last large development built in East Naples.

• The East Naples Merchants Association will be hosting a Christmas Party on December 8th as a fundraiser for Laces of Love, featuring fantastic food and holiday cheer (hmm, wonder what “holiday cheer” means?). The menu consists of a beef carving station, coconut crusted shrimp, chicken quesadilla, vegetable spring roll, spinach and artichoke stuffed mushrooms, pork pot stickers, and so much more. One complimentary drink ticket will be given when you bring a new, unwrapped pair of tennis shoes for the needy school children in East Naples, and donated to the Laces of Love Foundation. A cash donation can also be given instead of shopping for the shoes. Boys closed toe sneakers are needed in sizes 1 to 8, and girls closed toe sneakers in sizes 1 to 8. You can shop right here at Marshalls, Payless, Walmart, Beall’s, or Target or Shoe Warehouse on Airport Road. Cost for this event is $35 per person, or $60 per couple. Dress: Country club party/casual. No denim or cargo shorts, collared shirts for men. Checks payable to Laces of Love must arrive no later than Nov. 30. Mail to East Naples Merchants Association, 8595 Collier Blvd., Ste. 107 – PMB#35, Naples, FL 34114.

• The 27th Annual Old Florida Festival was held recently at the Collier County Museum on the government center campus. It was probably the best one yet, and it made my heart sing to see all the parents who brought their children. The kids were enthralled with the reenactments, the World War II skirmish, the pioneers, the Revolutionary War camp, the firing demonstration, the Seminole war skirmish, and the music…Oh the music! Captain Joe & the Bottom Feeders, The Good Bad Kids, the Irish Dance and music by John Stey & Zach Miller. And as usual, there was Jacob Winge! I don’t know if you know Jacob Winge, a fifth generation Neapolitan, but he has been involved with the reenactment since he was a young boy and is still at it. His favorite subject in school was history, and you can tell it. He ran for school board a couple years back, in case you recognize his name. A nicer man you could never meet!

• It was exciting to read that our governor was down in Goodland eating stone crabs with his family, including grandchildren. I remember back in the 70s when my husband and I used to boat down to Stan’s in Goodland on Sundays. It still looks the same. It’s like stepping back in time to visit Goodland. They never change, thankfully. How nice to read our governor takes part in our community, just like the rest of us! Believe it or not, he even called me after the election to congratulate me on being re-elected. Wow, that’s impressive!

The Big Cypress National Park will be holding their free 6th Annual Swamp Heritage Festival on Dec. 3rd from 10:30 AM to 4 PM. Just drive to the family friendly event at the Big Cypress Swamp Welcome Center, 33000 Tamiami Trail East, in Ochopee. The keynote speaker will be Rick Smith talking about his father’s novel “A Land Remembered.” Learn and celebrate the history of early South Florida inhabitants, whose rugged strength and pioneering spirit contributed to the shaping of today’s unique and diverse culture. There will be live music, exhibits, food vendors, presentations and living history and folklore.